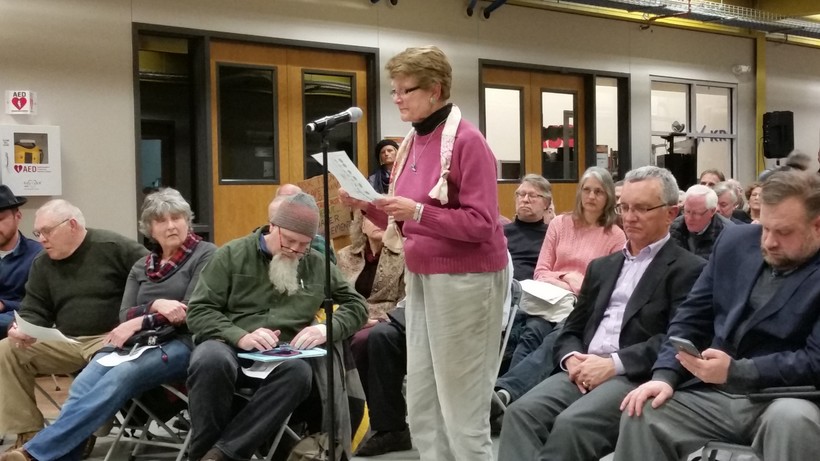 Melissa Warner of the Sierra Club speaks at Wisconsin Department of Natural Resources hearing Wednesday, March 7, 2018, about the proposal to divert water from Lake Michigan to Racine County for Foxconn's new manufacturing plant.

WisContext: Foxconn's Complex Path From And Back To Lake Michigan

Critics of a plan to help a Foxconn Technology Group factory take water from Lake Michigan outnumbered the idea's supporters at a hearing Wednesday held by the Wisconsin Department of Natural Resources in Sturtevant.

The hearing's focus was the city of Racine's application to divert about 7 million gallons of lake water each day, about 85 percent of which would go to the new Foxconn factory planned for just outside the Great Lakes Basin in the village of Mount Pleasant.

Dozens of people spoke against the plan during the hearing. Ken Anderson, of Genoa City, said the proposal violates the 2008 Great Lakes Compact, which states water diversion is mainly supposed to be for public benefit.

"What the water is being used for is one of the world's largest corporations, for private monetary profit," Anderson said.

But Mount Pleasant Village President David DeGroot said the lake water would be a safe drinking water supply for more than two square miles of his community "including for the anticipated thousands of Wisconsin workers who would be employed by companies within the area."

Some of the plan's critics Wednesday night also testified about the roughly 4 million gallons of water Foxconn would return to the lake, saying they feared the company's industrial sewage would contain chemicals that couldn't be handled by Racine's wastewater treatment plant.

Racine Mayor Cory Mason said Foxconn will have to treat its sewage at the factory before sending it to the city wastewater facility.

"Not on my watch are we going to let an application go through for a permit that wouldn't meet or beat every local, state or federal standard. As mayor of Racine and a (member of the city) wastewater commission, I will make sure that's the case," Mason said.

DNR officials said they will review Foxconn's application for a wastewater permit later this year. DNR action on the Lake Michigan water diversion proposal could come by May.