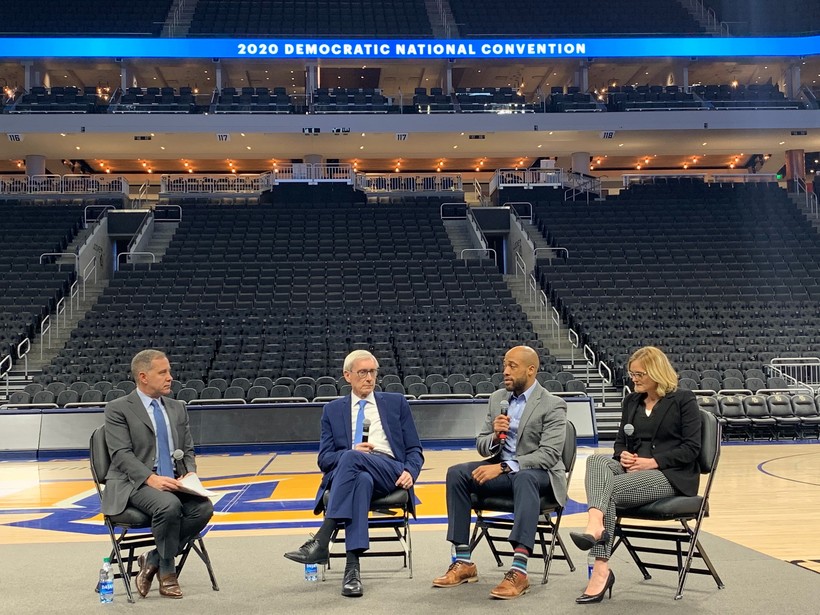 'This Is A Key State': Wisconsin Officials Reflect On Importance Of DNC

Gov. Tony Evers Focuses On Other Aspects Of Convention
By Alana Watson
Share:

The Democratic National Convention is six months away and many eyes are on Milwaukee as the city prepares to host nearly 50,000 visitors.

During the DNC’s first media walk through Tuesday, Gov. Tony Evers, Lt. Gov. Mandela Barnes, and State Treasurer Sarah Godlewski spoke during a panel discussion at Milwaukee’s Fiserv Forum to reflect on the importance of the DNC being in Wisconsin.

The four-day event held July 13-16 is expected to have a $200 million economic impact, and that isn’t the only aspect of the convention that should be focused on, Evers said.

"At the end of the day this is a key state," Evers said. "I truly believe that Wisconsin will be the state that elects a new president of the United States."

Evers said he’s making it a priority to ensure each Democratic candidate has the opportunity to come to Wisconsin to talk about the issues important to them before the summer convention begins.

"I think that will set the stage for what’s going to be happening in July in Wisconsin," Evers explained.

Barnes, a Milwaukee native, said it’s exciting to see the city in the limelight. His hope is that after the event Milwaukee and Wisconsin will no longer be taken for granted.

"We have this rich culture and diversity," Barnes said. "The kind of diversity that you need if you’re going to be successful in any sort of major political operation, especially a presidential election."

During the visit to the Fiserv Forum, where the convention will be held, Godlewski switched the focus from Milwaukee to the western part of the state. During the 2016 election, much of the western region of Wisconsin gave electoral college votes to now President Donald Trump, Godlewski said.

"They had not voted for a Republican since Ronald Reagan," Godlewski said. "It’s a part of the state that has a lot of blue collar, hard-working Wisconsinites that just want to get ahead; and as I travel the state, one thing I continue to hear is this theme of financial security."

Godlewski claimed Wisconsinites want a good middle class lifestyle, and they aren’t getting that with the current administration in Washington.

"Wisconsinites want you to show up," Godlewski said. "But on top of showing up they also want you to listen, and I think one thing that we did really in 2018 was we not only traveled the state, but we were listening to what people cared about."