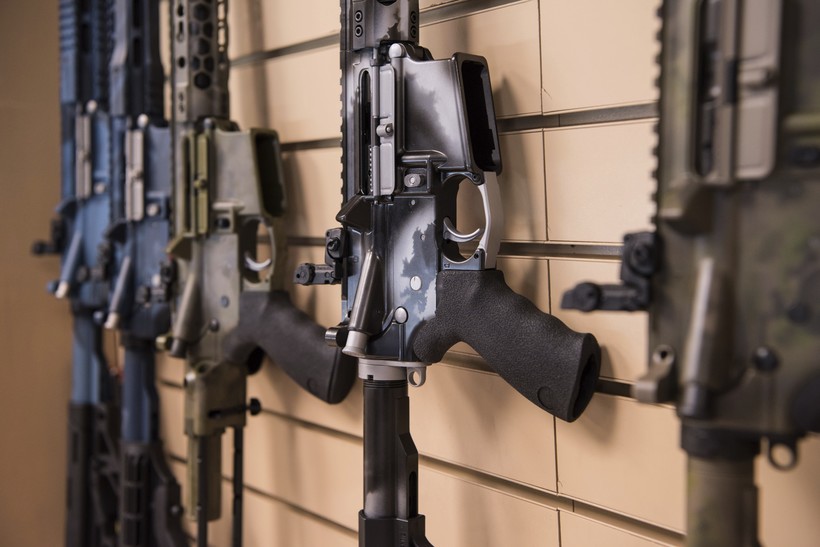 In this photo taken March 15, 2017, AR-15 style rifles made by Battle Rifle Co., a gunmaker in Webster, Texas, are on display in its retail shop. The gunmaker is one of more than 10,000 currently in the United States. President Donald Trump promised to revive manufacturing in the U.S., but one sector is poised to shrink under his watch: the gun industry. Fears of limits on guns led to a surge in demand during President Barack Obama’s tenure and manufacturers lept to keep up. Lisa Marie Pane/AP Photo

1 day after a mass shooting took place across the border in Illinois, county board moves to have fewer restrictions on guns
By Hope Kirwan
Share:

The Kenosha County Board voted to lift a ban on firearms in county buildings and oppose new gun restrictions, one day after a mass shooting left seven people dead in a neighboring county in Illinois.

The Kenosha County Board voted 14-7 to approve a resolution allowing people to carry firearms and electronic weapons in county buildings and on county-owned property.

The resolution changes a 2011 resolution that banned the possession of firearms on county property except for law enforcement officers. The new policy excludes the county courthouse, jail and other law enforcement-related buildings.

The issue has been hotly debated in Kenosha County in recent months. The Wisconsin State Journal reported a resident was arrested at a meeting in June after he refused to stop speaking when the County Board Gabe Nudo found he was out of order.

The county board heard nearly two hours of public comment on the resolution at the start of the meeting on Tuesday.

The meeting came the day after a man opened fire at a 4th of July parade in Highland Park, Illinois, killing seven people and injuring dozens of others. The City of Kenosha also experienced a shooting on Independence Day that left four people injured and one dead, according to the Kenosha News.

Supervisor Terry Rose was one of the board members opposed to the resolution. During the meeting, Rose commented on what he described as the poor timing of the vote.

"We didn't expect to have a shooting in Highland Park yesterday or shooting here in Kenosha on the Fourth of July. But it does demonstrate to you that guns are a problem in the community. And I don't think that we’d contribute to the security of this county by allowing guns in county buildings," Rose said during discussion of the resolution.

Rose said many county employees voiced opposition to the change and did not feel safe allowing people to bring firearms to their workplace.

"I think we want to create a place here to work where people can come with a good feeling, a feeling of safety, of security, that they are contributing to their life and the life of the community as well," he said during the meeting. "The fact that they are fearful of people coming with guns does not enhance their security on the job."

Supervisor Zach Rodriguez argued during the discussion that people with concealed carry permits are already allowed to carry their firearms in public places like grocery stores and local businesses, but they don’t get to exercise the same rights on county properties.

"You don't get to protect yourself at a moment's notice. You don't know when they happen, you don't want these situations to happen," Rodriguez said during the meeting.

He said concealed carry permit holders have already demonstrated to the state that they are responsible gun owners.

The county board also voted 15-6 to declare Kenosha County a Second Amendment sanctuary. The resolution said the board opposes any legislation that would "infringe upon the Right of the People to keep and bear arms" and would consider those laws "unconstitutional and beyond lawful legislative authority."

Supervisor Daniel Gaschke argued against the resolution during the meeting, calling it bad policy to propose that the county board has the power to decide what laws follow the Constitution.

But supporters of the measure said the resolution simply reinforces the oath that county board members took to protect residents' rights.

Florence County was the first county in Wisconsin pass a Second Amendment Sanctuary resolution in 2019. Republicans in the state Legislature passed a similar measure at the state level last year that would have made some federal regulations unenforceable, but Democratic Gov. Tony Evers vetoed the measure.