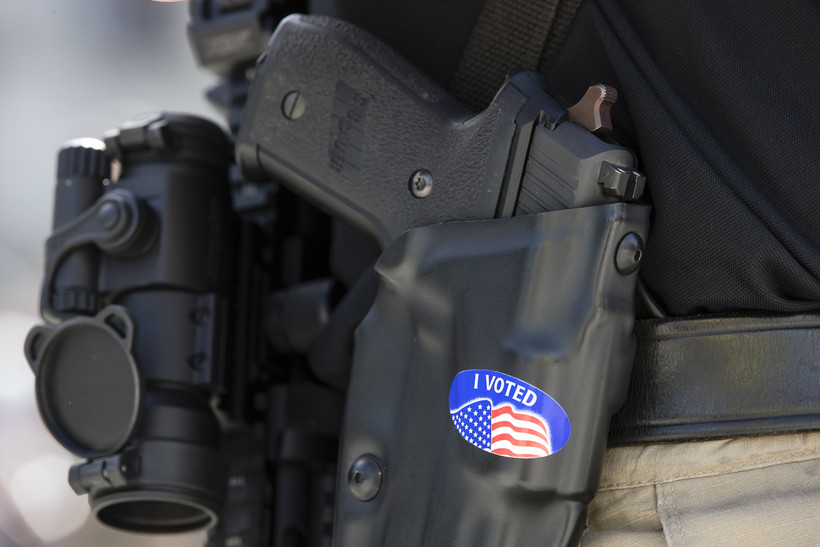 A gun rights advocate with an "I VOTED" sticker on his holster gathers with others for an annual rally on the steps of the state Capitol in Harrisburg, Pa., Monday, May 6, 2019. Matt Rourke/AP Photo

Nonbinding Measure Designed To Send 'Keep Your Hands Off Our Guns' Message To Politicians
By Rich Kremer and The Associated Press
Updated:
Friday, November 15, 2019, 12:00pm
Share:

A county in rural northeastern Wisconsin has declared itself a Second Amendment sanctuary, a move commissioners say is designed to send a "keep your hands off our guns" message to politicians.

On Tuesday, the Florence County Board unanimously approved a resolution that "affirms its support of the Sheriff to exercise sound discretion to not enforce against any citizens an unconstitutional firearms law."

The resolution state’s any state legislation restricting the possession and use of firearms, magazines, ammunition or body armor would be infringing on citizens’ Second Amendment rights. It also cites requirements of firearms owner identification cards or firearms or ammunition taxes as examples of laws that the county Sheriff could choose not to enforce."

Florence County Board chair Jeanette Bomberg told Wisconsin Public Radio the resolution was meant to send a signal that the county and its citizens take their Second Amendment rights very seriously.

"What we’re saying is the Second Amendment allows for law-abiding citizens to be able to protect their homes and bear arms," Bomberg said. "Nothing less, nothing more."

Bomberg said the resolution was in reaction to recent attempts by Gov. Tony Evers and state Democratic lawmakers to call a special session on gun laws. A bill that Evers wanted to be considered would have expanded background checks to private gun sales in Wisconsin, including sales at gun shows. Another bill would have created a "red flag" law that would allow family members or friends to petition a judge to temporarily revoke a person’s right to buy or own firearms if they believe that person could be a threat to themselves or others.

Republicans leaders in the state Assembly and state Senate adjourned the special session without taking any action on the bills.

"It scares people," Bomberg said of the legislation.

She said Wisconsin already has laws on the books that allow for law enforcement to take guns from some people. But Bomberg said attempts to expand scenarios where guns can be confiscated could erode everyone’s Second Amendment rights.

The Florence County resolution is non-binding. When asked who decides which gun laws are or are not constitutional, Bomberg said that’s for judges to decide. She said since board supervisors passed the resolution they’ve gotten calls from other board members in Lincoln, Milwaukee and Brown counties. Bomberg also said they received interest from a local government official in Arkansas.

State Senator Lena Taylor, D-Milwaukee, said allowing a sheriff to decide what gun laws are constitutional could have unintended consequences. As an example, she said a sheriff could interpret a business banning concealed weapons on their property as being an unconstitutional infringement on a person's Second Amendment rights.

Taylor was a lead author of the so called red-flag legislation that would allow judges to order guns to be taken from individuals deemed a risk to themselves or others. In an interview with WPR she said the bill is about protecting people.

"When we consider just what happened in California the other day and vey candidly the threat that happened in my district, in Shorewood, of someone doing a hitlist. This is just extreme risk," said Taylor. "I’m not against anyone having their gun I just want to make sure that people are protected against individuals who are a threat of harm to themselves or others."

Editor's note: This story will be updated. It has been updated to include reporting from Wisconsin Public Radio.

Outbursts and disruptions by the defendant in the Waukesha Christmas Parade tragedy delay jury selection
Mining company moves ahead with plans to drill in northern Wisconsin
Conservative Wisconsin taxpayer group sues over Biden's student loan forgiveness plan
Where does the 'Driftless Area' get its name? The history, boundaries of the southwest Wisconsin region
As Darrell Brooks Jr.'s trial moves forward, experts weigh in on what's happened so far