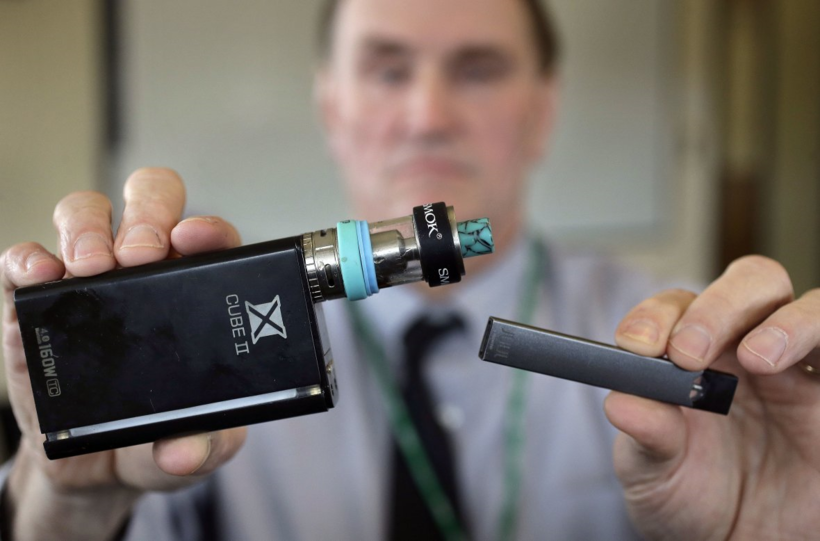 In this Tuesday, April 10, 2018 photo Marshfield High School Principal Robert Keuther displays vaping devices that were confiscated from students in such places as restrooms or hallways at the school in Marshfield, Mass. Steven Senne/AP Photo

The Wisconsin School Administrators Alliance, the Wisconsin Association of School Boards and the Wisconsin Rural Schools Alliance joined together to represent Wisconsin public school leaders in calling on state legislators to act on Senate Bill 364 and Assembly Bill 422.

Senate Bill 364 is authored by Sen. Howard Marklein, R-Spring Green, and Assembly Bill 422 was introduced by Rep. John Spiros, R-Marshfield. The two pieces of legislation are known as Tobacco 21, the companion measures would raise the minimum sales age for tobacco products to 21. The current age in the state is 18. The groups believe the bills would help address the number of teens vaping.

The call to action comes after Wisconsin health officials confirmed 35 cases of severe lung disease tied to vaping in the state. According to the Centers for Disease Control and Prevention, there have been more than 380 cases confirmed throughout the United States. Six people have died from the disease.

John Forester, executive director of the Wisconsin School Administrators Alliance, said school principals and a few superintendents made them aware of the issue of e-cigarettes and other vaping products in Wisconsin middle schools and high schools.

"These products and rising teen nicotine addiction really disrupt the learning day in our schools," Forester said. "We really felt moved to ask our legislators to act on it."

The three organizations said in a joint press release Friday that, "in Wisconsin, one in five high schoolers use e-cigarettes. Additionally, one in nine middle schoolers have tried e-cigarettes," and that, "like raising the legal drinking age from 18 to 21 helped to remove alcohol from high school campuses, we hope this bill will produce similar results when it comes to e-cigarettes and other dangerous products that harm the health of young students and disrupt learning environments in schools."

Dan Rossmiller, government relations director for the Wisconsin Association of School Boards, said his organization has been pushing to get e-cigarettes out of schools for a year.

"Our primary focus is getting this activity and these devices out of our schools," Rossmiller explained. "It's disruptive to the learning environment and harmful to students health."