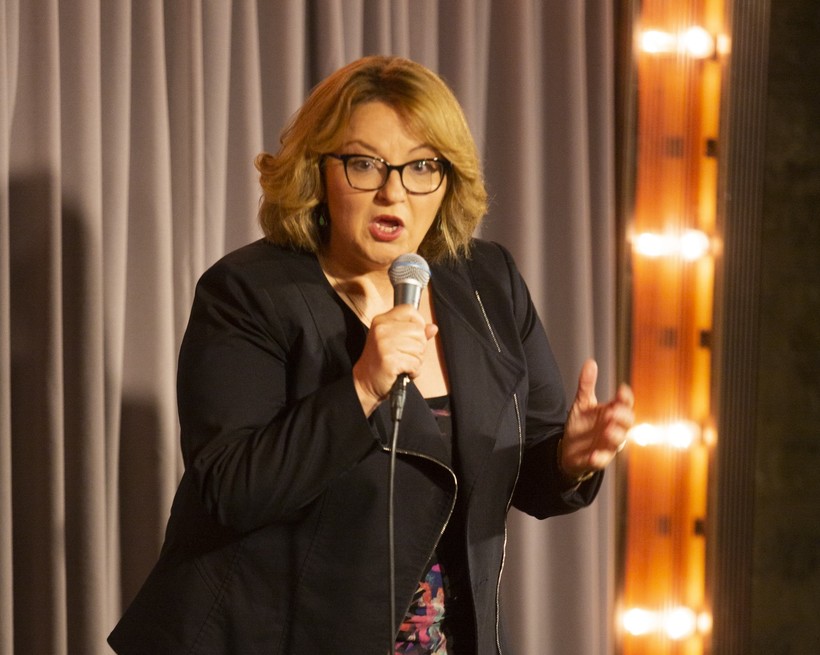 Keeping up with the Kashian: Jackie Kashian is still hilarious after all these years

Comedian Jackie Kashian has been making people laugh for more than 35 years. Her albums have hit No. 1 on Amazon and iTunes and have garnered more than 10 million listens on Spotify and Pandora.

Kashian's latest special and companion album, "Stay-Kashian," has her in fine form, talking about a range of topics including the Rapture, ghosts and her father, Elliot.

Now a resident of Los Angeles, Kashian was born and raised in South Milwaukee and is the youngest of six kids. So it comes as no surprise that she took her own creative approach when it came time to make her stand-up debut — as a heckler.

"It's just an indictment because I went to the University of Wisconsin-Madison in the early '80s, and I had never seen stand-up before and clearly had never been out in public before because during the show, I started heckling the comic," Kashian told WPR's "BETA."

"And there is genuinely nothing worse than a woman heckler, even if you were a woman comic, because for some reason, the audience is always on their side. So everyone was on my side, and I was eventually yelled at by management. And literally the guy said, 'Open mic is on Sundays. You have to shut up.' And I came back three weeks later and did open mic," she said.

The comedian she was heckling was Sam Kinison, a Grammy-nominated comic who appeared on "Late Night with David Letterman" and "Saturday Night Live."

Even though this happened 37 years ago, Kashian still remembers what she heckled Kinison about.

"It was just as lame as everyone's heckling," she recalled. "He had said that he was from Peoria, Illinois, and his timing was slightly off. And I was monumentally inebriated. And during that pause, I yelled, 'I'm sorry.' And then that got a pretty big laugh just because my timing was better than his that very evening."

"And then he tried to essentially mop up the floor with me, and then it didn't work because I wouldn't shut up anyway," she continued. "And so he just kept yelling at me and I just kept talking back. And so management had to approach me like three times."

With experience as a professional heckler, that must give Kashian an advantage when it comes to shutting up hecklers, right?

"No. No, it sadly does not," she said. "It gives me no advantage. And I've been doing standup since 1984, right? And I'm still slightly self-conscious when there is a heckler where I'm just like, 'Oh, well, this poor bastard doesn't know better.' And much like myself when I was a goofy dumb-dumb and just yell and stuff. So I have too much sympathy for them half of the time and too much rage the other half of the time. So I'm not actually very good with hecklers. I'm OK. But my favorite clubs kick them out for me."

Some of the funniest and most intelligent jokes Kashian tells in her special are about her least favorite people — the end times, Rapture people.

As she says in "Stay-Kashian":

And while Kashian has been doing stand-up for more than three decades, her comedic voice has stayed relatively the same.

"It's weird how much it hasn't changed," she said, referring to her style. "There's always a comfort level that changes; I know that I'm going to do well, right? I know that. Even if I have a bad night, it's not going to be a terrible night and I'm going to be able to dig myself out of the hole."

"So the only thing that's really changed in my stand-up is my ability to be aware of what I'm trying to do up there," she added. "It's just the learned skill of stand-up."

"I talk about the same four things every comic talks about, which is sort of sociopolitical things on television, in the news, in interactions with humanity, my family life. ... The same four topics are discussed by absolutely every comic that gets on stage, and you have to make sure that you make it your own."

Kashian's style may be the same, but she says the industry itself has changed over the years.

"When I first started, it was '84. There was this beginning of this observational kind of standup ... sort of a pre-Seinfeld. Leno and Letterman and all those guys with the setup punch," she said.

"In the late '90s, there was this advent of something called alternative comedy, which someone asked me to define at one time in 1999. And I lucked out because my standup has always been an alternative by my definition, because what I think of as alternative comedy is you tell the story of how you came up with the joke and then you tell the punch line" she continued.

When Kashian isn't doing stand-up around the country, chances are she's hosting her two podcasts — "The Dork Forest" and "The Jackie and Laurie Show" which she co-hosts with fellow comedian Laurie Kilmartin — the latter occasionally getting into the culture of harassment and the poor treatment of primarily female comedians.

"BETA" asked Kashian if she thinks things have improved since the #MeToo movement ramped up in 2006.

"There have been great strides made, inequality and injustice and all of these things. But because of those strides, the people who don't want those advances, right? The white supremacists, the misogynists and the people who want to control women and who fear homosexuality or whatever, they have become much more vocal and more in your face," she said. "There used to be a shame factor if you hated people. And now there's a lot less people that hate, but the people who do hate are much more vocal."