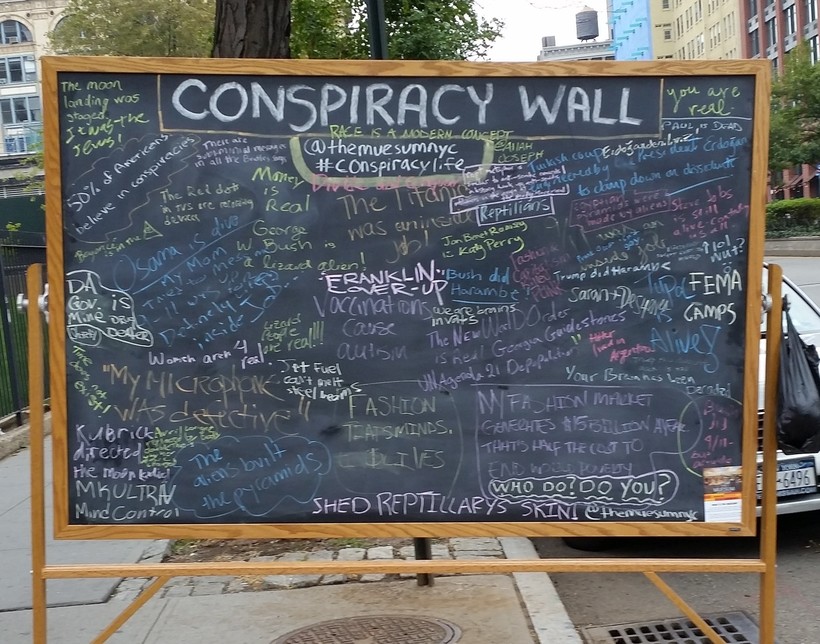 Milton William Cooper's Manifesto Is Among Most-Read Books In US Prisons
By Doug Gordon
Share:

These days, it seems you can't go anywhere to escape conspiracy theories. Log on to any social media platform and the odds are good that you're going to discover someone's tinfoil-hat ideas.

So that got us wondering about the history of conspiracy theories. Which led us to a guy named Milton William Cooper who published a book called "Behold a Pale Horse" in 1991. The book is Cooper's collection of conspiracy theories. It's kind of a handbook in certain circles and is one of the most popular books among prisoners in the United States penitentiary system.

So says Mark Jacobson, the author of "Pale Horse Rider: William Cooper, the Rise of Conspiracy, and the Fall of Trust in America." Jacobson told WPR's "BETA" about the strange bedfellows that make up the book's audience, including rapper Ol' Dirty Bastard of the Wu-Tang Clan.

"The Ol' Dirty Bastard connection is the thing that really is fascinating," Jacobson said. "Because that book, 'Behold a Pale Horse' became in the middle 1990s, and still is to this day, one of the most-read books in the prison system of America, especially on the East Coast."

"The most important thing that I've heard was told to me by Ol' Dirty Bastard himself. I went and interviewed him. It was like shortly before his death. He said, 'Oh yeah. Bill Cooper, Bill Cooper. Yeah, I remember Bill Cooper. You know what Bill Cooper does? In this world, everybody's out to screw you, you know. And Bill Cooper, he tells you who's doing it. And when you're somebody like me, that’s very valuable information.' So that kind of summed it up for me," he continued.

Cooper even predicted school shootings in his manifesto, eight years before the Columbine High School massacre in 1999.

"It was actually kind of smart the way he put it," Jacobson said. "He said the excessive prescription of drugs like Ritalin and Adderall and stuff like that to progressively younger and younger children is going to produce these school shootings.”

Jacobson said that Cooper doesn't just spread unfounded myths. "That's the thing about Bill Cooper. He's half a prophet and he's half a huckster. He's half this kind of apocalyptic belief system about what's going to happen in the near future and P.T. Barnum. I call him the 'P.T. Barnum of Dread.' He's so articulate about this and he's so kind of knowing about it.

"That's the difference between him and somebody like Alex Jones. Alex Jones, you know, he's got a gimmick and he's pushing it," he said. "Bill Cooper is, for all the fibs and all kinds of stuff he told about his personal life and stuff like that, he was an honest guy. He basically told you what he thought. He would occasionally push certain things if he knew that they were popular because he’s trying to make a living on this radio show."

Jacobson said Cooper was steadfast in his determination to figure things out he didn't understand. He tied it to Cooper's famous comment: "Do your own research, read everything, believe nothing until you can prove it with your own research."

In his book, Jacobson writes that Cooper believed that Stanley Kubrick's 1968 film, "2001: A Space Odyssey," was the "key to everything that ever happened in the history of man."

"He thought about it and came up with what I think is maybe his most kind of fascinating theory about things. He said that the beginning sequence of '2001' with the monkeys or the neo-men or whatever they are, and the monolith is really a metaphor for the Garden of Eden story. Because in the Garden of Eden, what God tells Adam and Eve is you must not eat from the tree of the knowledge of good and evil. So when the monolith comes down and is sitting there, they’re (the monkeys) looking around trying to figure out what it is. And then one of them, he touches it," he said.

"Whatever it is that creates consciousness in human beings, it clicks over at that moment ... And then, of course, in Cooper’s version, the first thing he does is kill one of his fellow species members. That is the kind of beginning of mankind on a downward track because he’s always seeing things in terms of good and evil."

Cooper also hosted a radio show which he broadcast from 1992 until November 2001. It was called "The Hour of the Time" and it has what Jacobson describes as is "one of the most arresting sign-ons in radio history."

"It says, 'Lights out, lights out for the curfew of your body, soul and mind.' And then you hear this screaming and yelling and it's like the time has come ... you're supposed to be prepared to understand what's about to happen. That's what Bill Cooper wants to tell you. And if you're not listening to him, you know, he feels like 'Well, just screw you. You know, I'm telling you what you need to know. And if you don’t bother to listen to me, it’s your own fault,'" Jacobson said.

Cooper predicted the Sept. 11, 2001, terrorist attacks. It was just a few months later that Cooper was killed — a coincident Jacobson said can't be ignored.

The Apache County sheriff's deputies attempted to arrest Cooper at his home in Eager, Arizona on Nov. 5, 2001. He was facing charges of aggravated assault with a deadly weapon as well as endangerment resulting from disputes with local residents. Cooper shot one of the deputies in the head before being fatally shot and killed by the other deputy.

"So that's what happened to Bill Cooper. The thing about it was after he had been saying, ‘You'll see, they're going to come up here and shoot me dead on my front doorstep at midnight.' He'd been saying that many times. So they did come up there and they shot him dead on his front doorstep and it was like 10 minutes after 12. So he missed by 10 minutes."

So what does Jacobson think Cooper would think of the current political situation in the U.S. if he were still alive?

"I think that Cooper would be just appalled by what’s happened," Jacobson said. "He's a constitutionalist. He's a believer in the (U.S.) Supreme Court as one of these things that you kind of have to have faith in and it's got to represent everybody and it's not supposed to be political. If Bill Cooper was still alive, at least off everything I've heard from him, I think he would feel that this was a kind of logical progression of what he considered to be the secret hand of evil that was moving along to put these people who really didn’t deserve it into power and they would kind of roll the ball further down the road toward fascism."