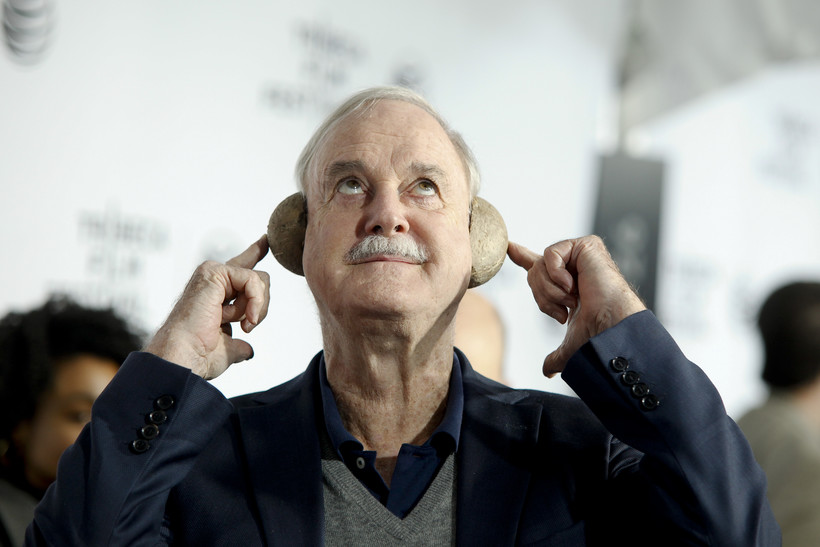 John Cleese Tells Us How We Can Be More Creative

Who would be better than John Cleese to help us learn to be more creative?

No, we couldn't think of anyone either. The writer, actor and comedian has been using his fertile imagination to make us laugh for more than 50 years through his work as a co-founder of the silly and surreal comedy troupe Monty Python, and as the writer and star behind the hilarious BBC sitcom "Fawlty Towers" and movies like "A Fish Called Wanda" and "Fierce Creatures."

Cleese defines creativity as "the ability to come up with a better way to do anything."

"You could be more creative with your flower-arranging — you start thinking, well, why do I always use the same colors? It doesn't matter what you're doing, you can get better at it if you have good ideas. And that means just learning how to be creative," Cleese told WPR's "BETA."

Cleese said that for him, creativity had been "bubbling up" inside of him for a long time.

While attending the University of Cambridge, he joined the Cambridge University Footlights Drama Club, an amateur theatrical society run by students. It was while writing sketches for the "Footlights"club that he realized he had the ability to be creative.

"I discovered to my surprise in 1962 that I could write humorous stuff that would make people laugh. I'd never thought of myself as being creative," he said.

When describing how he thinks about creativity, Cleese highlighted the work of psychologist Donald W. MacKinnon, who discovered that "play" is an important part of being creative. Cleese also read the Dutch historian Johan Huizinga's 1938 book, "Homo Ludens," in which Huizinga argued that play has to be separate from ordinary life.

"So you have to recreate circumstances like when you were a kid," Cleese explained. "That is to say, you have to get yourself in a space where you won't be interrupted and where you can get away from all sorts of pressures, especially time pressures. And where you can sit for at least an hour because the first 15 minutes, all you can do is think of all the things you ought to be doing. Like meditation, ever so slowly, the mind settles and you can start having new ideas which at a later stage, a much later stage, of course, you have to evaluate with the critical mind."

About 20 years ago, Cleese also read a book called "Hare Brain, Tortoise Mind: How Intelligence Increases When You Think Less" by the cognitive scientist Guy Claxton. This book taught Cleese that some things, like being creative, need to be done at their own pace, he said.

"He quoted this hilarious Polish proverb, which is, 'Sleep faster, we need the pillows.' I think that's enormously funny. You can't sleep faster," Cleese said.

"We've got to realize that our culture absolutely worships clarity. And that if you try to be creative, by definition, you're going somewhere you haven't been before. So how can you be very clear about where you are or where you're going if you've never been there before? Nothing is familiar, you're in new territory, so you just have to say, 'Well, I don't really know what's going on. I'm just handing it over to my own unconscious and not trying to clarify it too soon,'" he said.

Cleese discovered the power of the unconscious in creativity while working on a sketch with fellow Monty Python member Graham Chapman. It was a parody of a Church of England sermon. Cleese lost the initial script. After looking all over for it and not being able to find it, Cleese rewrote the entire sketch from memory.

"And when I'd done that, I discovered the original and I compared them," Cleese recalled. "And the second one was surprisingly better than the first. It was crisper and funnier. And, you know, brevity's the soul of wit. And it was just a little bit more brief and a little bit more punchy. And I thought, well, I wasn't trying to improve it. I was just trying to remember it."

"It was much more about just being silly," Cleese said. "We would sometimes become a little bit too logical. Chapman would sit there puffing on his pipe, staring out the window and suddenly say something wonderfully mad, which would get us out of the rut that I was getting us stuck in. I was pushing the thing forward and Graham was sitting there puffing away.

"He was never a hundred percent present. Michael Palin send a wonderful thing at his funeral and talked about him always being late. He said at the memorial service that 'I like to feel that Graham is with us here at this moment.' And then he paused and said, 'Or at least he will be in another 45 minutes.'"

When Cleese collaborated with Connie Booth on their hilarious BBC sitcom, "Fawlty Towers," during the 1970s, Cleese learned that they both had different strengths as creators.

"I was better on plot and she was better on character. She's a wonderful actress. And because she was such a good actress, she would certainly say when I'd written something, she said, 'No, I wouldn't believe that. I don't think the person would say that.' And then I'd say, 'Oh, yeah, you're right.' And then we’d go back and slightly tweak the plot so that we made the emotions work. So I looked after the plot and the emotions."

Cleese has one piece of advice to offer for those of us who would like to be more creative, drawing on the ideas of "play" he described learning from Huizinga:

"You have to create the conditions for play. And that means you have to find the space in your life, which is quite separate from your ordinary life. So you need a place where you're not going to be interrupted. And then you just need to give yourself a very specific moment when you start and when you finish."