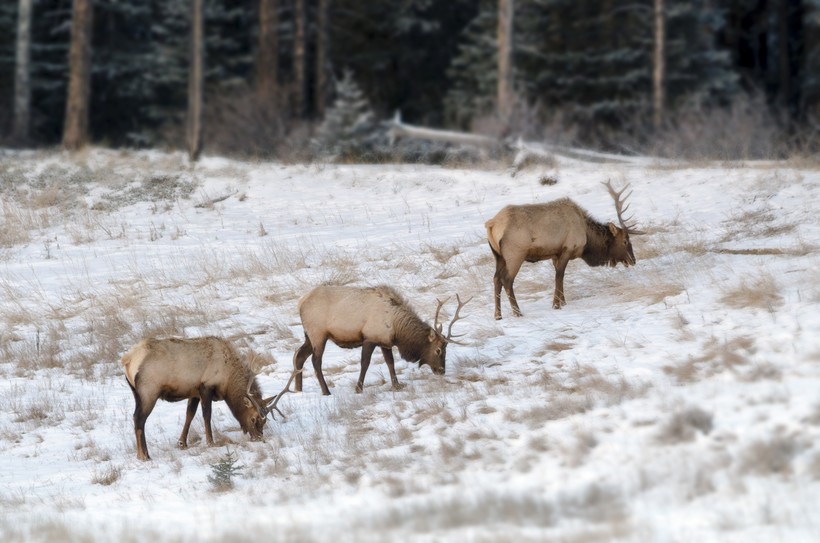 'The Only Good Indians' Explores Revenge, Cultural Identity And Breaking From Tradition
By Doug Gordon
Share:

"I guess it could. But I'm happy being the Jordan Peele," Jones told WPR's "BETA."

And why does Jones think he's been called "the Jordan Peele of horror literature"?

"I think it's because I know horror really well. I do horror," he said. "But also I bring who I am into the story, onto the page. And I'm not quite happy with the way things are as regards the treatment of representation of American Indians. And so I'm always coming at that, as well as my characters are coming at a monster or a monster is coming at them."

Jones' latest novel is called "The Only Good Indians." It's about four American Indian men on the Blackfeet Reservation in Montana. They are out hunting elk the day before Thanksgiving, and they do something they shouldn't have done. Ten years later, they learn that they're now the ones being hunted by something from that day.

Jones explained why he chose the elk as the animal that haunts the memories of these young men.

"I guess the first reason is because their atrocity, their crime, the trespass they committed wasn't against a single animal, it was against a herd of animals," he said. "And you don't very often in November come upon a whole herd of deer or white-tailed or mule deer. You will find elk bunched up together like that. So part of it's just mechanical or logistical. But, you know, the real reason is probably just that since I was 12, I've been hunting elk. And when we go out for elk, we usually have mule deer and whitetail tags, too. But elk is the GOAT (Greatest Of All Time) and elk are super sneaky, super smart, super fast, super tough. When you get an elk, it's only after a lot of hard work. And that to me makes them kind of special."

The novel's four main characters are Ricky, Lewis, Gabriel and Cassidy. They have an inside joke about which of their actions are the kind worthy of a good Indian, which raises the question: What makes a good Indian?

What does Jones think the answer is?

"I wanted to everybody in this novel to be asking themselves that," Jones replied. "What does it mean to be a good Indian in today's world, because America wants us to be in a John Wayne movie, basically. They want us wearing headbands and loincloths and falling dead off the back of horses. That's not necessarily what we want, of course.

"We're always struggling between the representation that's forced on us and who we want to be. And there are also situations where success in one culture is betrayal in another culture. And there's all kinds of dynamics like that which can grind a person up. So where I wanted to land with this question — what makes a good Indian — is that there's not a single way to be a good Indian. There are 7 million different ways. And the reason there are so many different ways is because there are 7 million of us and growing."

Jones says that the biggest challenge he faced while writing "The Only Good Indians" was switching points of view from one character to another and into the spirit of vengeance. He compares the point-of-view of the vengeful spirit to the killers in slasher movies such as the "Friday the 13th" franchise, the "Halloween" movies and the "Nightmare on Elm Street" movies.

"When you watch a slasher movie and when you go to see Jason (Voorhees) or Michael (Myers) or Freddy at the movie theater or streaming or whatever, there's always that moment where you're looking through the eye holes and the characters' masks or you're parting the bushes to look at the party going on. I always call that slasher cam. It's where we kind of understand that this breathing presence is stalking someone," Jones said. "It's a scary thing."

"Of course, it does a good thing to up the tension in the story. However, on the page in fiction, it's really tricky to do that because we're taught that each section gets its own point of view. You can't mix them. And so to jump heads, you have to do a different section or chapter break. But to do that announces what you're doing and the point of view can no longer scare the character. And so I had to drop into what feels like second person from third person, which was a trick. And finally, instead of asking for permission or precedents to do it, I just figured I'm just going to do it, make it work."

The Tuscarora writer Alicia Elliott has written about the rise of a genre called "Indigenous horror" in which she argues that Indigenous writers combine the mundane horror of living in a country that dehumanizes them with fiction that’s designed to scare readers and audiences. Does Jones think his work fits into this genre?

"I think it definitely does. All Indians who are doing art are doing art in the post-apocalypse where we're definitely trying to fight for number one — just existence — because so many people don't understand that American Indians still exist," he said. "They think that we went away with the covered wagons or whatever. So that's the first battle. And the second battle is — it's not for fair or charitable representation, I don't think. I think that's a distraction. I think it's for treaty rights, for legal stuff, you know, I think sovereignty. That's the stuff that we always need to be angling for and looking towards."