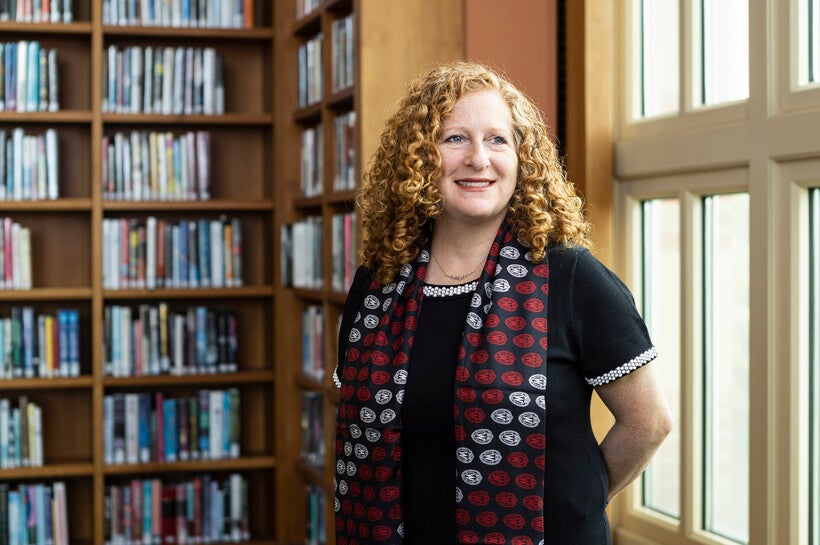 On her first day as chancellor of the University of Wisconsin-Madison, Jennifer Mnookin said she is working to build a "bold vision" for the state's flagship campus by connecting with stakeholders, including state lawmakers who opposed her chancellorship.

Mnookin, the former dean of the UCLA School of Law, officially took over the leadership post in Madison on Thursday. She told Wisconsin Public Radio that when it comes to laying out the path for the state's largest college, she plans to work closely with shared governance groups representing students, staff and faculty. She said representatives from all shared governance groups will join her for a gathering Thursday night at UW-Madison's chancellor's residence, the Olin House.

But Mnookin said she's also been meeting with off-campus stakeholders from the business community along with Republican and Democratic members of the State Legislature.

"And so my strong hope is that after that, we will be able to collectively build a vision, I hope, a bold vision for what comes next for the university," Mnookin said. "But I'm not walking in with all of the ideas on day one. I think that would be a real mistake."

I’m honored to be here, @UWMadison in #Wisconsin, on ancestral Ho-Chunk land, on my first day as your new Chancellor.

I’m eager to begin my service to this campus and the people of this state. pic.twitter.com/zlCzTwYv0W

Almost immediately after the UW System Board of Regents announced in May that they had chosen Mnookin to lead the Madison campus, Republicans like Assembly Speaker Robin Vos, R-Rochester, State Sen. Steve Nass, R-Whitewater, and Republican candidate for governor Rebecca Kleefisch blasted the pick. They released statements calling Mnookin a "blatant partisan selection" and a "woke radical." Nass went as far as saying taxpayer money for UW-Madison should be withheld if Mnookin was hired.

In response, Mnookin said her experience as a lawyer prepared her to "talk across difference" and seek common ground.

"We are at a polarized moment for our nation," Mnookin said. "And Wisconsin is certainly no exception. But the idea of educating people to be able to make contributions and live lives of purpose and meaning and giving back doesn't need to be a polarized or partisan issue."

One area where Republicans and conservative groups have focused their criticism on UW-Madison, and public education in general, is an academic concept known as Critical Race Theory. In short, CRT aims to highlight how racism is embedded in society, laws and other government policies.

But Republicans have accused universities and public K12 schools of "indoctrinating" students on issues of race, sex and gender. Republican lawmakers introduced legislation last year that would have limited the teaching of anti-racist and anti-sexist lessons.

The conservative Wisconsin Institute for Law and Liberty issued a report in July highlighting UW System course offerings it claims "are presented from only one political perspective."

Mnookin said it's important for universities to care deeply about every student's sense of belonging.

"And it's true that for vulnerable or marginalized or minoritized populations, that can be harder," Mnookin said.

But she said when she thinks about diversity it goes beyond racial and gender diversity and LGBTQ issues.

"I also think about rural-urban, I think about first generation (students). And I also think about diversity of thought," Mnookin said. "And it's important that people with different kinds of ideas and perspectives all feel that the campus is a place for them and a place that they can belong."

When asked about challenges facing UW-Madison, Mnookin pointed to affordability. She noted around 60 percent of students graduate without debt but said she would like to see that number higher yet.

Tuition rates for in-state, undergraduate students at the UW System's 13 universities were frozen by state lawmakers in 2013. That freeze continued until the Legislature gave the authority to raise tuition back to the Board of Regents in the 2021-2023 state budget. Still, UW System President Jay Rothman chose not to increase in-state tuition for undergraduates in his 2022-2023 budget.

"From an affordability perspective, that's obviously a really valuable thing," Mnookin said. "At the same time, especially in a highly inflationary environment, eventually that will have effects on quality."

Mnookin said UW-Madison has done well raising private donations and attracting federal research grants, but those funds don't tend to focus on "keeping the lights on, core infrastructure needs, that sort of thing."

"And so state funding and tuition are really important sources for those needs for universities like us and for us in particular," said Mnookin.

The chancellor did not say whether she felt in-state, undergraduate tuition at UW-Madison should be increased.

Mnookin's term as chancellor follows the departure of former Chancellor Rebecca Blank in May, who left to become the 17th president of the private Northwestern University in Evanston, Illinois. Blank stepped down from that position in July after being diagnosed with an aggressive form of cancer.

Editor's note: This story has been updated to reflect that Chancellor Rebecca Blank is one of the first women to be granted tenure in Northwestern's economics department. Wisconsin Public Radio is a service of the University of Wisconsin-Madison and the Wisconsin Educational Communications Board.