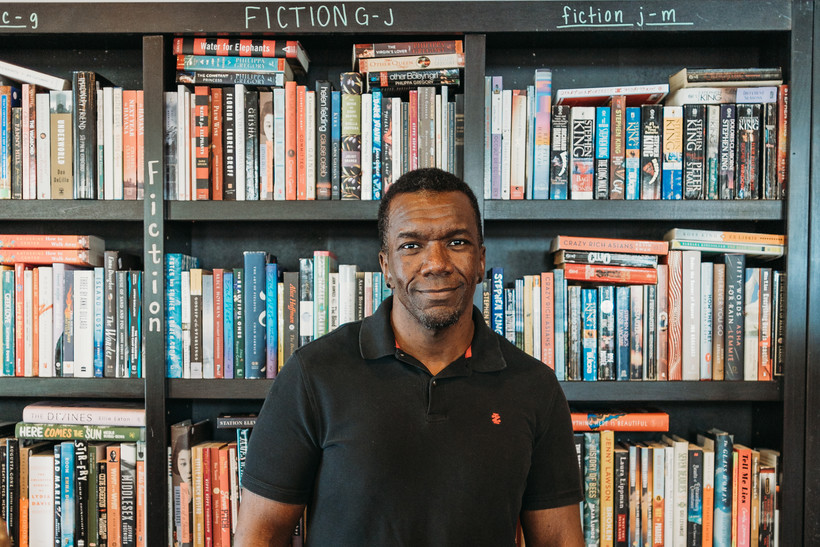 Jason Mott on his National Book Award-winning novel, 'Hell of a Book'

The book gave Mott the opportunity to play with language in a new kind of way
By Doug Gordon
Share:

Jason Mott won the National Book Award in fiction for his novel, "Hell of a Book," in November.

The novel — his fourth — follows an unnamed Black author who goes on a publicity tour across the country to promote his best-selling novel. The book also tells the story of a young Black boy named Soot who lives in a rural town in the not-too-distant past and a character known as The Kid, who might be imaginary.

In his online acceptance speech, Mott dedicated the award "to all the other mad kids, to all the outsiders, the weirdos, the bullied. The ones so strange they had no choice but to be misunderstood by the world and by those around them. The ones who, in spite of this, refuse to outgrow their imagination, refuse to abandon their dreams and refuse to deny, diminish their identity, or their truth, or their loves, unlike so many others."

Mott told Wisconsin Public Radio's "BETA" he enjoys stories that break out of the confines of traditional storytelling.

"Don't get me wrong. I really enjoy a very normal, straight A to B to C kind of storytelling," he said. "But the ones that always come back to me in my memory are the ones that do things very differently and have these kind of creative flourishes. When I was younger in undergrad writing fiction, I did a lot of really unique, creative, strange stories, and (I) kind of got away from that, and I wanted to go back to that."

Fortunately, for Mott, he was not under a book contract at the time wrote "Hell of a Book," so no one had any great expectations for this novel.

"This novel was just me and the page having fun," Mott said.

Mott has said "Hell of a Book" gave him the opportunity to play with language in a way that he hadn't been able to before. This freedom was a result of not being beholden to a book contract.

"It was a novel that I wrote for myself and the flourishes and the fun and the silliness, and then also the heaviness and the exactitude of the language and using film noir as a mechanic to tell the story about Black America," he said. "It finally was just a place where I didn't care about how the book was going to be reviewed by other people or the people I admire. It was just the book that I wanted to admire for my own reasons, and that helped me write it in the way that I wanted to write it."

Charles Yu, who won the 2020 National Book Award for his novel, "Interior Chinatown," was one of the judges for the 2021 National Book Award. His comments on Mott's work: "'Hell of a Book' more than lives up to its title. Playful, searching, raw, and necessary, this writing, this novel twisted me up and turned me inside out, dazzled me, surprised me, and moved me."

Besides the Black author who serves as the narrator, there are also two other very important characters — Soot and The Kid.

Mott came up with the Soot character when he was just writing about his thoughts and emotions about being Black and some of his memories about growing up.

"And it was just this hodgepodge of things — some of them real, some of them imagined," he said. "The Kid just kind of appeared one day, almost as he does in the novel."

Mott was revising the scenes with the author because he'd written those scenes already. As he was making some revisions, The Kid suddenly appeared and started talking to the author.

One of the most powerful storylines in "Hell of a Book" is the tragic police shooting of a young Black boy. The shooting airs repeatedly on the news, so it's a recurring motif. Mott said these were some of the most difficult scenes to write.

"Almost every day, there was a report of a new shooting. I set up a Google Alerts at one point to try to keep track of things, and it started flooding my email box," Mott explained. "And so I wanted to mirror that. Writing those scenes was very difficult because it was forcing me to really face how often this thing happens and the feeling that I kind of have when you hear about these shootings. And they just don't go away, and you try to ignore them because you become overwhelmed."

The narrator is an avid fan of film noir and often speaks in a hard-boiled noir style. Mott admits that he does see a connection between film noir and what it means to be Black in America. He said film noir is detached from reality, and it is a space where language functions in a very specific and unique way.

Mott also points out that when film noir was at its peak popularity, Black people in the United States didn't have opportunity to be in those films or have their narratives shared through that genre.

"So I think that's where there's a bit of dissonance and disconnect that I would love to see, which is what actually made the novel fun and interesting for me because it was kind of like the novel was trying to send this message that people don't think of Black people as connecting with things like film noir or all these genres that we think of as very much Americana," Mott said. "We don't often times think of minorities and like Black kids somehow connecting with them. And they are and they do."