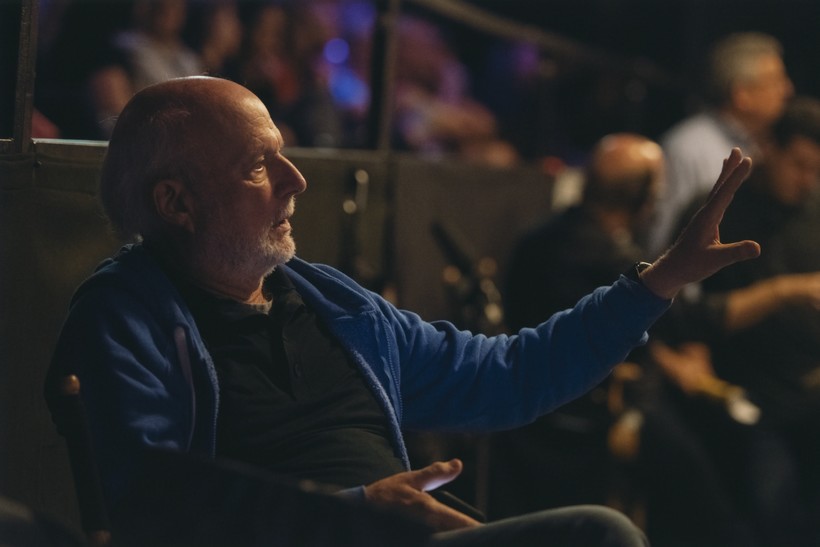 James Burrows is a man of many nicknames: the sitcom sorcerer; the Steven Spielberg of sitcoms; and the Concorde of TV pilots, which would make him the James Burrows of Supersonic Airliners.

Burrows has been making America laugh for half a century with his masterful direction of situation comedies that we're sure you’re familiar with: "The Mary Tyler Moore Show;" "Taxi," "Cheers," "Frasier," "Friends" and "Will & Grace."

His memoir is called "Directed by James Burrows." He shared the secrets of his success with Wisconsin Public Radio's "BETA."

He also eloquently expressed appreciation for the man who helped launch his incredible career: his father, Abe Burrows, was a well-known humorist, writer and director of radio and stage plays.

"I didn't know how big an influence he was on me because he was just my dad, and he would trundle my sister and I off to rehearsals, and we would kind of run around the back of the theater, didn't know what was going on," he recalled. "And I like to say he taught me when I didn't know I was learning. And I ended up at the Yale School of Drama. And once I went there as a student, you have to take courses in directing, acting, writing, stage managing, scene design. I began, as I took these courses, to realize how much I had learned, just kind of watching my dad. And so after I graduated, I started as a stage manager in the theater."

Burrows said his father was a kind man who knew what he wanted.

"And he got it through kindness," Burrows said. "He would not say, 'No, you have to do it this way.' If an actor had a discussion, he would experiment with that suggestion or they'd come up with another suggestion. He always made it feel like it was a group decision of what was funniest at that moment in the play so that the actor felt involved in it."

"That's how I've worked, because actors are so valuable to what I do. So what I do is I try to create and empower the actor to contribute," Burrows said. "If the writer's work doesn't work at a certain moment, maybe we can find something that will make it work. So that was all from my dad. My dad was a playwright director. So as he was directing, he would rewrite."

Burrows said working on the sitcom, "Taxi," was the toughest job he ever had.

"It was my first resident directorship," he said. "I was hired to do all the shows. It was this incredible group of writers that had come over from MTM ("The Mary Tyler Moore Show") — James Brooks, Ed. Weinberger, Stan Daniels and Dave Davis — and I had a cast that was interplanetary."

Burrows joined forces with writers and producers Glen and Les Charles, producers of "Taxi," to get a development deal with Paramount Pictures to create "Cheers."

Burrows said the biggest challenge he faced during the 11 years he directed "Cheers" was "keeping up the energy in the first year. Because nobody knew us."

"The Charles brothers' writing was extraordinary on that show," Burrows said. "And I knew it because every show we shot in front of this audience who came in, who had never seen the show before, they roared and they were invested in the characters, especially Sam and Diane. Plus, the key thing is NBC has nothing to replace it with."

Burrows said that it was devastating when Shelley Long (who played Diane Chambers) decided she wanted to leave "Cheers" after the fifth season in 1987.

But as Burrows explained, they went back to their original conception of "Cheers" — which had actor Ted Danson, playing Sam Malone, working for a woman. They created the character of Rebecca Howe.

"Our casting director Jeff Greenberg came in and said, 'Kirstie Alley,' and that was it."

Burrows said one of the proudest moments of his career occurred in 2012 when then-vice president Joe Biden said: "I think 'Will & Grace' probably did more to educate the American public than almost anything anybody's ever done so far. People fear that which is different. Now they're beginning to understand."

Burrows directed all 246 episode of "Will & Grace," including the recent reboot.

Burrows points to one episode from the reboot that is especially heartfelt and powerful. It's when Grace finds a box of letters Will wrote to her — and there's one letter that has never been opened.

Burrows on his favorites and his future

Burrows has a couple of favorite scenes from his brilliant career that really make him laugh. One of them is this hilarious scene from "Taxi":

The other is this scene from an episode of "Friends" showcasing the physical comedy skills of David Schwimmer who plays Ross Geller:

"We had a live cat when I shot the scene with Jen (Jennifer Aniston) and David, but when we were inside, we had a fake cat. So that's why Schwimmer is so abusive to that animal."

Is there anything Burrows has not done over the past 50 years that he would still like to do?

"I'd like to find a show again that makes me laugh like 'Will & Grace' did. I couldn't do all of them, but I would do maybe two and then another two and stuff like that, just to keep the ligaments oiled," he said.

Burrows worked with the legendary TV writer/producer Norman Lear on "Live in Front of a Studio Audience." It was a series of live recreations of such groundbreaking Lear sitcoms as "All in the Family," "The Jeffersons" and "Good Times."

"Those we had a great time doing," Burrows said.

"It scared the crap out of me because I have to be in a booth cutting the show live. On all the shows I ever did, I never cut them live. They were always shot on film and delivered to an editor, and then they were edited down."