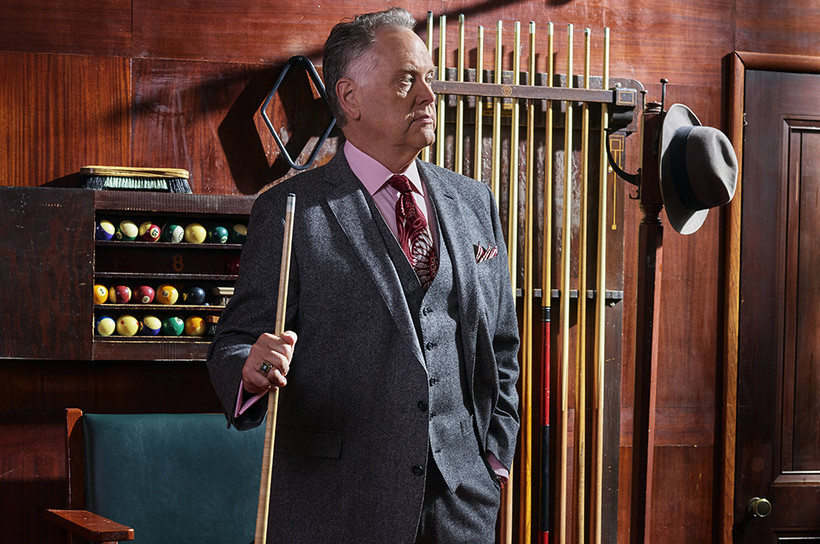 TCM's Eddie Muller On Being 'The Czar Of Noir'

'Noir Alley' Host On His Lifetime Love Of Cinema's Most Enduring Genre
By Adam Friedrich
Share:

The fact that Eddie Muller has become the ambassador of film noir shouldn't surprise anyone. Muller was born in San Francisco — the location city to many seminal noir pictures — to a local sportswriter father, whose past life inspired in Muller a deep passion for history of the noir era.

"I think it all had to do with my father, who was not a movie fan whatsoever, but I was born very late in his life. He was in his prime as a young man during what we now recognize as the original noir era," Muller tells WPR's "BETA." "So because I grew up in the late '60s and early '70s, the world looked entirely different than it did only 20, 25 years earlier."

Then it shouldn't be a surprise either that Muller's first noir picture he can remember seeing and falling in love with is the 1949 Richard Conte film, "Thieves' Highway" which was set in his hometown.

"I like that one to be the first one because it is actually set in San Francisco," Muller said. "It was a world that no longer existed when I saw the film. It was the old produce market down on the Embarcadero in San Francisco, which had long since been raised and condominiums put up. There was this whole other world that existed beneath the world that we live in now."

Film noir carved out its niche as a powerhouse film genre in the post-World War II '40s and '50s. Muller says this came out of a resistance to Hollywood films that always ended happily. He argues that in the wake of the war, many artists and audience members felt those rosy outcomes were more propaganda and not reflective of real life.

"Noir in many ways was a resistance movement by a lot of artists to say, 'Well, life doesn't actually work that way,' and one of the ways they could do this was in genre pictures like crime movies in which they could show average people doing the wrong thing," Muller said.

The compromised protagonist became a standard motif of noir, but these films also shared hard-boiled language, criminal plots and twists, stylistic shadowy cinematography and femme fatales. All of which were packaged perfectly in what Muller considers the essential noir film, 1944's "Double Indemnity" starring Fred MacMurray and Barbara Stanwyck.

"It took two hugely popular stars, I mean, at that point, Barbara Stanwyck was the highest paid woman in the United States of America, and Fred MacMurray was pretty much known just as a comedic, a very light comedic actor. And it made them murderers," Muller said. "People may not understand just how groundbreaking that film was to put two big stars in a movie where they are such wretched characters and to somehow make them charismatic and appealing."

In 1998, Muller released his book, "Dark City: The Lost World of Film Noir," a comprehensive guide to the silver screen characters and artists who were part of the noir era. He would also begin to program film fests of noir films. That was when he caught the eye of film historian and popular Turner Classic Movies (TCM) host, Robert Osborne.

"I was personally invited by Robert Osborne to his own film festival in Athens, Georgia. He used to do this every year, and I was very gratified when Robert invited me to come and co-host some films," Muller said. "I felt like I had gotten a benediction of sorts right off the bat."

A few years later, Muller would program and present a summer series for TCM called, "Summer of Darkness." This would lay the groundwork for what would eventually become "Noir Alley" — TCM's weekly presentation of noir films, hosted by Muller.

The popularity of "Noir Alley" — and perhaps a recent resurgence of the global anxiety that hung over America after WWII — is contributing to a surge in noir fandom and demonstrating its legacy as a genre.

In a new profile for @GQMagazine by @GMPaiella, actor Steve Buscemi reveals one of the things keeping him busy is #NoirAlley on @TCM. https://t.co/0rXShelD3h pic.twitter.com/wZf1A3W6xw

"We now have this network of people all over the world who are looking for noir films and coming to the festivals and it's been amazing," Muller said. "I'm not going to say it's a cult or anything, but it's a wonderful fraternity of people."

"That period in American history was kind of the apex in terms of style," he continued. "It was like everybody dressed so well. The cars were so fantastic. The nightclubs were the best ever. The music was fantastic. And there's a sense of people wanting to retain that spirit through these movies."

Additionally, Muller founded The Film Noir Foundation which is about preservation, restoration and education of noir films. Muller believes film noir can be a gateway into classic cinema for younger generations.

"I love to go into high schools because I'm not only trying to save movies, I'm trying to create a new audience. I'm trying to convince young people that they should watch these movies because there's more going on in them than they might imagine, which is another reason why I say, 'Noir has never lost its bite.'"