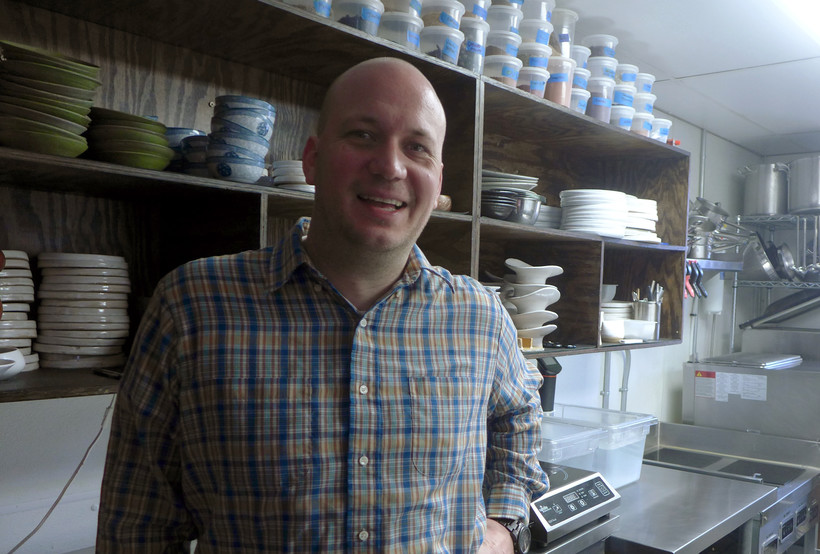 Chef Justin Carlisle in the kitchen of Ardent.

It’s easy to walk right past Ardent without noticing it. The renowned restaurant in Milwaukee’s lower east side doesn't have a flashy sign outside, and it’s in the lower level of a brick building. But inside is the restaurant that has earned chef Justin Carlisle and his team a nomination for a James Beard Award — the equivalent of an Oscar in the culinary world.

On a recent day in the kitchen, the freezers and coolers were loudly humming, and it smelled like Carlisle was baking brownies or bread. He wasn't.

"It’s going to be chicken seasoning in the ramen stock," said Carlisle. "It’s called taré. So what we do is we roast chicken bones, white soy, light soy, and miré and we blend it all up. That’s the salty, kind of umami flavor towards the end of the broth."

A complex broth could be one part of a constantly changing menu, with plates like beef tartare with deviled egg and bone marrow or a "milk" dish, with fresh bread, butter, and Muenster cheese made in-house. Carlisle pulls it off with just six other employees. The restaurant is small, with only 23 seats in the cozy dining room. The kitchen is the centerpiece, so diners can see their eight-course meal being prepared. During meal service, each employee makes one or two dishes, and then lends a hand elsewhere in the restaurant. Carlisle has been working in kitchens since he was 14, when he washed dishes at the Club Oasis supper club in western Wisconsin. Since then, he’s bounced around restaurants in Chicago and Madison, before eventually landing in Milwaukee. When it came time to developing Ardent’s menu, he wanted to get back to his roots.

"I grew up in Sparta, and I guess we were cool before cool was, because we had to live off the farm I grew up on," said Carlisle. "We make our own butter and we culture cream here and we do all these things that — we grew up on the farm and we did this off necessity. It was wonderful and it was delicious and we had all these wonderful meals and fond memories."

Since Carlisle was a child, his family has been raising beef cattle and growing crops. His parents still live in Sparta, but they’re also involved in the restaurant. His father is the restaurant’s beef supplier, and Carlisle’s mom sews all the restaurant’s napkins and aprons.

His partnership with farmers extends beyond his family — many of his other suppliers are local producers as well. Carlisle and his team then take the basic farm ingredients they get from those suppliers and turn them into fine dining, in large part by using the mentality of a farmer.

"It’s going back to whole animal-cutting and whole vegetable-cutting, and using every single scrap that you have and finding necessity as a way to do this, but yet doing it very elegantly and nice," Carlisle said.

Carlisle knows it's an approach that's had more success in places like Chicago, New York, and San Francisco. But he's proving that Milwaukee diners will also pay for that experience.

"There’s also something to say that I can find a space that’s small and acceptable in rent that I can feasibly live and try this and make it work and have, maybe, a larger success rate than I would if I did it in Chicago," he said. "It’s like with Ardent, everybody says, ‘It shouldn’t be in Milwaukee.’ For us, why not? Why shouldn’t it be in Milwaukee? Why, because a restaurant like this is only good in larger cities?"

Carlisle also said he has easy access to what he thinks is some of the best agriculture in the world, grown and raised on Wisconsin’s fields.

"You know, I’m very proud of where I grew up and I’m proud of how I grew up. I’m extremely proud of where Ardent is in Milwaukee and what we do. I think we’re better than everybody else and I want to show that we’re better than everybody else. I want to show that Milwaukee is a city that chefs in my industry can come to and open up a restaurant and do very well," he said.

​Ardent is open Wednesday-Saturday for dinner. According to its website, seating is available every evening from 6 to 6:45 and 8 to 8:45. Reservations are strongly encouraged.

Carlisle said chefs from the coasts don’t "have a clue" about the Midwestern restaurants, so he’s taken it upon himself to become an ambassador of sorts for the local food scene. Once a month, Carlisle flies in chefs from around the world to host collaborative dinners at the restaurant. While they’re in town, he shows off Milwaukee, takes them to friend’s restaurants, and maybe takes them to a farm or two.

"Yes, we’re known for a lot of wonderful things, but not fine dining," he said. "There’s a lot more than beer and encased meats and cheese. By all means, it’s wonderful, I love it. I live by them and eat them every day, but there’s more to our food."

Justin Carlisle and his team will find out Monday if they’ve won the James Beard Award for "Best Chef-Midwest." He’s the only Wisconsin chef left in the running.