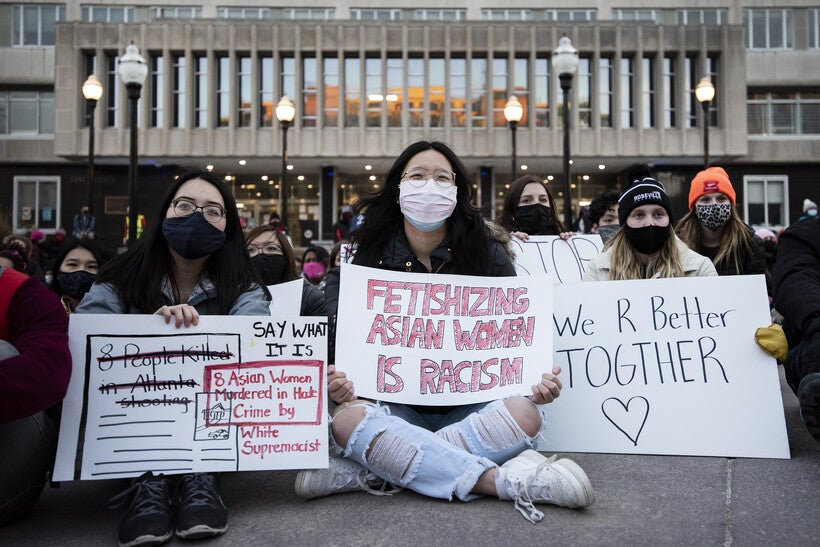 Protesters hold signs as they listen to speakers Thursday, March 18, 2021, during the March for Asian American Lives in Madison, Wis. Angela Major/WPR

'It’s Not Enough To Not Be The Attacker': Asian Americans In Milwaukee Ask For Allyship

Hate Crimes Against Asian People Up Nearly 150 percent In 2020
By Corrinne Hess
Share:

Emily Tau, a young Chinese American professional in Milwaukee, says being biracial, she never felt like she was Asian enough to speak up when friends and acquaintances made racist comments. This included constantly being asked where she was from, if she liked to eat dog, or people saying things like, "Me love you long time."

"I would let it go and laugh it off, but in the past couple years as I have found my voice, I have been standing up and putting a voice to it," Tau said. "This acceptance of these small comments and micro-aggressions are what normalize that overt and violent racism down the line."

Tau was one of five Asian community members featured during a webinar Thursday hosted by FUEL Milwaukee, a networking group for professionals. FUEL hosts a weekly webinar series called "Race Bridge" to help people better understand the nuances of racism.

On March 16, a gunman killed eight people, including six women of Asian descent, in a series of shootings at three spas in the Atlanta metro region. Police have not explained a motive, but the killings come as the Asian American community is battling a surge in hate crimes since the beginning of the coronavirus pandemic.

A recent report by the Center for the Study of Hate and Extremism found hate crimes against Asian people increased nearly 150 percent in 2020.

This week, a video has gone viral showing a 65-year-old Asian American woman being physically and verbally attacked in Manhattan by an unidentified man while a security guard watched. The incident is being investigated as a hate crime.

Alexa Alfaro, co-owner of Meat on the Street in Milwaukee, said she’s not surprised these attacks have happened to Asian Americans because it happens to Black and Hispanic communities as well.

"Asians are no different," Alfaro said. "We’re still people of color. That’s why every single Asian has been asked where are you from. I can’t say Wisconsin — it’s not enough. It’s always, 'No, you don’t look like me.'"

Panelists Thursday said there is an idea of the "model minority," when it comes to Asian Americans. The model minority is a trope that Asians are among the most prosperous, well-educated, and successful ethnic groups in America, and other people of color should look up to them.

This was created by white supremacists to pit minority groups against each other, said Ronald Kuramoto, president of the Japanese American Citizens League of Wisconsin.

Panelist Erik Kennedy said more and more people of all races are sick of seeing people attacked, spit on and condemned because of their race.

"Asians culturally are not usually one to report things," Kennedy said. "We stereotypically just put our heads down and go about life. But more and more people now are reporting because we’re sick of it."

Panelists said the Black Lives Matter rallies across the country and in Wisconsin last summer helped to bridge racial divides between people of color. But, they would like to see more diversity at rallies for Asian people.

Several hundred people gathered in Madison, Milwaukee and the Twin Ports in March, following the Georgia spa killings. Tau said the group in Milwaukee was diverse, but small.

Tau said the image of the woman in Manhattan being attacked and no one helping her keeps playing in her head.

"I think so many people claim they are not racist because they would not attack someone on the street," Tau said. "But it’s not enough to not be the attacker. You need to not be that security guard. If you are closing the door literally or figuratively on anyone who is struggling, that’s not being an ally, and you can’t claim to not be a racist."

Suspect In Custody In Kenosha-Area Bar Shooting That Killed 3
Data Breach Shows Wisconsin Police Officers Donated To Fundraiser For Kenosha Officer Who Shot Jacob Blake
Wood From Forest Products Laboratory In Madison Used For US Capitol Repairs
Proposal To Bottle, Sell Water From Well Near Lake Superior Highlights Fears Over Water Diversions
What You Need To Know About Vaccine Cards