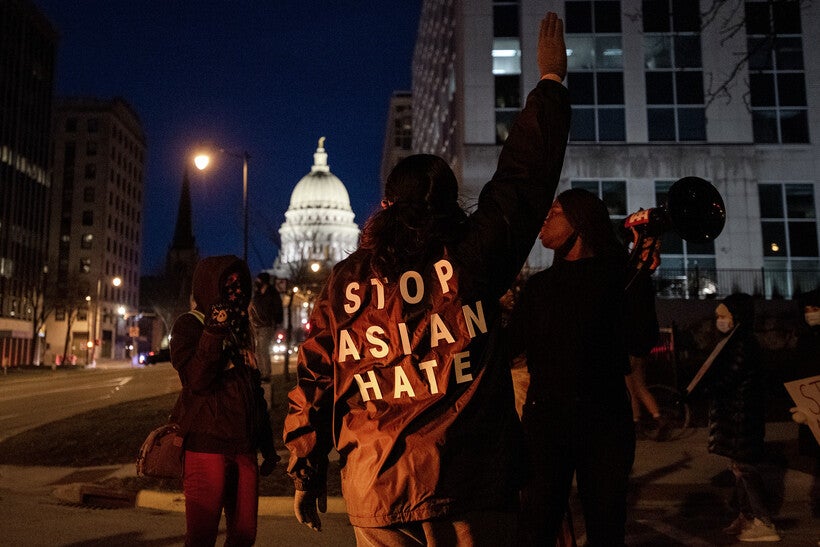 A protest leader holds up her hand to tell the crowd of protesters to pause Thursday, March 18, 2021, in front of the Wisconsin State Capitol in Madison, Wis. Angela Major/WPR

Several hundred people gathered in Madison Thursday evening to march and speak out against anti-Asian violence in the wake of the Georgia spa killings, which left eight people dead, including six women of Asian descent. The group's aim was to show support for Asian people in Wisconsin communities and refute the narrative that the attacks in Georgia were not racially motivated. Similar demonstrations were held in Milwaukee and the Twin Ports.

"Racism is not something new to Asians," said Madison community organizer Brenda Yang. "We have felt its sting since the inception of this country, since the first Asian American immigrant that arrived to the States, and we continue to feel it." 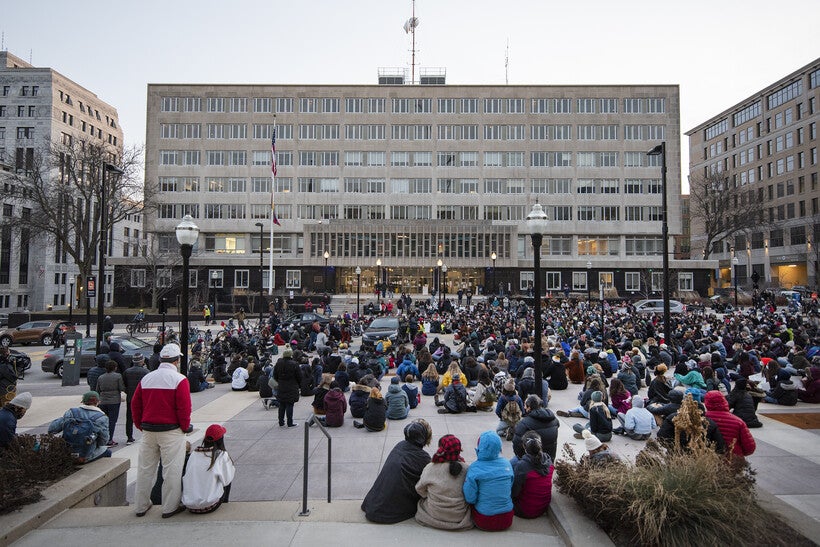 A crowd of protesters listens to speakers during the March for Asian American Lives on Thursday, March 18, 2021, in Madison, Wis. Angela Major/WPR

In a statement condemning the violence Wednesday, Lt. Gov. Mandela Barnes said that xenophobic rhetoric from former President Donald Trump has fueled anti-Asian American sentiments during the pandemic. However, he added that the problem goes much deeper.

"Although we have seen these events increase over the last year, we must recognize that anti-Asian racism is embedded in our nation’s history — from racist immigration laws like the Chinese Exclusion Act to the evils of Japanese internment, to countless other foreign policy decisions that have devastated Asian and Pacific Islander populations around the globe," said Barnes.

The spa killings have filled many Asian Americans with a sense of horror and despair, including Cheong Soon Gan, associate professor of history at the University of Wisconsin-Superior. However, he was not surprised by the senseless act of violence, saying he'd been trying to mentally prepare for such an incident.

He said violence and prejudice against Asian Americans is nothing new and goes all the way back to the marginalization of Chinese workers who helped build the railway lines in the 19th century.

"The most significant example we remember is the incarceration of Japanese and Japanese Americans during World War II," he said in an email Thursday. "Closer to us in time and space is the shooting at the Oak Creek Sikh temple in 2012, in which a gunman shot and killed six worshippers. That was chilling. The coronavirus pandemic and the former president’s rhetoric belittling the Asian American community helped flame the fires that had always existed in the past." 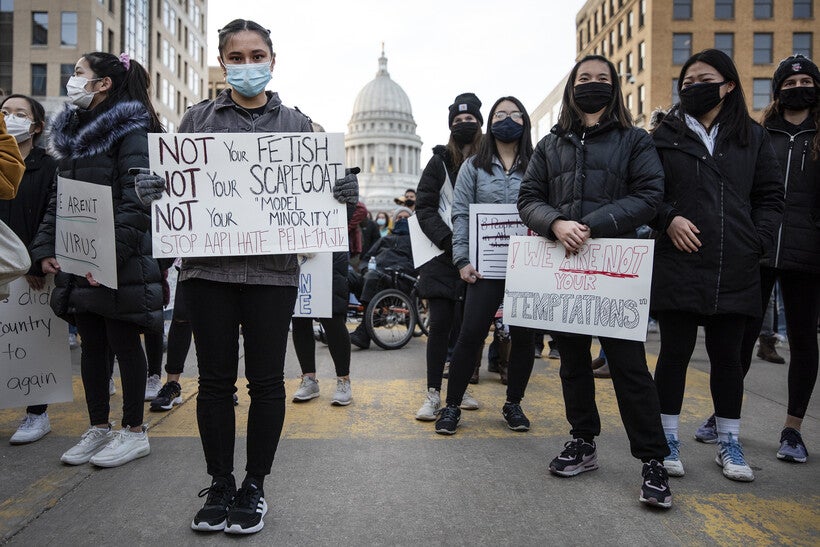 Kate Jasenski of Madison, left, holds a sign while she stands with fellow protesters Thursday, March 18, 2021, during the March for Asian American Lives in Madison, Wis. Angela Major/WPR

College student Kate Jasenski, who is originally from China and was raised in Madison, said she has experienced racism first-hand in Madison. An incident where someone yelled falsehoods about Asians being responsible for the coronavirus at her on the street prompted her to file a complaint with the group Stop AAPI Hate, which catalogs incidents of racism against Asian American Pacific Islander communities. Since the beginning of the pandemic, the group has received reports of over 2,800 firsthand reports of anti-Asian hate across the country.

"I'm Chinese-American, and it's just been so frustrating and heartbreaking watching the news lately," she said. "Every time you turn it on, or even just looking at your phone, it's just a new incident of anti-Asian racism and hatred."

Around 100 residents of the Duluth-Superior community gathered in Duluth on Wednesday at a rally and candlelight vigil against hate organized by Twin Ports Asian American women. Duluth resident Julia Cheng spoke at the event, highlighting the abuse and harassment Asian Americans have encountered during the COVID-19 pandemic. She also recalled deadly shootings by white supremacists in Charleston, Pittsburgh and the Sikh Temple in Oak Creek.

"The common lesson is that we must stand together to resist this kind of hate," said Cheng. "You might not be called upon to take down an active shooter, but you will be called upon to say 'no' to the micro aggression, to the ethnic joke, to the subtle slur and to the casual tossing around of lazy language." 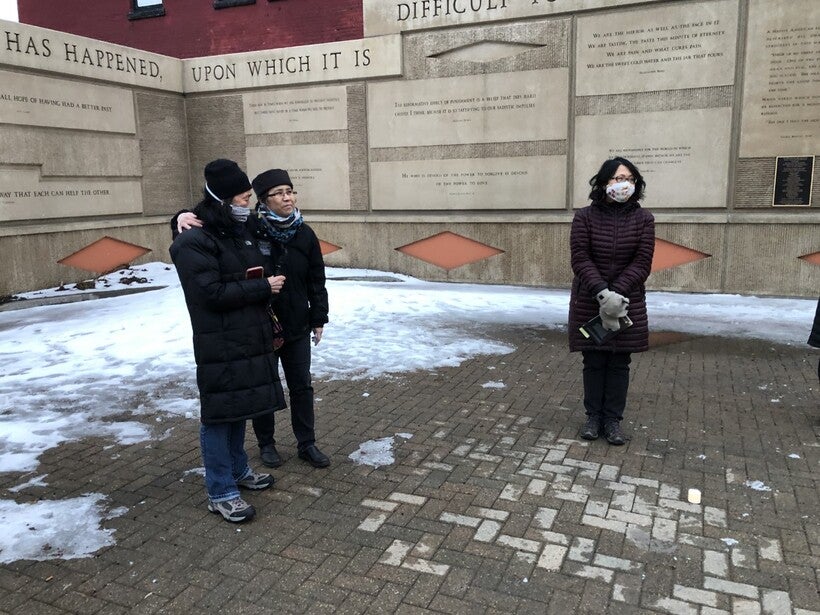 Duluth resident Pakou Ly, one of the event’s organizers, said people are on heightened alert because it feels like violent acts against Asian Americans like the Georgia spa killings are happening so frequently. She said they wanted to seek answers and support in a time of difficulty after being filled with overwhelming sadness and grief for the women who lost their lives.

She said the killings in Georgia are a racist act that reinforces a stereotypical assumption that massage parlors owned or operated by Asians are participating in illegal activities. The suspect Robert Long told police he has a sex addiction and wanted to eliminate the spas as a temptation.

"Now, we've also added that into this and the attention is being drawn away from the real act here, which is murder," said Ly. "I think that giving voice to the voiceless and understanding that silence is no longer an option and that we do need to stand together — that we need to rise up — this is important."

She urged community members to support, listen and learn about Asian Americans to promote healing and prevent further acts of violence.