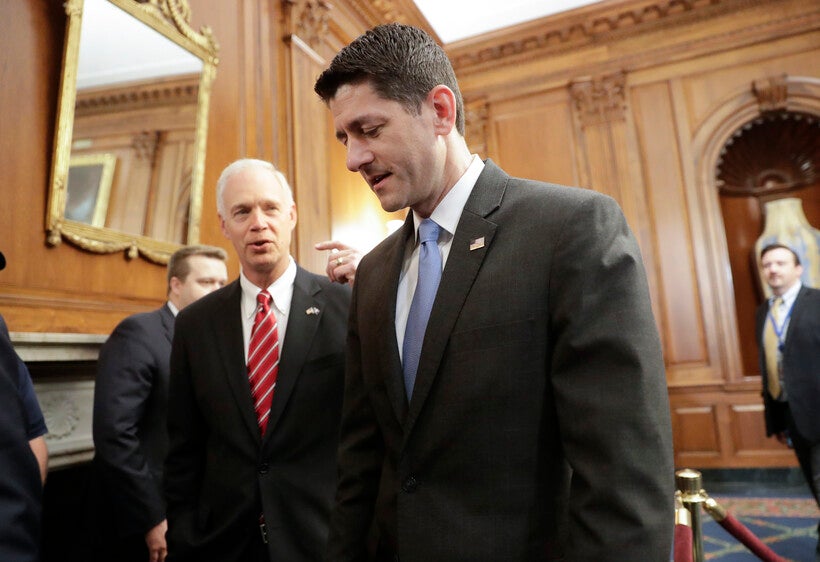 Speaker of the House Paul Ryan, R-Wis., walks with Sen. Ron Johnson, R-Wis., left, after taking questions from reporters about the meetings at the Justice Department planned for today where House and Senate lawmakers from both parties are set to meet with top intelligence officials for classified briefings about the federal investigation into President Donald Trump's 2016 campaign, on Capitol Hill in Washington, Thursday, May 24, 2018. J. Scott Applewhite/AP Photo

'It Was Not Rigged': Ron Johnson, Paul Ryan Push Back On GOP Election Fraud Claims

Two prominent Wisconsin Republicans have pushed back this week on continued claims of widespread voter fraud or wrongdoing during Wisconsin’s 2020 election, even as the state moves forward with additional investigations into how the election was administered.

A recording surfaced Monday on Twitter of U.S. Sen. Ron Johnson saying there is "nothing obviously skewed about the results" of the election. In the recording, which was made without the senator's knowledge, Johnson was speaking with a woman posing as a conservative voter at an event in Wauwatosa.

"The only reason Trump lost Wisconsin is 51,000 Republican voters didn’t vote for him," Johnson said. "If all the Republicans voted for Trump the way they voted for (state) Assembly candidates, he would have won. He didn’t get 51,000 votes other Republicans got — that’s why he lost."

In another recording posted by the same woman, Johnson said he continues to support ongoing audits of the 2020 election, though he disagrees with some fellow Republicans on what the investigations should focus on.

"The last thing I’d really focus on would be the machines, because we have paper ballots," Johnson said.

Johnson said investigators should instead focus on the Wisconsin Elections Commission, ballot collection events like those held in Madison, information added to ballot envelopes by election officials, private grants to help Wisconsin communities with election administration and Milwaukee’s central count voting location, which processed the city’s absentee ballots until the wee hours of the morning following Election Day.

"I really do think there’s too much concentration on the machines," he said.

Johnson’s comments came just days before the Associated Press reported $325,000 of a $676,000 contract for an ongoing election investigation called by the leader of the state Assembly will go toward hiring a data analysis contractor.

Ryan said there may be "mischief" and "shenanigans" in elections, as well as some fraud, but nothing "organized to the extent that it would have swung the electoral college and the presidential election."

In addition to the election audit called by Assembly Speaker Robin Vos, R-Rochester, the nonpartisan Legislative Audit Bureau is conducting an investigation called by the GOP-controlled Legislature. Other pending investigations include an effort led by Rep. Janel Brandtjen, R-Menomonee Falls, and a group of private citizens.

Republicans have attempted to make several changes to voting laws in the state since November, but those efforts have been vetoed by Gov. Tony Evers.