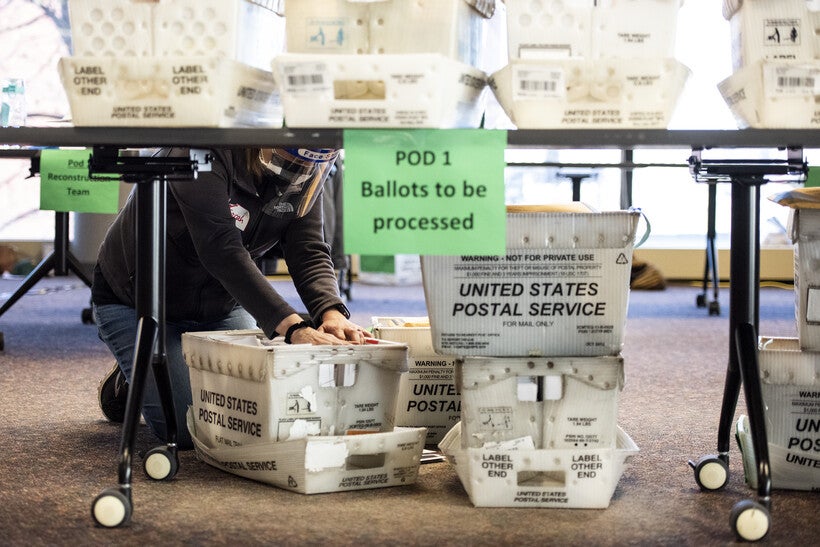 A worker kneels on the floor while looking through a box of absentee ballots Tuesday, Nov. 3, 2020, at Milwaukee’s Central Count facility. Angela Major/WPR

The misinformation was quick to emerge on Election Day and ranged from allegations about unrealistic voter turnout in Wisconsin to claims that more people voted than were eligible to do so in the state.

More rumors have now spread about discrepancies in election night vote totals reported by media, the use of felt tip pens invalidating ballots, absentee ballots being "found" in the middle of the night, and poll workers breaking state laws about absentee ballot requirements and voter rolls.

Meagan Wolfe, head of the Wisconsin Elections Commission, said officials are working steadily to share the facts about each allegation and combat the misinformation.

"When issues are reported to our office, we take them very seriously. We look into each allegation and request evidence from parties involved," Wolfe said in a prepared statement Tuesday. "At this time, no evidence has been provided that supports allegations of systemic or widespread election issues."

Here are the latest claims:

Wolfe said her office has been contacted "several times" by people concerned about differences in unofficial vote totals reported by different media organizations on election night.

According to the commission, some have used a screenshot from FOXNews.com to point out vote totals in Rock County flipped between President Donald Trump and Joe Biden on election night.

Eric Trump, the president’s son, shared an article about this allegation on Twitter.

Wolfe said the vote flip did happen, but it was temporary and the result of a reporting error by the Associated Press (AP). The AP gathers vote totals from county clerk’s websites and distributes them to media partners on election night. A spokesperson for the AP confirmed the error to PolitiFact Wisconsin.

Wolfe said similar concerns have been raised about results temporarily posted by CNN in the early hours of Wednesday morning.

"The news media is doing its best to report accurate results, but sometimes they make minor mistakes," Wolfe said in Tuesday’s statement. "These errors have nothing to do with Wisconsin’s official results, which are triple checked at the municipal, county and state levels before they are certified."

False Claim #2: Absentee Ballots Were Miscounted, 'Found,' Or Were Only For 1 Candidate

Wolfe said there have also been allegations that clerks and poll workers "stopped counting, that they mysteriously found absentee ballots in the middle of the night, or that all the votes on absentee ballots were only for one candidate."

Election officials warned ahead of Election Day that because Wisconsin poll workers aren’t allowed to begin counting absentee ballots until polls open on Election Day, several communities may be reporting results in the early hours of Wednesday morning.

Wolfe noted some central count municipalities, including Milwaukee and Green Bay, provided live webcams of the absentee tabulation, and that physical locations were all open to the public and the media.

She said representatives of both major political parties were present, as well as independent poll watchers.

The majority of absentee ballots in many communities in Wisconsin and across the county favored Biden because Trump discouraged voting by mail and Democrats urged their supporters to do so.

Wolfe said some have contacted the Elections Commission about concerns that ballots marked with felt tip pens would be disqualified.

Though it is a different allegation, some Facebook posts, mostly focused on Arizona voters, have claimed poll workers used felt tip pens to mark some voters’ ballots, making them unreadable.

"Voting equipment in Wisconsin is tested at both the local, state, and federal level for all kinds of pens and other marking devices," she said. "While we recommend that voters use the pen or marking device provided at their polling place or as instructed in their absentee ballot, the use of a felt-tip pen doesn’t invalidate a ballot."

Wolfe said some people have raised concerns about poll workers in Wisconsin contacting voters to add missing address information on absentee ballot envelopes, arguing ballots should be disqualified if a clerk added information to the envelope.

Absentee ballot envelopes in Wisconsin require a witness signature and the address of the witness in order for the ballot to be counted. In some cases, voters failed to include the witness’ address.

Some officials contacted voters or cross-referenced state records to confirm the witness’ address, then added the information.

Opponents argue only a voter could legally add that information.

"The motion to approve the guidance was made by Republican members of the Commission in 2016 and it passed unanimously," Wolfe said. "The guidance has been in effect for 11 statewide elections, including the 2016 presidential and presidential recount, and no one has objected to it until now."

Some, including state Rep. Joe Sanfelippo, R-New Berlin, have accused the Elections Commission of "ignoring state law" by not removing "more than 230,000 unverified names on the voter list."

There is dispute about what that state law dictates. A legal battle over the law made its way to the state Supreme Court, which heard arguments in the case in September and still hasn’t ruled on what the Elections Commission should do.

Those roughly 230,000 people were sent a mailer in October 2019, attempting to verify they still live at the address where they are registered to vote. The mailing from the Elections Commission goes to people flagged as potentially having moved in Wisconsin or out of state by the Electronic Registration Information Center (ERIC), a nonprofit, multi-state group that helps member states keep their voter registration lists current. ERIC identifies individuals who may have changed addresses after they file official government paperwork with a new address, like a vehicle registration or change of address form.

After receiving a notification from ERIC, the Elections Commission sends a postcard to the address where the potential mover is registered to vote and asks them to confirm whether they still live there.

Since the October 2019 mailing, many people who received it have confirmed they still reside at their address or have registered at a new address in Wisconsin, which disqualifies their previous registration. According to the Elections Commission, there were about 129,000 people who had not done either as of mid-May.

Sanfelippo also alleged "officials in the City of Madison defied state law and a court ruling and began voting weeks ahead of the time allowed by law."

No early voting happened in Madison before Oct. 20, when it was allowed under state law.

Republicans objected to two weekend events in Madison, called "Democracy in the Park," that allowed people to drop off their absentee ballots or get witness signatures on ballots they had already received in the mail. The events were essentially an in-person ballot dropbox, with the addition of providing a witness to sign a voter’s absentee ballot envelope, if needed.

No new ballots were distributed at the events, which means they do not qualify as early voting.