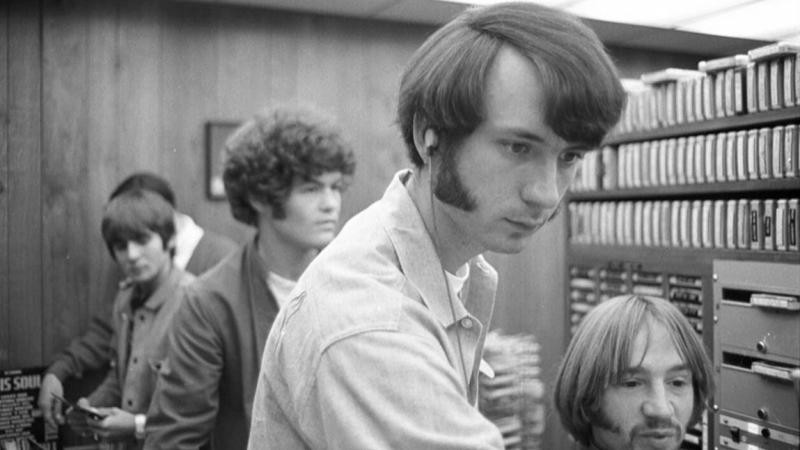 Michael Nesmith of the Monkees is shown in foreground, while Davy Jones, left, Micky Dolenz and Peter Tork are in the background. Henry Diltz/Penguin Random House

'It becomes truer the older it gets': The Monkees' Michael Nesmith on 'Head's' heady ideas

In 1968, the Monkees made their one and only feature film, "Head." Directed by Robert Rafelson — who worked with the Prefab Four on their self-titled TV series — "Head" is one of the weirdest movies ever made

It features some of the Monkees’ best songs and includes the film debut of the one and only Teri Garr. And great news for Packers Nation, there’s also a cameo by legendary Green Bay linebacker Ray Nitschke. Go Pack Go!

Band member Michael Nesmith spoke with WPR's "BETA" about the film and its long-lasting impact.

"I loved making it," Nesmith said, "I had such a good time with Bob (Rafelson) and Jack (Nicholson), and it was the high point of my whole Monkees experience. And I think it lives on well beyond the television shows. The television shows have their place, but it lives on like the music lives on. It stands on its own three feet or 12 feet or whatever they are."

One of the highlights is the band — made up of Nesmith, Micky Dolenz, Davy Jones and Peter Tork — performing a live version of Nesmith's composition "Circle Sky." There's so much energy and rawness in that performance, it sounds like a prototype of punk rock.

What does Nesmith remember about filming that performance?

"Well, Bob (Rafelson) and to a degree, Jack (Nicholson) were really curious about how to stage it and how to make it have a beat inside the movie that was consistent with the other beats that they were creating," Nesmith said.

"So you had had something on the screen. You couldn't just wave the camera around like Ken Kesey had done on the bus further and expect something to come out of it," he explained. "So they wrote up this idea that the crowd came forward at the end of the performance and began to rip our clothes off, only to find out that beneath the clothes were dummies."

"For me, it was one of the most powerful moments in the movie because it's like, that's it. That's the real thing," Nesmith added. "What you're seeing there is what we did as a band that never intended to be a band."

Peter Mills is a senior lecturer in Media and Popular Culture at Leeds Beckett University in Leeds, England. He’s also the author of "The Monkees, Head, and the 60s." Does Mills agree that Rafelson set out to deconstruct and destroy the Monkees' TV image by making the movie?

"Oh, absolutely," Mills said. "The film begins and ends with a jump from a bridge. And one of the big themes of the film is escape and persecution. Throughout the film, the Monkees are kind of attacked and pursued and reviled by all sorts of people. That theme of wanting to escape themselves is very strong in the movie. Even right at the end you think, 'Oh, finally, they've done it. But the film plays one last cruel joke on them."

Nicholson co-wrote the screenplay for "Head" with Rafelson, and the story goes that Nicholson structured the script along the lines of an acid trip. Mills said while that logic stands, he thinks of the film a little differently.

"To me, it's more like something like 'Alice in Wonderland,' which I know also has a sort of lysergic aspect to it, where one scene blossoms out of another rather than a formal, structured narrative," Mills said.

Mills explained that the roots of the film actually came out of a lost weekend in November 1967. The four Monkees got together with Rafelson, his producer partner Bert Schneider, Nicholson, and the band's manager Brendan Cahill at a resort hotel in Ojai, California.

They were "just kind of free associating under the influence of various substances, I believe," Mills said. "And Nicholson wrote it down. And that was his kind of core document, if you like, that him and Bob Rafelson spun the screenplay out of."

One of the most beautiful marriages of visuals and music in the film is the opening scene in which Dolenz jumps off the Gerald Desmond Bridge and you hear the opening chords of Carole King and Gerry Goffin's "The Porpoise Song (Theme from Head)."

Mills said it's one of his favorite moments in cinema.

"The Monkees are being chased across this bridge, and it's just Micky actually, who jumps off the bridge," he said. "And you see this figure falling and just for a few precious seconds, there's just silence. Actually, there's just kind of the wind song and then the first chords of 'The Porpoise Song' strike up. And you see the figure falling. And just as the figure who we believe to be Micky hits the water, the song breaks."

"It's absolutely exquisite, but it's also awful, too, because, you know, you've just seen somebody jump off the bridge and hit the water," he added.

About 41 minutes into "Head," we find Inspector Shrink (played by veteran actor Charles Macaulay) taking the Monkees on a tour of a factory.

Mills teaches a course at Leeds Beckett University called "Popular Music and the Moving Image." He spends one week of that course talking about the Monkees and "Head."

"When I'm talking about this stuff in the classroom, we talk about some kind of fairly hard core cultural theory, people like Theodor Adorno and Walter Benjamin, but it's the idea of culture as an industrial product," he explained.

"If you've seen the film, you'll remember the image of the box; the Monkees themselves get trapped in a box. It becomes a big sort of theme toward the second half of the film. But in that factory scene, the factory is producing boxes, each of which has a logo of the black box on it. So, you know, it's really visually sort of reinforced," he said. "And that's one of the examples where this film really repays repeat viewing because you start to see the connections between these apparently totally random scenes that don't seem to have anything to do with each other."

Mills said he thinks interest in "Head" has grown since its original release more than 50 years ago.

"I think it's going to continue to grow because there's so much in there. And incredibly, it becomes truer the older it gets. I don't know how that happens, but some of the themes become more and more relevant rather than historical."