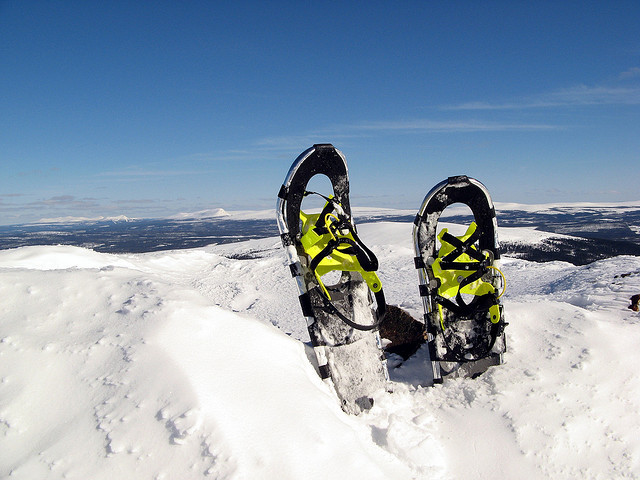 Avid Sportsman Talks About What Makes A Good Snowshoe
By Cheyenne Lentz
Share:

Darren Bush is a firm believer that snowshoeing is a pasttime that almost anyone can embrace: "If you can go for a walk, you can snowshoe," said the owner of Rutabaga Paddlesports and avid winter sportsman.

For those who are game to give it a shot, Bush said that two things are all that's needed: Some snow on the ground, and the shoes themselves.

In terms of snow, said Bush it's a simple matter of there being at least 5 inches on the ground. When it comes to picking the right snowshoe, then things get a little bit more complicated.

Bush said the snowshoe question comes down to what price you’re willing to pay. There are snowshoes that cost as little as $70, but Bush said that you get what you pay for with those models. Higher-end shoes cost as much as $350, and come with bells and whistles like aluminum frames, good bindings, and high-quality welding.

For the beginner, Bush said a nice pair can cost around $150.

"MSR snowshoes are very modern," he said. "They’re fairly inexpensive and a lot of people use them for rentals. They don’t float quite as nice, but they’re of good value."

Tubbs and Atlas also make a nice snowshoe, Bush said, but his favorite is a company out of Boulder, Colorado called Crescent Moon. One reason he likes the company is its environmental friendliness: The aluminum and stainless steel used to construct the snowshoes there comes from 85 percent recycled metal. What's more, their factory is exclusively powered by wind energy.

The last thing to consider is the size of the shoe — something Bush said depends on the individual. He said the decision largely comes down to "how much do you weigh and how much are you carrying."

He also noted that there are gender-specific shoes.

"The female shoes tend to be a little bit narrower to accommodate the way female hips move," he said. "(They're) a little bit more comfortable."

Bush also noted an amenity people can add to their snowshoe: a gaiter that attaches under the boot to protect the ankle and the calf when snowshoeing. Pack boots can also serve that function, he said, since they go up fairly high on the calf.