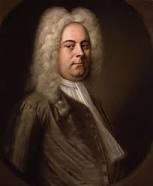 Was it the crowning of the new king, George II, or something in the air that made London audiences tire of Italian music, operas in particular, in 1727? Whatever it was, George Frederick Handel pressed on in spite of it and continued to produce operas until he and his backers ran out of money. As receipts dwindled, the quality of the audiences fell, too. After competing sopranos got into a fistfight during a performance of Handel’sAstinatte, genteel theater-goers retreated at the first sign of trouble, leaving the theater to those whose pleasure in music was second to their enjoyment of a good brawl.

During Handel’s Richard I the offending sopranos behaved themselves, but the opera closed after only eleven nights. He tried again with Siroe, King of Persia, much of it recycled from an opera he had written twenty years earlier.

It never stood a chance against a new unstoppable force.

The competition was an entertainment called The Beggar’s Opera and Londoners got their first look at it on January 29, 1728.  John Gay’s play was a clever satire based on Jonathan Swift’s suggestion of a comedy based on the story of London’s criminal underclass. It made fun of Italian opera by using ordinary street-wise characters and replacing grand musical themes with popular tunes adapted by Johann Pepusch. The show was outrageous and it was lewd; it drew London audiences in such droves that it threw the city into a carnival mood.

Handel’s new opera opened three weeks after the debut of The Beggar’s Opera. It had a wonderful libretto and a sensational cross-dressing role for its lead soprano. After nineteen nights, it folded.

The hot-tempered Handel no doubt went livid when he heard one hit tune from The Beggar’s Opera. The rousing song of the highwaymen, “Let us take the road,” was a standout. And Pepusch had stolen it note for note from Handel’s opera Rinaldo.