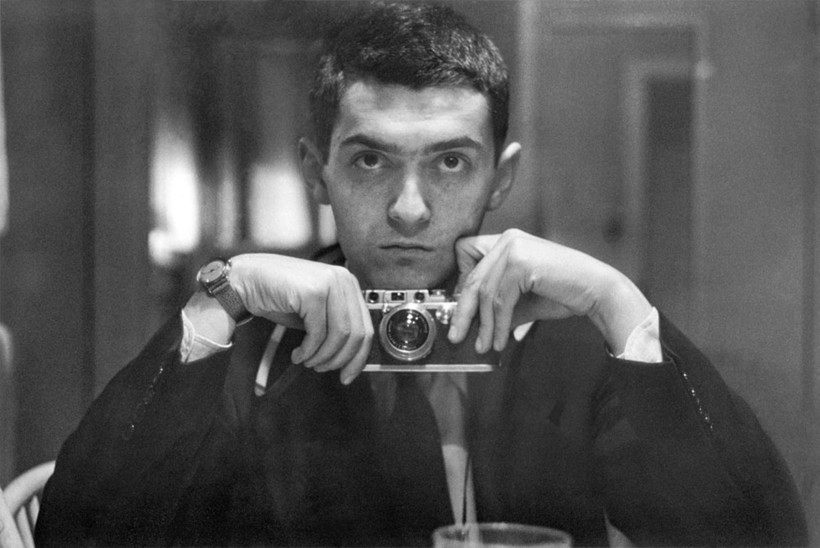 Author David Mikics On The Life, Career Of One Of Cinema's Finest Directors
By Adam Friedrich
Share:

Filmmaker Stanley Kubrick was born in 1928 and raised in a Jewish home in the Bronx. As he grew up, Stanley became obsessed with photography, chess, and more than anything else — movies.

Kubrick is responsible for so many memorable and iconoclastic films, including seminal works like "The Shining," "Spartacus" "Dr. Strangelove or: How I Learned to Stop Worrying and Love the Bomb" and "A Clockwork Orange."

He perceived his Jewishness made him an outsider. This could be the reason why his films stand apart from mainstream Hollywood fare and exist in their own decidedly Kubrickian cinematic world.

Kubrick discovered his eye for being a director while working as a staff photographer for Look magazine in 1945 at just 17 years old.

David Mikics is the author of the propulsive biography "Stanley Kubrick: American Filmmaker" where he explores the personal side of Kubrick’s films. Long thought to be as cold and intense as the films he made, Mikics finds a much warmer impression of the man.

Mikics tells WPR's "BETA" he sought to answer some enigmatic questions lingering in Kubrick's works, including outlining a grand unified theory of control.

"The worlds of Kubrick's movies are about control. For example, you have — even early in his career — 'Paths of Glory' from 1957 about World War I. You have the generals in that movie who are manipulating, moving around the soldiers, forcing them to go into the trenches and to die en masse for seemingly absurd reasons. In 'Dr. Strangelove,' you have the quite crazy idea of controlling the world, subjecting the world to a nuclear holocaust," explained Mikics.

"In 'The Shining,' you have the hotel that controls Jack and his family. In 'Full Metal Jacket,' you have the basic training segment at the beginning of that movie in which the raw recruits are reshaped into Marines through the most brutal kind of controlling process," he continued. "So I do think control is one of the one of the basic aspects of these films."

So much of this theory leads right back to the control sought out by Kubrick himself. Mikics said even early in his career, Kubrick made sure his vision would be contractually obligated.

"He was making some comments on a movie contract early in his career in the 1960s, and he said, 'I must have total, final, complete annihilating control over the picture,'" said Mikics. "He was able to have the kind of control over his movies that very few filmmakers have accomplished in a Hollywood setting."

That confidence is on full display in what many consider Kubrick's magnus opus, 1968's "2001: A Space Odyssey." For Mikics himself, it's a personal favorite and he argues the best science fiction film of all time. He highlights how groundbreaking the film was not only in terms of a cinematic experience, but how it left audiences with more questions than conclusions, which was rare for films of the era.

"It was really the first Hollywood movie that forced the audience to speculate," Mikics said. "There is so much wonder in it. There are so many unanswered questions. The end of '2001' is something that no one will ever solve. People always ask, 'Well, what does that mean?' But it's utterly ambiguous. It is chilling, but it is also inspiring or thrilling."

Kubrick is responsible for one of the most popular and enduring horror films of all time with the 1980 Stephen King adaptation, "The Shining." In fact, Kubrick's suspenseful tale about a family trio trapped in a hotel through a winter inspired the full-length documentary, "Room 237," in 2012 about all the fan theories surrounding it.

"The Shining" also highlights another through line in Kubrick's work, Mikics said. He argues that in addition to featuring elements of control, many of Kubrick's films are meditations on marriage. Kubrick wove both of those philosophies together in "The Shining" when he infamously frustrated King by altering or removing much of his novel's source material.

"Kubrick changed a lot of things in the book, but I think what he was looking for was something that is about the theme of family and about the theme of marriage," Mikics said. "People don't often think of Kubrick as a filmmaker focused on marriage, but he really is. You look at some of his key movies — 'Barry Lyndon' (1975), 'The Shining,' 'Eyes Wide Shut' — all of those films are about marriage."

Kubrick, who was very deliberate in releasing his films, would wait seven years after "The Shining" to release his Vietnam epic "Full Metal Jacket" in 1987. Kubrick had long wanted to make a film about Vietnam. Adapting Gus Hasford's book "The Short-Timers", Kubrick set out to structure the film in two halves.

The first would focus on the Marines' basic training and was cemented into pop culture lexicon through the breakthrough performance of R. Lee Ermey's Gunnery Sergeant Hartman. The second half placed those same Marines in Vietnam where they discovered the horrors of battle.

Notably, Kubrick's film would arrive shortly after Oliver Stone's "Platoon" (1986) based on Stone's own experiences in Vietnam. Mikics argues that while "Platoon" is more of a conventional film about the heroism of war, "Full Metal Jacket" better conveyed the confusing experience of Vietnam to the viewer.

"'Full Metal Jacket' really sort of disorients you. It brutalizes you first and then it disorients you. And that, I think, corresponds to the experience of Vietnam much more than Stone's," Mikics said.

"The soldiers go to Vietnam, and they get caught up in the Tet Offensive and nobody knows quite what is happening. This was one of the basic experiences in Vietnam," Mikics continued. "You didn't know what to do or where you were really. You didn't even know what the point of a war was often. So Kubrick is trying to convey all that and the remainder of the movie. He's really trying to get that across. And I think he does so very effectively."

Kubrick waited another long interval between "Full Metal Jacket" and what would ultimately be his final film, "Eyes Wide Shut," (1999) starring then husband and wife, Tom Cruise and Nicole Kidman. Again returning to this concept of marriage and control, the film is inspired by the Arthur Schnitzler's novella, "Traumnovelle" and its reckonings with jealousy and sexual fantasy in marriage.

Kubrick waited nearly 40 years before adapting Schnitzler's work. He wanted to wait until his (and his wife, Christiane's) apprehension about the novella's source material subsided. The couple feared tackling this subject matter so early in their own marriage could be problematic.

"I think it's a very personal movie, perhaps the most personal of all of Kubrick's movies. It's about marriage and it's about a marriage that is finally happy," said Mikics.

Kubrick died shortly after filming and editing "Eyes Wide Shut" and ahead of its release. At the time, there was critical and commercial confusion with his swan song, but Mikics believes it has aged well and is a fitting final note for Kubrick.

"The last moments of 'Eyes Wide Shut' — that's exactly what he wanted to do in his final film," said Mikics. "He was actually sleeping with an oxygen tank in his bedroom as he finished the movie. So he knew it would be his last, and I do think he got what he wanted. And it's magnificent."