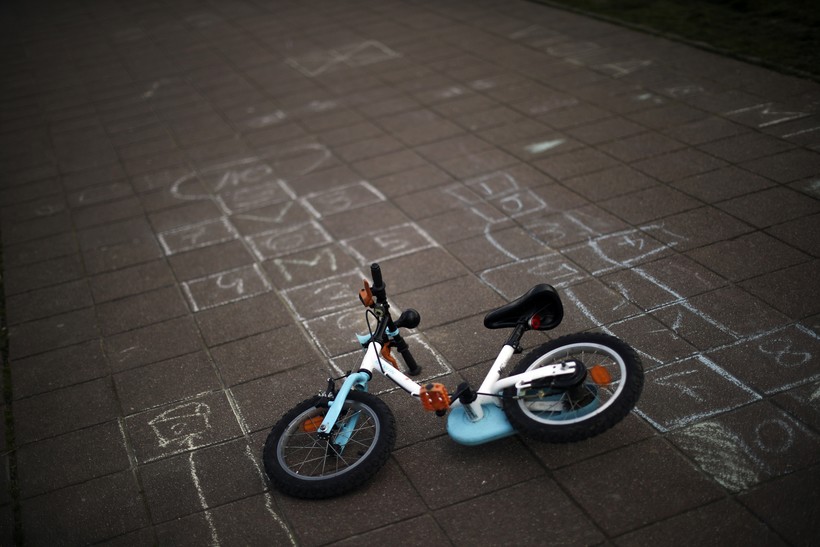 A child bicycle lies next to hopscotches sketched on the ground in a public park during a partial lockdown against the spread of the Covid-19 coronavirus in Brussels, Sunday, March 29, 2020. Francisco Seco/AP Photo

For families that share custody of children, staying at home and practicing social distancing can be confusing and frustrating.

Many people have asked WPR's WHYsconsin "is it safe to exchange kids between households during the pandemic?"

Gov. Tony Evers’ safer-at-home order allows travel related to the exchange of children pursuant to custody orders, but many people still have questions. Some parents are feeling fearful for the health and safety of their kids while other parents fear their kids may be kept away from them.

'I Can’t Protect My Household'

In Shorewood, Ashley Johnston’s family is a blended one; she has three children from a previous marriage, and her current partner has one child as well.

Her kids spend two days a week plus every other weekend at her house. The rest of the time they’re with their dad, who lives about 20 miles away in Franklin.

The placement schedule is court-ordered, Johnston said. But ever since Evers issued the safer-at-home order March 24, she has grown more afraid with every exchange.

"Just fearing that they are not going to comply and that they're going to expose the children unnecessarily," she said.

She’s scared the kids might be exposed to or spread the virus, and wishes she didn’t have to move the kids back and forth so much.

She said she thinks it would be safer if they could stay in one place for the time being, and maybe do video calls or outdoor visits with whichever parent they aren’t staying with. But, she said her ex-husband wants to continue with the established schedule.

Johnston reached out to her family law attorney to ask what she can do. The answer: follow the court order, until and unless they can get it changed. She also called the local police department, who told her if she violates the order, she could be cited or even arrested.

At this point, Johnston feels helpless.

She could go to court to try and modify the placement order. Although in-person court proceedings are suspended right now, parents can still file motions. Some courts have made adjustments to how they operate, including prioritizing placement disputes and holding hearings over the phone or by video conference.

Marsha Mansfield is an emeritus clinical law professor at the University of Wisconsin Law School. She said judges’ main concern is what’s best for the children, but situations like this can be tricky because it’s one parent’s word against the other’s.

"The challenge always is who's making a decision about what the higher risk is," Mansfield said.

Mansfield said there could theoretically be cases where going against a placement order is in the child’s best interest, but they would be extreme. For example if one parent lived in New York City, an epicenter of the virus, and wanted to put the child on a plane to come visit.

"Certainly that's a situation where you would hope, first of all, that the parents in trying to act in the children's best interest, would come to an agreement to postpone that placement time, allowing the other parent to have makeup time at a later date," she said.

But, she said unless parents can agree on a compromise, the guidance is clear.

"You follow the placement agreement or order, if it's an order by a judge, to the best of your ability," she said.

The state Department of Children and Families has put out brief recommendations for families that share custody, including what to do if a child is exposed to or shows symptoms of COVID-19.

Leaders of groups that deal with families in crisis also released recommendations for families, including being mindful, creative and understanding, but overall being compliant with court orders.

Milwaukee family law attorney Margaret Hickey said her firm has been busy over the last few weeks with concerns related to the pandemic, including placement issues and worries about homework not getting done at one parent’s house.

"The last resort is to go to court, because if the homework is not getting done, then the court needs to make a modification to make sure that the children are being attended to," she said.

Hickey also expects to see more cases involving child support payments, with record numbers of people suddenly unemployed. She recommends people who pay child support who are laid off file a motion to reduce that payment immediately, because the change will not be retroactive.

Hickey said the best case scenario for any issue is for parents to work together to figure out what’s best for their kids during the pandemic.

"This is a hard enough time for people without having to deal with the court system," she said.

But for parents like Johnston, out-of-court compromise may not be an option.

"I just feel completely helpless at this point," she said.

Johnston hopes she can eventually add language to their placement order spelling out what to do with the kids in a pandemic. But for now, she’s going to keep exchanging her kids as scheduled.