Voting has always been a priority for Chrystal and Terron Edwards. But in April, they decided it could be dangerous for them to go to the polls.

Terron is a diabetic, their son has spina bifida and their daughter has asthma.

All three would have been more at risk for severe symptoms if they caught the coronavirus, which began spreading across the state in March and led to the decision to close schools and some businesses, and to issue a stay-at-home order. So the couple planned to vote absentee and ordered their ballots in mid-March, but they never received them.

The couple felt disenfranchised. And the experience left Chrystal feeling like the system is broken.

"It’s like I could literally go on YouTube or Google and figure out how to fix my dryer," Chrystal said. "But there is no instructional video on how to fill out an absentee ballot."

April was the first time Terron, a community organizer in Milwaukee, hadn't voted in 20 years. 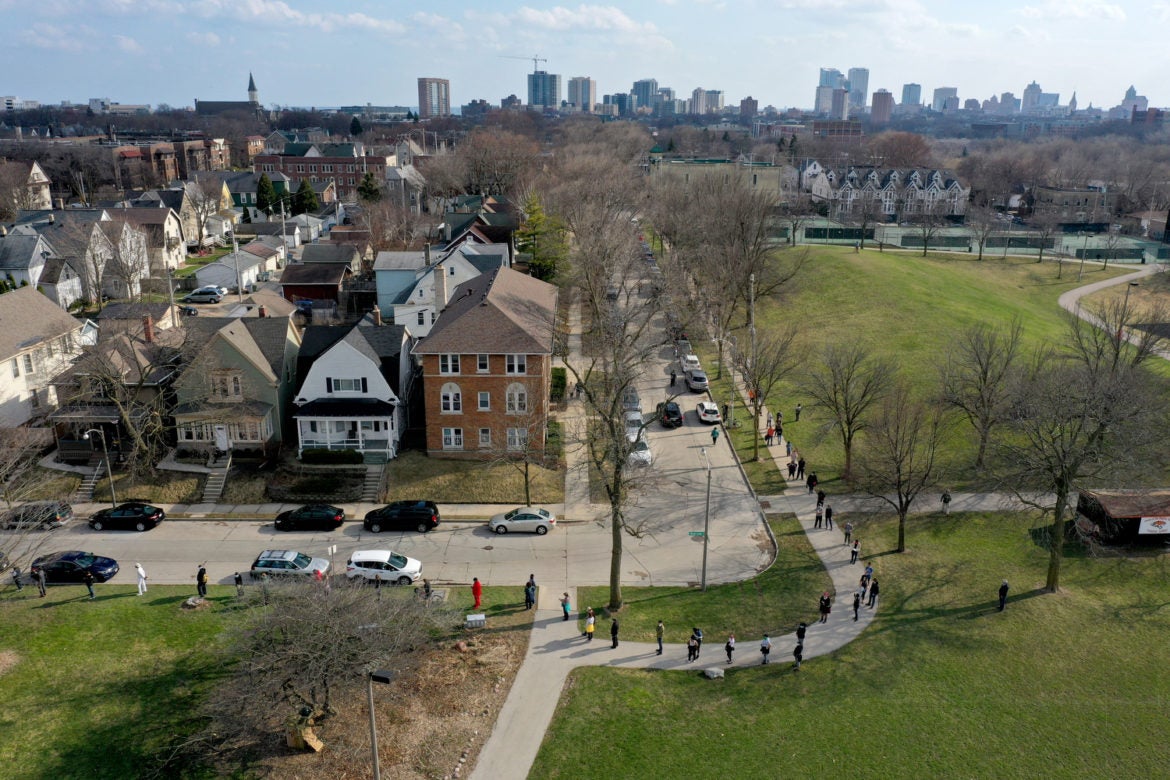 Voters stand in a blocks-long line as the Milwaukee city skyline rises in the background on April 7, 2020, during the primary election. Coburn Dukehart and Lauren Fuhrmann/Wisconsin Watch

Attitudes have changed about the coronavirus pandemic. But for voters at high risk for severe complications of COVID-19, the disease can be deadly. Wisconsin has made great strides since the April election to make absentee voting easier. But some worry the challenges they faced in the spring could keep them from voting in November.

The Edwardses were among more than a dozen Wisconsin plaintiffs who filed a lawsuit in April, six days after the election, trying to change several provisions of Wisconsin's voting laws for the next election. This included voter ID laws and provisions requiring people voting absentee by mail to get another person to witness their signature.

A coalition of lawyers for the state and national Democratic Party and nonprofit groups say thousands of voters will again be disenfranchised in November if Wisconsin’s current voting law doesn’t change. So far, a couple requests have been granted in federal court.

In his September ruling, federal Judge William Conley extended the deadline for counting absentee ballots by six days and extended the online and mail-in registration deadlines by a week.

But he rejected the attempt to waive voter ID requirements.

"Whatever the problem was with the uncertainty with COVID-19 for a few weeks where people might have locked their door and not seen anyone, we’re well past that now," Conley said in August, before the ruling.

The Wisconsin Elections Commission has created new strategies since the April election aimed at calming people’s fears. Absentee ballot applications have been sent to 2.6 million registered voters, and municipal clerks are scaling up staffing and adding drop boxes.

Dean Knudson is a former Republican state representative from Hudson who now serves on the Wisconsin Elections Commission.

Knudson, who helped pass the voter ID law when he was in the Legislature, said the unprecedented increase in absentee ballots in April did lead to some trouble for less tech-savvy voters who had trouble uploading their photos — a required step when requesting your absentee ballot.

Republicans have argued a photo ID is necessary to stop fraudulent voting, although studies have shown illegal voting is rare.

To help make requirements about absentee voting clear, he said, a mass mailing was sent out months before the Nov. 3 election to registered voters encouraging people who want to vote absentee to request a ballot quickly and mail it back early. The period for absentee in-person voting runs Oct. 20 to Nov. 1.

Knudson believes Wisconsin has run in-person elections smoothly during the pandemic, so anyone who is worried about voting absentee should head the polls during early voting or on Election Day.

"Unless you are elderly or a particularly vulnerable individual (with) health concerns that would make COVID a greater risk for you, anybody that's uncertain about voting absentee should avail themselves of their right to go vote in person," Knudson said.

Wisconsin's April election broke records when more than 960,000 people voted by mail. Already, nearly half a million ballots have been returned for the November election. 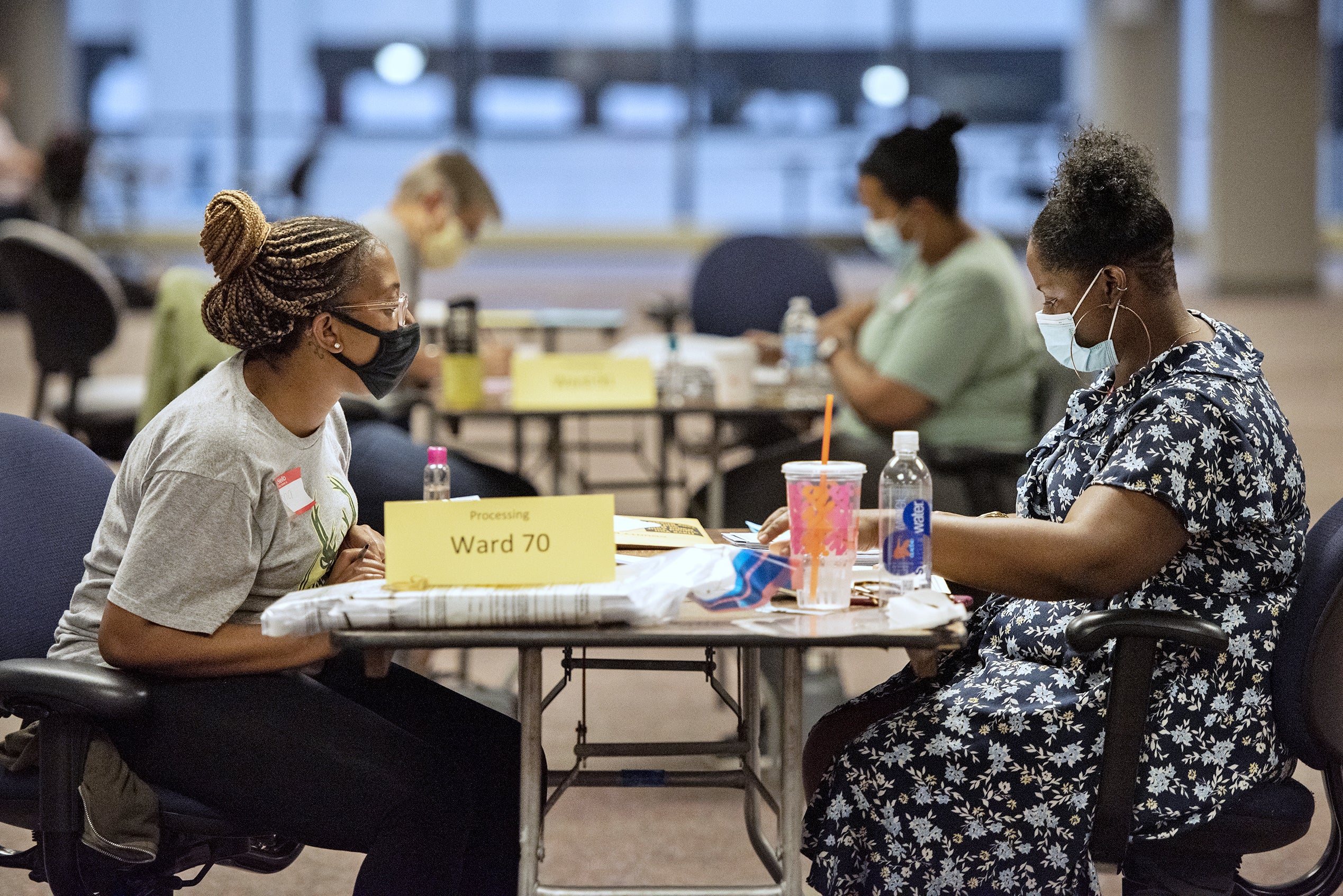 Milwaukee resident William Laske, another plaintiff in the election lawsuit, has a respiratory disease and is on oxygen. He said he requested, but never received, his absentee ballot for the April election.

At the time of the interview in September, Laske hadn't yet requested his absentee ballot, but he said he's planning to vote absentee in November.

No matter what, he says he is voting.

"This one is terribly important," Laske said. "I think I would chance my life to go and vote one way or another, I think that’s how important this one is."

Editor’s note: An earlier version of this story included a truncated quote from Dean Knudson. This story has been updated to include the full quote.