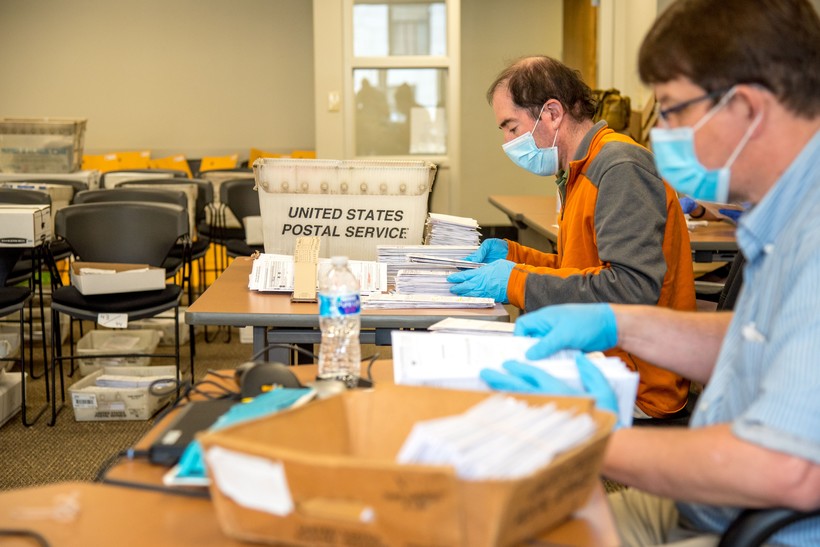 A federal judge has extended the deadline for mail-in ballots to be counted in Wisconsin for up to six days after the Nov. 3 election.

Judge William Conley issued the order on Monday in response to a lawsuit from the Democratic National Committee, Democratic Party of Wisconsin and several nonprofit groups. The lawsuit sought to change a number of state voting laws because of the COVID-19 pandemic.

Under the ruling, clerks across the state can accept ballots until Nov. 9 as long as they are mailed and postmarked on or before Election Day. The ruling knocks down a state law that requires ballots to be in the possession of local election officials by 8 p.m. on Election Day in order to be counted.

It also increases the possibility that election results in a critical swing state might be unclear on Election Night.

In his ruling, Conley said "election workers’ and voters' experiences during Wisconsin’s primary election in April, which took place at the outset of the COVID19 crisis, have convinced the court that some, limited relief from statutory deadlines for mail-in registration and absentee voting is again necessary to avoid an untenable impingement on Wisconsin citizens’ right to vote, including the near certainty of disenfranchising tens of thousands of voters relying on the state’s absentee ballot process."

Other changes approved in Conley's order include:

The Democratic Party of Wisconsin lauded the ruling on Monday afternoon, saying it will allow more people to vote.

"We welcome the court’s decision to expand voting in Wisconsin so that more voters have the opportunity to register and have their voices heard in this election," said party spokesperson Courtney Beyer.

The lawsuit also sought to temporarily lift Wisconsin's voter ID law for mail-in ballots, as well as the state's requirement to provide proof of residence for online or mailed voter registration. Conley didn't grant those requests.

However, Conley directed the state MyVote and WisVote websites to inform voters about what it means to identify as an "indefinitely confined" voter on a mail-in ballot, which allows that voter to bypass the photo ID requirement.

Conley ordered the websites to include language approved by the Wisconsin Elections Commission earlier this year that reiterated state law "does not require permanent or total inability to travel outside of the residence" for a person to be classified as "indefinitely confined." Under the guidance, people who are confined in their homes due to the COVID-19 pandemic would be able to label themselves as "indefinitely confined."

Conley issued a similar order in a different election lawsuit in April before the presidential primary. In that ruling, Conley extended deadlines for voters to request absentee ballots and for clerks to receive them.

According to the Wisconsin Elections Commission, 79,000 additional ballots were counted in April thanks to the court’s six-day ballot receipt extension and roughly tens of thousands utilized an extended online voter registration window. However, problems with postmarks did create confusion for some election officials.

Monday's ruling could be appealed to a higher court. In the April case, an appeal to the 7th Circuit Court of Appeals and U.S. Supreme Court upheld much of Conley's decision.

Andrew Hitt, chair of the Republican Party of Wisconsin, which was a defendant in the lawsuit, said the party is "reviewing the order and working with the other parties in the case to determine our next steps."

During arguments for the case in August, lawyers for the GOP-controlled state Legislature, Republican Party of Wisconsin and Republican National Committee said existing Wisconsin laws sufficiently uphold Wisconsin voters' rights, even amid a pandemic. They argued voters have ample time to request and return mail-in ballots and that in-person voting locations will be available for those who are comfortable with that option in November.