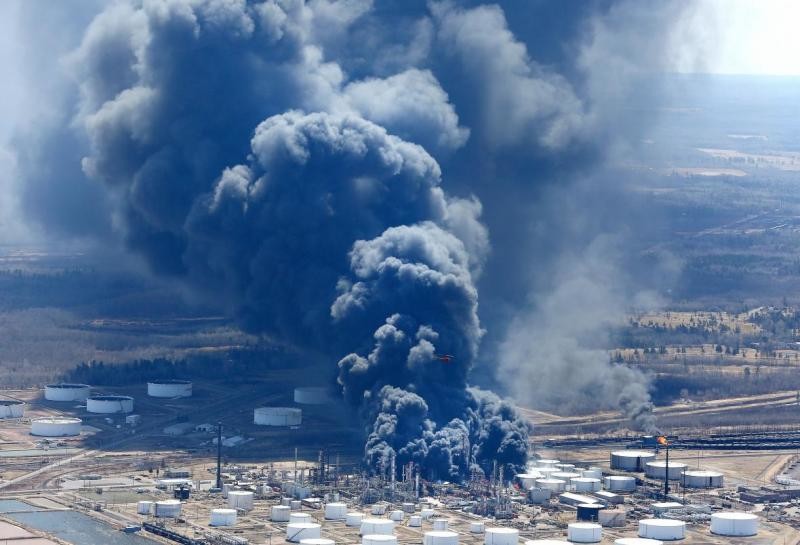 Husky Energy announced Wednesday it will invest more than $400 million to rebuild its oil refinery in Superior and maintain its use of hydrogen fluoride. The highly toxic chemical, which can be hazardous to human health when released, prompted a temporary evacuation of residents in the city of 27,000 after an explosion and series of fires at the refinery last April.

Construction is set to begin this fall and the refinery expects to resume some operations in late 2020.

"We very early on decided we did want to rebuild. We wanted to stay in the Superior area, and we wanted to continue to invest in this refinery," said Rob Symonds, chief operating officer for Husky Energy.

The refinery will be rebuilt with the same capacity as before. The facility is capable of refining around 45,000 barrels per day. Husky said it will continue to produce asphalt, gasoline, diesel and other fuel oils to the region. The rebuild is expected to include advanced technology and be more energy efficient, according to the company.

Symonds said it explored other alternatives to hydrogen fluoride, such as sulfuric acid and ISOALKY technology. However, he said those options were not viable.

"The hydrogen fluoride alkylation unit, as it's called, is fundamental to making gasoline. This is the gasoline that we all use in our cars today. Reformulated gasoline — the alkylate — is fundamental," Symonds said. "If we took the unit out, we couldn't make gasoline and that would essentially make this refinery nonviable for us."

Ginger Juel, co-founder of the Twin Ports Action Alliance, has been pushing for the removal of hydrogen fluoride at the refinery.

"Hydrogen fluoride is not the only one that can produce high-octane gasoline," said Juel, noting sulfuric acid and ISOALKY technology do as well.

Symonds said a conversion to sulfuric acid has never been done in the global refining industry, noting the transition would require taking out everything that exists. He said it would also require treatment and transportation of sulfuric acid.

"Put in context, today we have one truck a year that brings in hydrogen fluoride," he said. "If we were to go to sulfuric acid, we would go to one truck a day."

However, Juel argued hydrogen fluoride is more dangerous than sulfuric acid because it has the potential to impact a greater portion of the population if released.

"Those are the type of alkylation technologies that they’re going to use," she said.

Symonds said the ISOALKY technology, which is a non-acid system, is emerging and hasn't been commercially proven. Husky's chief operating officer said being the first to implement the technology was not something they were "enthusiastic" about with the risks involved in trying newer systems.

Husky plans to maintain the chemical while adding protection to prevent any possible release, including a physical barrier that could potentially catch debris in the event of an explosion. The refinery's hydrogen fluoride tank was about 150 feet away from the explosion last April and punctured a nearby asphalt tank.

Husky will also add a rapid acid transfer system that can be activated in the event of a release, which would transfer the chemical to a separate holding tank. The company is also proposing enhanced leak detection that includes a laser detection system and cameras, as well as additional layers in its water system that include a water curtain and two water cannons already in place. Husky has said those systems acted as they should during the explosion and fires last spring and no hydrogen fluoride was released during the event.

Juel questioned what may happen if any safety systems failed to operate in the event of another explosion. She thinks elected officials in Wisconsin and Minnesota should denounce the use of the chemical.

"I’d like to see legislation introduced that prevents any new use of this chemical in any facility in the United States," she said.

The refinery has applied for a prevention of significant deterioration permit with the Wisconsin Department of Natural Resources, which is essentially a building permit to cover emissions and operations. The company hopes the permit will be approved by October to move forward with the rebuild this fall.

Husky said last summer it experienced around $40 million in expenses and $20 million in damages related to the explosion and fires. The Canadian company announced last month it had received nearly $249 million in insurance proceeds for property damages, rebuild costs and business interruption.

Company officials say the refinery employs around 200 workers as part of its operations and it expects to create 350 jobs during construction.

"I think that continued employment and having that security of knowing that this company is really going to take care of this facility, improve the safety going forward and maintain their employment is really important to this — not only the employees, but the community itself," said Kollin Schade, plant manager of the refinery.

Three dozen people sought medical attention as a result of the incident on April 26, according to a report last August from the U.S. Chemical Safety Board. The agency has said a worn slide valve appeared to allow flammable hydrocarbons to mix with air, which later ignited in equipment downstream from its fluid catalytic cracking unit.

Mayors for Duluth and Superior called on Husky Energy to remove hydrogen fluoride from its operations last May. Some community members and groups have also pushed for its removal, including the Twin Ports Action Alliance. The group released the results of a survey last month that found around 37 percent of participants supported banning the chemical, roughly 28 percent were opposed and 35 percent were undecided.

Superior Mayor Jim Paine said he was disappointed in the refinery’s decision to maintain use of hydrogen fluoride in its refining process.

"I want them to rebuild. I want to see them continue to employ good union workers at the refinery both in the rebuild and in the future operations," Paine said. "We want to see meaningful safety reviews and improvements, not just now in the rebuild, but consistently in the future. We want safety to be the main priority."

The U.S. Occupational Health and Safety Administration fined Husky $83,000 for eight worker safety violations last October, finding the refinery failed to inspect and test equipment to ensure it was fit for service. The agency also said the company didn’t appropriately address hazards during shut downs. The refinery was beginning a five-week shut down for maintenance when the explosion occurred.

The Chemical Safety Board has twice visited Superior to provide updates to the community on its investigation. However, the agency has no enforcement authority and can only make recommendations to the refinery as it moves forward with operations.

Superior's mayor said he spoke with Husky about using the emerging ISOALKY technology.

"I think where there are emerging technologies and improved safety we should be on the front lines of that," said Paine. "I’d like to see them continue to improve safety, and, eventually, yes, switch from hydrogen fluoride as their alkylation process."

Multiple federal and state agencies are still conducting investigations into the incident, including the Chemical Safety Board, U.S. Environmental Protection Agency and DNR. Husky ended air monitoring in mid-November last year and water quality sampling is ongoing at the facility and in nearby Newton Creek.

The company has paid out the majority of 3,399 claims that have been filed, but the outcomes of two lawsuits brought by a group of community members and contractors are still pending. As of March, around 350 workers and contractors were addressing cleanup and demolition at the site, according to Husky’s website.

An open house is planned from 5-8 p.m. Tuesday, April 16 at Superior Middle School, 3625 Hammond Avenue, to share the rebuild plans and timelines.