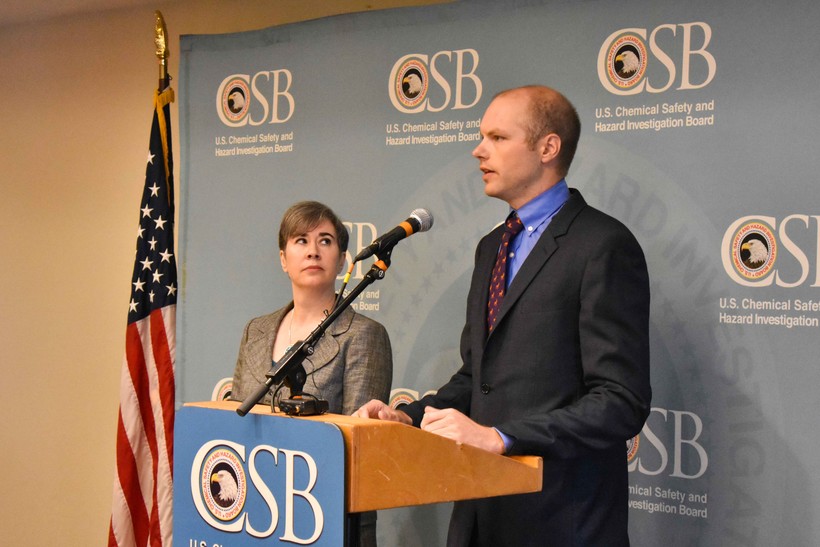 Kristen Kulinowski, interim executive of the U.S. Chemical Safety Board, and, Mark Wingard, lead investigator for the CSB, provide details on initial findings of their investigation into the refinery incident on April 26 at a press conference Thursday, Aug. 2, 2018.

Investigators and staff with the U.S. Chemical Safety and Hazard Mitigation Board provide an update on the Superior refinery explosion in August of 2018.
Elle McMahon/WPR

3 Dozen People Received Treatment As The Result Of Injuries
By Danielle Kaeding
Share:

The U.S. Chemical Safety Board said Thursday that a malfunctioning valve in an alkylation unit appeared to allow a flammable mixture to form and likely caused the explosion at Husky Energy's refinery in Superior on April 26.

The CSB reported 36 people received medical attention related to the explosion and fires during an update on its investigation. The agency is reporting that 11 refinery and contract workers sustained "OSHA recordable injuries."

As previously reported by WPR, the explosion took place in the refinery’s fluid catalytic cracking (FCC) unit around 10 a.m. April 26. The refinery was in the process of shutting down for a five-month turnaround to do routine maintenance and inspections.

Kristen Kulinowski, interim executive of the CSB, said the mixture of oxygen and hydrocarbons in the FCC unit likely caused the explosion.

"We want to know why that happened," said Kulinowski. "We are conducting a metallurgical analysis to determine the integrity of the equipment involved in the incident, as well as pursuing other lines of inquiry."

She said it was too soon to say whether the incident could have been prevented.

Mark Wingard, lead investigator for the CSB, said the agency has done preliminary testing of a slide valve that failed to separate oxygen and hydrocarbons within the unit. He said that allowed a flammable mixture to form during the shutdown.

"That flammable mixture then traveled away to a different part of the unit, found an ignition source and you have the explosion," he said.

Wingard said their findings were similar to a slide valve that had corroded at an Exxon Mobil refinery in Torrance, Calif., in which it allowed hydrocarbons and air to mix. The revelation is concerning to citizens who live in the Twin Ports, including Ginger Juel, co-founder of the newly created Twin Ports Action Alliance. The group is advocating for the removal of hydrogen flouride, a highly toxic chemical, that is used in the refinery's alkylation process.

Inspection and maintenance of the slide valve by the refinery will be examined by the agency moving forward. OSHA regulators had previously cited the refinery for a valve violation in 2007 under its former owner Murphy Oil, according to a 2011 report by the Wisconsin Center for Investigative Journalism.

Husky recently bought the refinery from Calumet in 2017. Juel said she’s concerned the company didn’t have all the information it needed to protect the community.

"Husky’s new to our city. They are new owners to the refinery so perhaps they had not been aware of the aging infrastructure or the structural integrity of the components operating on site,” she said.

Kulinowski said it was fortunate the incident occurred during a scheduled break.

"Many of the workers who were in the unit prior to the explosion had moved either into blast-resistant buildings or away from the process unit," said Kulinowski. "The use of blast-resistant buildings was a key recommendation from the CSB’s investigation of another refinery explosion in Texas City, Texas, more than 13 years ago. We hope that the recommendations that result from this investigation may have a life-saving impact across the industry."

The explosion and subsequent fires caused the temporary evacuation of the city due to the risk for the potential release of hydrogen fluoride, which is known to have devastating health impacts. The fires blazed within 200 feet of the tank containing around 15,000 pounds of the chemical.

"Going forward we may be looking at the HF unit, but it's too premature to say whether that will be a focus of our investigation," said Kulinowski. "It's within our purview to look at that and we will be looking at the debris that was strewn across the site and determining whether there were additional potential hazards that resulted from that."

Superior Mayor Jim Paine and Duluth Mayor Emily Larson have called for Husky Energy to end use of the toxic chemical at the facility. The refinery has said that it’s looking at alternatives to hydrogen fluoride as it moves forward with the rebuilding process. Superior's mayor was in Japan as part of a sister city visit on Thursday and unavailable for comment.

The fires caused Husky to incur more than $40 million in expenses and around $20 million in damages at the Superior refinery. Husky has said around 450 workers and contractors are currently employed at the refinery during the recovery process, which is expected to last 18 months to two years. No layoffs are expected.

Husky spokesman Mel Duvall said in an email Thursday that the company will continue to work with the CSB to understand the cause of the explosion.

"The safety of our employees and the community remains our top priority and we will continue to work collaboratively with the CSB and other investigating agencies," wrote Duvall. "The lessons learned will assist with our decisions as we begin the process of rebuilding the Superior refinery."

The CSB hopes to provide a final report on their findings within 18 months to two years from the date of the incident. Other federal agency investigations at the refinery are ongoing.

Editor's note: This story was updated at 3:30 p.m. Thursday, Aug. 2. 2018 to include additional comments from CSB and Husky Energy.