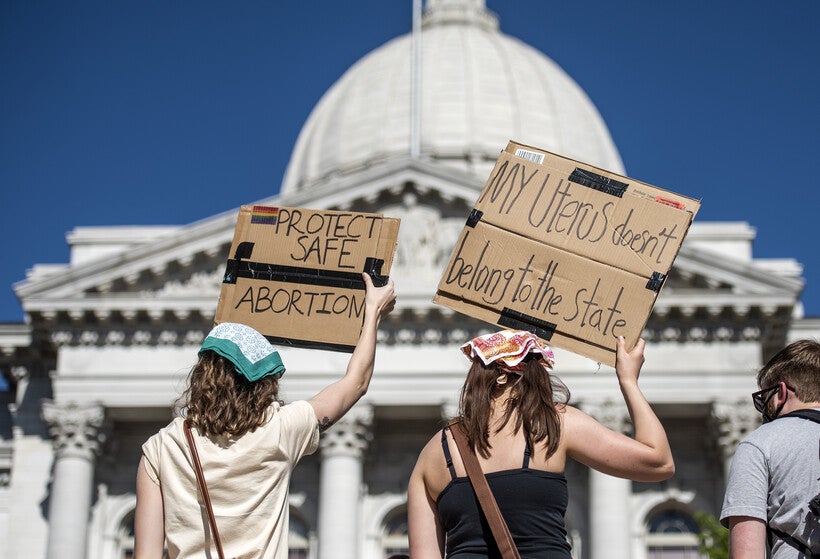 Protesters hold signs while protesting the U.S. Supreme Court’s draft ruling on Roe vs. Wade on Saturday, May 14, 2022, at the Wisconsin state Capitol in Madison, Wis. Angela Major/WPR

Hundreds gather at state Capitol to push for reproductive rights

Evers, Baldwin among those who spoke to supporters seeking to thwart potential abortion ban
By WPR Staff
Share:

Hundreds of supporters of abortion rights gathered at the state Capitol in Madison on Saturday afternoon to rally amid growing concerns that a U.S. Supreme Court decision in the coming weeks will overturn legalized abortion.

Planned Parenthood Advocates of Wisconsin had organized the late-afternoon event. Gov. Tony Evers and U.S. Sen. Tammy Baldwin, D-Wis., were among those who spoke and urged supporters to keep battling back to safeguard reproductive rights, which could change dramatically if the Supreme Court overturns Roe v. Wade, the landmark 1973 case that said pregnant people have a constitutional right to an abortion.

Before the crowd of vocal demonstrators, Evers declared himself a "proud defender of reproductive rights."

"I'm old enough to remember the way things were before Roe. And it wasn't pretty," he said. "And that's why I'm here to tell you today that we cannot go back." 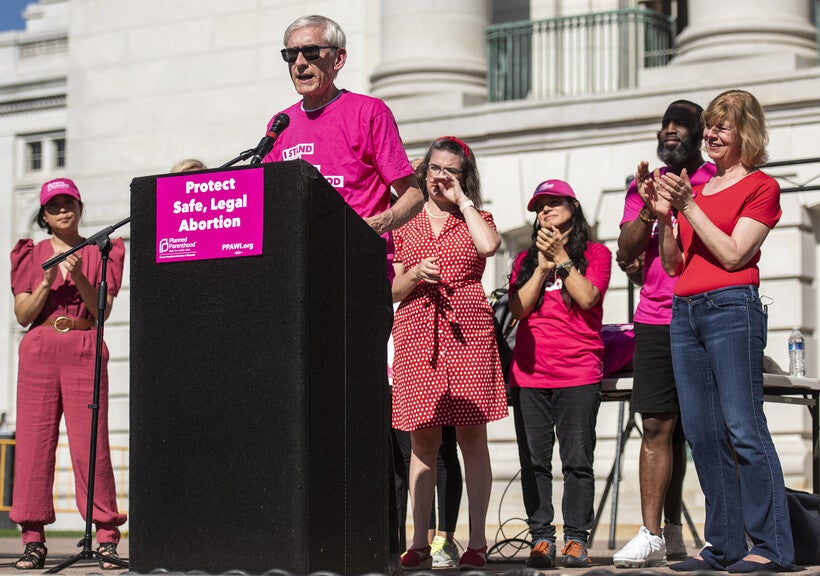 Gov. Tony Evers addresses a crowd of protesters who oppose the U.S. Supreme Court’s draft ruling on Roe vs. Wade on Saturday, May 14, 2022, at the Wisconsin state Capitol in Madison, Wis. Angela Major/WPR

He said the impacts of the Supreme Court's eventual decision could fall especially hard on low-income Wisconsinites. The governor also pointed to a lot of work ahead should the decision prove pivotal.

"We'll raise our voices in the streets, in these marble halls and at the ballot box," Evers said. "And we're going to talk to our friends or family members, our coworkers and our neighbors. And we're going to tell them what this fight means to us."

Likewise, Baldwin sought to prepare supporters for the challenges ahead.

"If you're here today, then there's really a good chance that, like me, you're feeling frightened and angry about the Supreme Court turning the clock back on our right," she said. "(You) might also be feeling exhausted, discouraged and hopeless. Yeah, and that's OK. Know that you are not alone. But I feel all those things. But I also feel a determination and a fight in me. And all of you. We are in this fight together."

Baldwin warned that the court's decision could bring a state law from the 19th century back into effect.

"I really don't want to take women back to the Wisconsin of 1849," she said. "I don't want to leave this generation of women with fewer rights that their mothers and grandmothers had for decades." 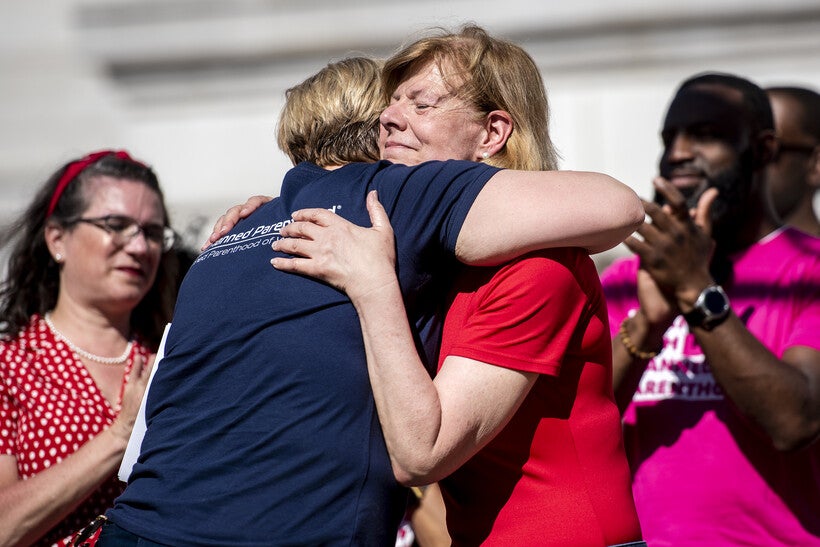 She labeled the current Supreme Court as "activist" and accused the court's majority of "trying to legislate from the bench. And for the first time in our nation's history, it is poised to strip away a constitutional right."

She said she was proud to stand with those attending the rally "and the overwhelming majority of Wisconsinites who believe abortions should be safe and legal."

"Politicians can't interfere with our freedom to make decisions about our own bodies and future. Know that this senator will not give up the fight and neither should any of you. I stand with you and we will march forward together in this fight for our fundamental values, rights and freedom," she said.

Among those attending, Madison resident Judith Strand, and her daughter, Katie Gleason, said they came to push back against a change that could undue decades of "progress." 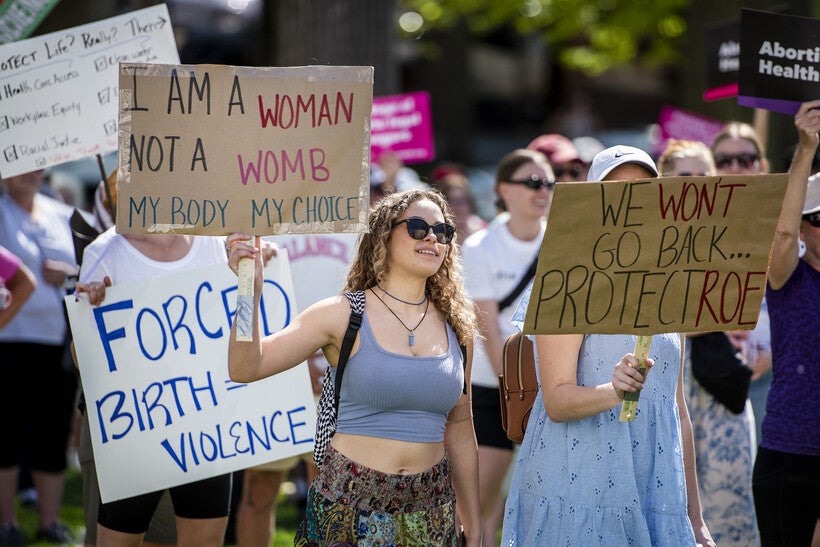 Protesters hold signs before a rally to support abortion access Saturday, May 14, 2022, at the Wisconsin state Capitol in Madison, Wis. Angela Major/WPR 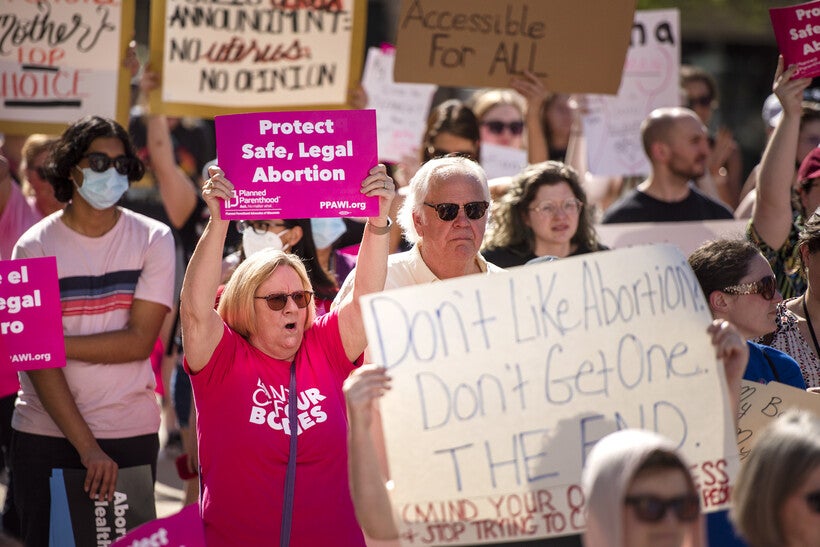 Protesters cheer as speakers address the crowd Saturday, May 14, 2022, at the Wisconsin state Capitol in Madison, Wis. Angela Major/WPR

"This is just a huge leap back. It's just a slap in the face. And the attitude towards women, that (this) … represents is stunning. And for people … to see that actually is really upsetting," Strand said.

"It's harmful, it's hurtful, it's scary and it's just the future for me, for my daughter, for everything," Gleason said.

They both said they were shocked at the leak of what the court is considering. The pair pledged to keep fighting. 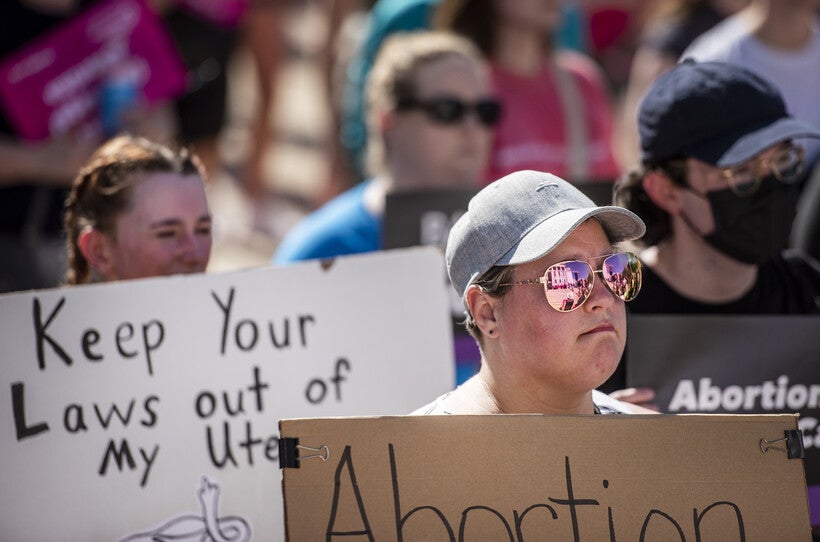 Saturday's rally drew far less than the thousands that Madison police said organizers had anticipated. According to the Wisconsin State Journal on Friday, police had called in extra officers, a special events team and officers mounted on horses.

Other rallies held in other cities

Wisconsin's rally was one of several protests planned nationwide on Saturday. According to NPR, more than 100 "Bans Off Our Bodies" rallies were set to take place Saturday across the country, drawing thousands of reproductive rights supporters. Protests were held in Washington, D.C., New York and Chicago.

In Chicago, thousands of protesters, including Illinois Lt. Gov. Juliana Stratton, filled Union Park, near the city's downtown. They chanted "abortion is health care" and "abortion justice," according to NPR. Attendees gathered at tables seeking volunteers with groups like Planned Parenthood of Illinois and the Chicago Abortion Fund. Protesters carried signs saying, "Bans off our Bodies," "I Remember 1973" and "Against Abortion? Don't Have One."

According to NPR, Stratton said the rally was about economic and racial justice as much as it was about abortion rights. She told the crowd that abortion should be safe, legal and accessible and to take action — to not just march today but to vote in November for candidates who support abortion rights.

Protests throughout the country have surged after news broke earlier this month that the Supreme Court was considering overturning Roe v. Wade.

The court's draft opinion, which is under consideration by the Supreme Court justices, was leaked to political website Politico and has since been confirmed by the court as authentic. An investigation is underway on the source of the leak.

The court's official opinion on the case is expected to come sometime before the court adjourns for the summer in late June.

NPR reported that, according to data from Guttmacher Institute, a research group that supports abortion rights, at least 26 states are "certain or likely" to ban abortions if Roe V. Wade is overturned.

According to the state Department of Health Services, there were 6,430 induced abortions in Wisconsin in 2020. That figure was comparable with the prior two years, according to state data that dates back to 1976. The state recorded the fewest number of abortions at 5,612 in 2016.