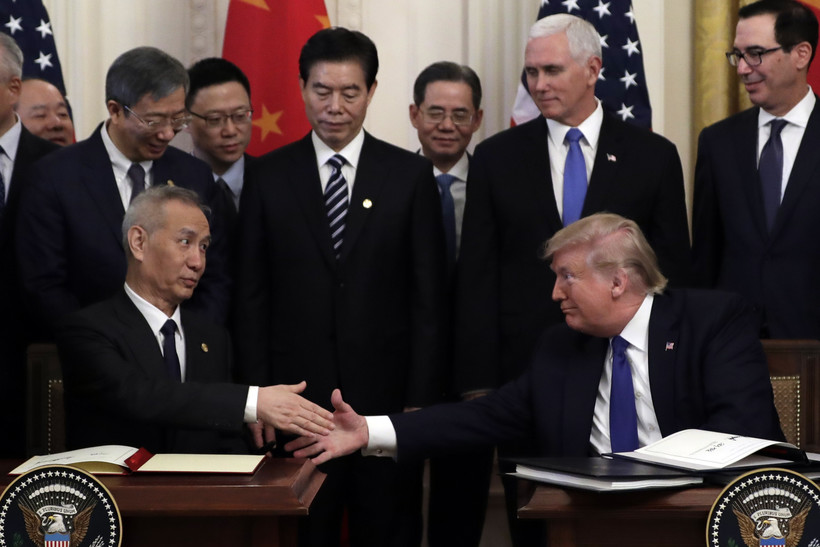 Deal Includes Promise From China To Buy Billions Worth Of American Goods, But Keeps Tariffs In Place
By Miranda Suarez
Share:

The deal doesn’t get rid of import taxes, or tariffs, but it does reduce some of them, Trump said at the signing at the White House.

The deal also includes a commitment from China to import an additional $200 billion in American goods and services over the next two years. That includes $80 billion worth of United States food, agricultural and seafood products.

Vice President Mike Pence congratulated the president on the trade war and the deal.

"Early in this administration, you made it clear that the era of economic surrender was over, and you took a strong stand for American jobs and American workers," he said. "You said to our friends in China that things had to change, and thanks to your leadership, today, the change begins."

In 2018, the year the trade war began, China was Wisconsin’s second largest agricultural export market, according to the Wisconsin International Agribusiness Center. The next year, the center linked the tariffs to a drop in total exports.

"Nearly one-third, $1.43 billion of Wisconsin agriculture and food exports, are affected by the countervailing tariffs in China," according to a fact sheet from the center.

University of Wisconsin-Madison political scientist Jon Pevehouse said even if all tariffs are lifted, there’s no guarantee Wisconsin farmers will get their Chinese markets back.

"There have been instances where U.S. farmers have been the victim of, say, retaliatory tariffs, where then those tariffs get lifted, and the state, whether it's Mexico, Germany, whoever, doesn't go back to buying Wisconsin products," Pevehouse said.

China retaliated against American tariffs with its own tariffs on important Wisconsin products like soybeans and dairy. Aaron Stauffacher of the Edge Dairy Farmer Cooperative said he hopes the second phase trade deal negotiations can address them.

"Make no doubt about it, our exports have decreased over to China as a result of the retaliatory tariffs situation," he said.

Pevehouse said agriculture "gets thrown under the bus" because it isn’t the most important issue in the trade war — it’s leverage. Tariffs on specific products are used to get other concessions, like intellectual property protections, which are also included in the Phase 1 deal.

"Trade deals are often not about trade anymore," Pevehouse said.

The U.S. Senate will soon vote on implementing another trade deal, the U.S.-Mexico-Canada Agreement (USMCA). In a statement, Wisconsin's Democratic U.S. Sen. Tammy Baldwin expressed support for the USMCA, with some reservations.

"The USMCA implementing legislation includes many changes I have pushed for with the Trump administration, including truly enforceable labor standards that benefit our workers, and making sure that we confront Canada’s unfair trade barriers and Mexico’s limits on Wisconsin cheese exports so that we have a trade deal that increases market access for our Wisconsin dairy farmers and cheesemakers," Baldwin said.