Wisconsin has gotten a lot of attention for being an important swing state in this year’s presidential election.

As part of WPR’s WHYsconsin, we recently received a question from listener Rachel Thorson about that. Rachel asked, "What about Wisconsin's people and culture lend it to being a swing state? How long has that been the case?"

The answer: Wisconsin has been an on-again, off-again swing state for a very long time. For more than a century, its voters have ridden waves of close elections or flip-flopping party allegiances.

According to Jonathan Kasparek, professor of history at the University of Wisconsin-Milwaukee, one of Wisconsin’s distinct swing state periods was in the late 19th century.

"Some of those elections were really close between the Republicans and the Democrats," he said.

Kasparek said voters’ party allegiances in those days had a lot to do with their ethnicity and religious affiliations. Republicans tended to be Wisconsin natives or protestant immigrants.

"A large part of that is because the Republican Party tended to draw from people from the Whig tradition and other reformers that emphasized prohibition and tended to be nativist," he said. William Dempster Hoard was nominated as the Republican candidate for Wisconsin governor in 1888. He was elected and served one term, during which he pioneered the fight against food adulteration. Photo courtesy of the Wisconsin Historical Society

In 1873, German protestants swung from the GOP to push back on a Republican policy that cracked down on taverns and alcohol consumption. They considered the law an attack on their culture, Kasparek said.

In 1890, the same group made a similar move after incumbent Republican Gov. William Dempster Hoard signed the Bennett Law, which required schools to teach in English. Lutherans didn’t want to implement the policy in their parochial schools.

In the early 1900s until the 1930s, Wisconsin looked less like a swing state — at least on the surface.

Republicans won election after election, but Kasparek argues the state was far from ideologically unified. There were several factions within the Republican Party then, including Progressives, led by Robert "Fighting Bob" LaFollette.

"The Republican primary between the Progressives and the stalwarts — that was kind of the ‘swing’ area," Kasparek said.

LaFollette's Progressives eventually split off to form their own party. "Fighting Bob" won Wisconsin’s vote for president by about 17 points in 1924, but lost the national election as a third party candidate with only about 16 percent of the vote. Robert M. La Follette, Sr. speaks to a large crowd from the Wisconsin state Capitol steps. This speech marked the end of his independent campaign for the presidency. Photo courtesy Wisconsin Historical Society

The 1960s: An Age Of Moderates And Swing Voters

Another swing period for Wisconsin came in the 1960s. Wisconsin voters went from supporting Republicans to Democrats and back again in presidential elections and governor’s races.

Barry Burden, director of the Elections Research Center at UW-Madison, said flip-flops between party control then were driven by independently-minded voters and state parties that played things more toward the middle.

"And that would lead people to cross over and support candidates because they liked them, not because of their party affiliation," Burden said.

Some of Wisconsin’s most well-known politicians came from this time period, including Republican Gov. Warren Knowles and Democrat Gaylord Nelson, who served as governor and U.S. senator. Wisconsin started to look less like a swing state in the late 1980s. Democrats won seven presidential elections in a row here, beginning in 1988.

"Those were just tiny margins, smaller than (President Donald) Trump’s (2016) margin," he said. "But they get counted in the Democratic column because the Democrat won the state."

Tight margins are getting more common these days. For nearly the entire 20th century, Wisconsin never had a presidential election decided by less than a percentage point. Since 2000, it has had three.

According to experts, one of the biggest factors spurring Wisconsin’s tight political divisions right now is how its population is spread between urban and rural areas.

Kathy Cramer, professor of political science at UW-Madison, said Wisconsin is somewhat unusual compared to other states in that its population is fairly evenly divided between cities and small towns.

"The balance of rural and urban is roughly equivalent in Wisconsin and nowadays we know quite a bit about how that tends to correlate with partisan leanings," Cramer said.

Political pundits and scholars have been tracing the contemporary urban-rural divide in politics for a while now. A number of recent studies, including a 2018 analysis by the nonpartisan Pew Research Center, have shown increased support for GOP candidates in rural areas across the country.

And Wisconsin culture has certainly reflected that national trend. President Donald Trump holds up hats that read "Make Our Farmers Great Again!" before boarding Marine One at the White House in Washington, Thursday, Aug. 30, 2018, on his way to a rally in Evansville, Ind. Andrew Harnik/AP Photo

Cramer, who wrote a 2016 book about the urban-rural political divide in Wisconsin in particular, spent six years talking politics with voters who live in the state’s smaller, less densely populated towns and villages.

She said she’s leery of overgeneralizing about those voters, because they’re certainly not a monolithic group, but her research did uncover a consistent, notable perspective shared by a number of residents there.

Cramer said many described feeling "overlooked," "ignored," and "not really respected" by political leaders in the state.

Cramer said that feeling in a community makes it easier for conservative candidates to convince voters they shouldn’t support more government programs and spending — things generally championed by Democrats — because they feel they won’t get their fair share.

"That perspective just makes it very possible for a politician from a more conservative lean to make a small government argument to people," she said.

Meanwhile, according to Amber Wichowsky, professor of political science at Marquette University, Wisconsin Democrats have strengthened their support among urban voters.

"Democrats, over the last several decades, have actually grown their vote shares in the heavily, highly populated parts of the state," she said.

Wichowsky also pointed out those urban areas are also getting bigger, which adds to liberal candidates’ strength statewide.

A good way to understand this phenomenon is to look at Hillary Clinton’s vote totals in Wisconsin in 2016. Even though Clinton won only 12 of Wisconsin’s 72 counties, she only lost the state by about 23,000 votes. 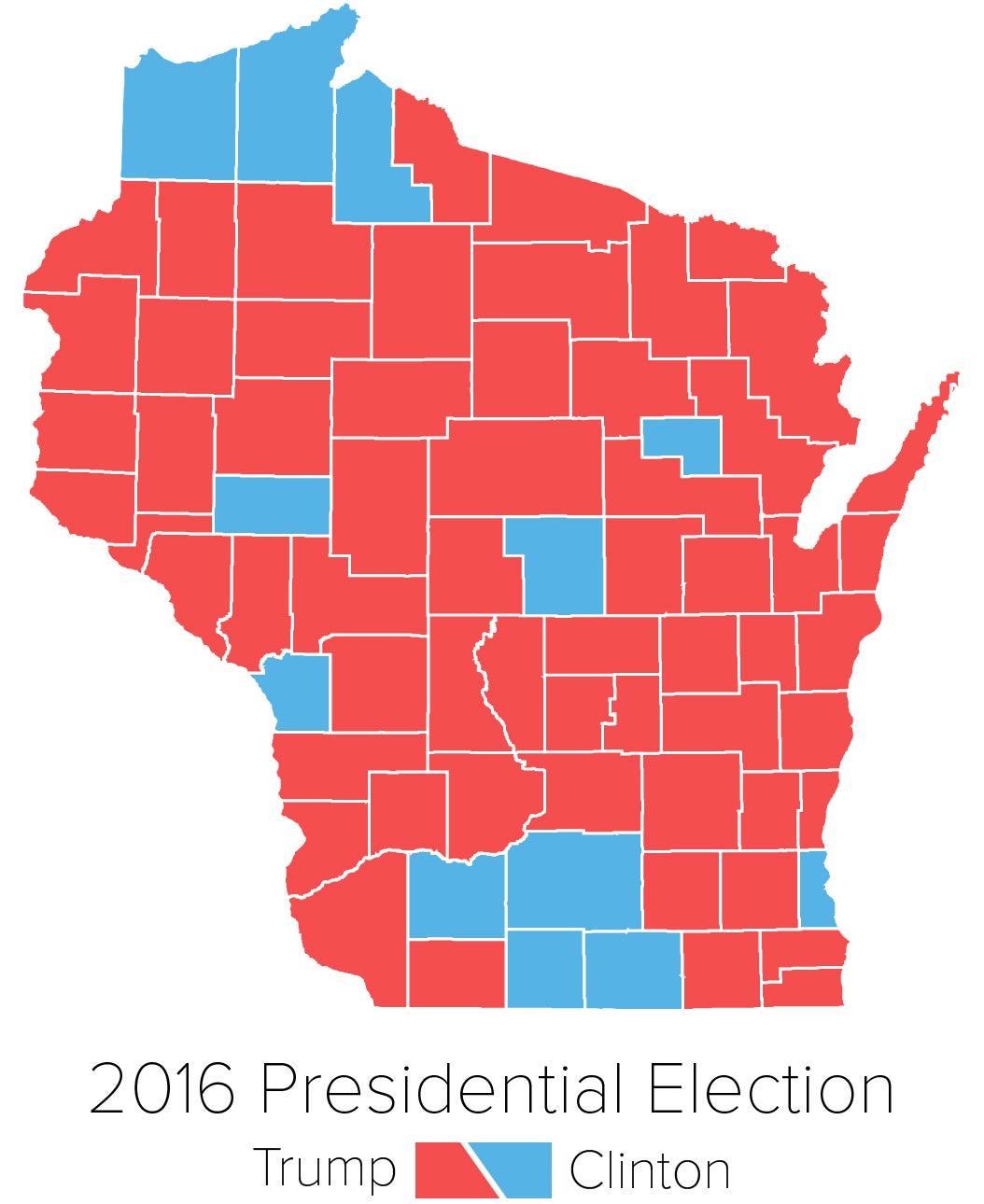 Voters in Dane County, where Madison is located, and Milwaukee County cast a combined 506,519 ballots for Clinton, accounting for 17 percent of all votes for either candidate statewide. Other strong numbers for Clinton came from Brown County, home to the state’s third-largest city, Green Bay, and from smaller cities like La Crosse and Eau Claire.

Though 2016 is a clear example, Wichowsky warns against people thinking this urban-rural divide is a new phenomenon in Wisconsin — even though it seems more people are talking about it since President Donald Trump’s win.

"These changes absolutely pre-date Trump," she said. "But Trump really solidified that sort of divide or division between parts of the state."

Burden agreed the urban-rural divide has been brewing in Wisconsin for decades. He thinks it started around the 1960s, with the development of suburban communities.

He said the state’s current divisions are in a kind of "magical balance" with one another, so Wisconsin's long run as a swing state might not be ending anytime soon.

This story came from an audience question as part of the WHYsconsin project. If you have a question about the politics in Wisconsin, submit your question and we might answer it in a future story. Go to wpr.org/WHYsconsin.