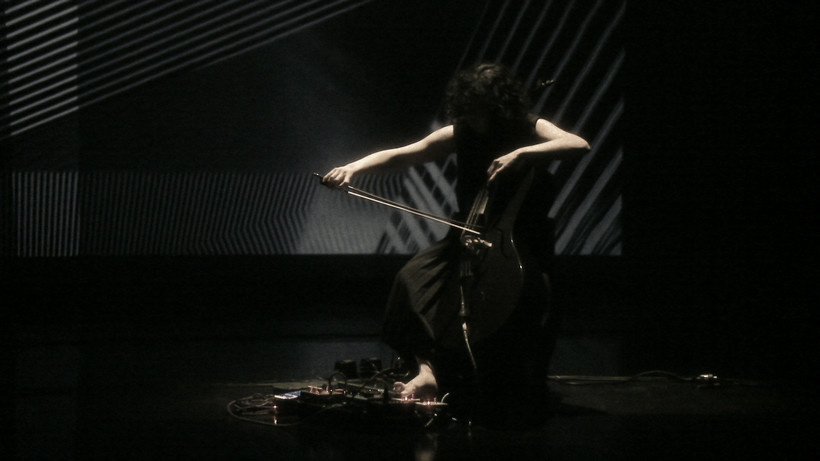 How A Cello Conducts An Orchestra Of Guitar Pedals

Cellist Clarice Jensen Thinks A Cello Can Be So Much More Than A Cello
By Mark Riechers
Share:

Clarice Jensen picks up her cello for her solo. She plugs it into the conductor — an electric guitar pickup tapped into a vast orchestra of guitar pedals — octavers, loopers, delays, freezes. She plays just three notes, but they are bent and looped and reshaped into something that contains aggression layered onto beauty, a sound beyond anything that resembles a cello suite from Johann Sebastian Bach.

And she wouldn’t have it any other way.

"(The first time I heard it), I thought it sounded terrible," said Jensen, speaking to Charles Monroe-Kane for "To The Best Of Our Knowledge." It sounded nothing like the 35 years of cello solos that she had been playing prior to the electronic experiment. But once she found ways to build something entirely new — not to add gimmicks to things she'd played before — she was hooked.

"I'm still buying things and reordering my pedal board all the time so it's just sort of like a constant evolving thing about trying to find a sound —trying to evolve," she said.

Why evolve at all? It's nothing against Bach. Jensen said she just thought there was so much more that a cello could do. Both musically, and for her personally.

"I started when I was 3 (years old) or so," she said. "After these 34 years of playing it, I'm just kind of tired of the sound. I want to use it with restraint. I don't want the cello sound to be the main sound."

Jensen said the guitar pedal board changed everything. She described her music as "durations of things," music that has layers that each listener might tune to varying degrees, all cascading over one another.

"There's not a prescribed emotion or there's not a purpose or there's not a specific depiction," said Jensen. "So it's sort of a blank canvas for the listener. You're really doing something for someone who's listening to it. As opposed to making them experience something, you're sort of inviting them to choose their own adventure."

It doesn’t sound like a cello anymore. But that doesn’t mean the cello isn’t the star, she said.

"It's just sort of a different exploration of how a cello can sound not like a cello," she said.

It's music that takes you somewhere else. To a cold, desolate space of danger and excitement. To a disquieting but peaceful, lonely landscape. Or, at least as she plays it, completely unstuck from time.

"It's always a little surprising when we get to the end," said Jensen, as she finished her live performance in studio. "It's sort of like 'Oh, we're already here.' It really is kind of like time goes away, and it is very peaceful."