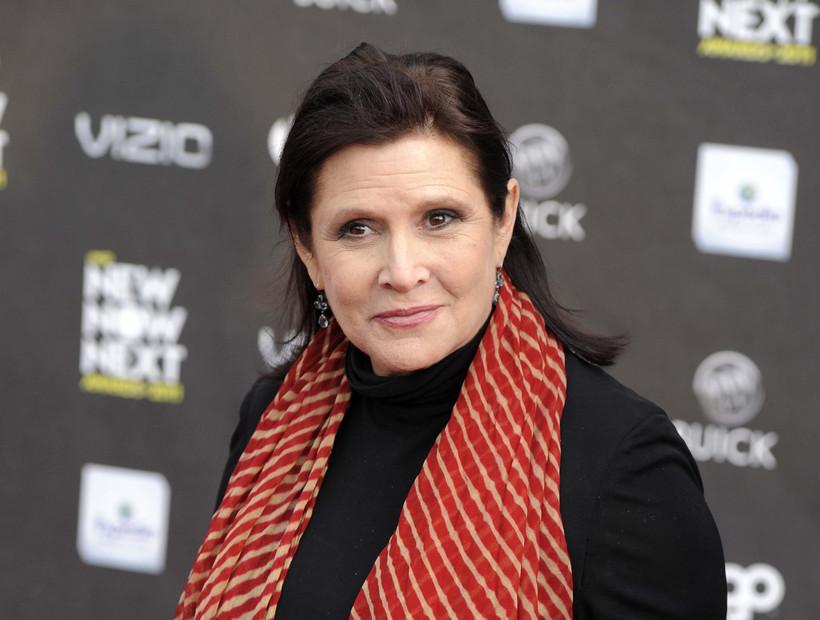 Carrie Fisher lived a full life as an actor, a novelist and memoirist, while struggling with an inherited drug addiction and serious bipolar disorder. Fisher died of cardiac arrest due to sleep apnea and atherosclerosis on Dec. 27, 2016 at the age of 60. In her biography, "Carrie Fisher: A Life on the Edge," Sheila Weller provides a detailed account of the life and work of Fisher.

Fisher was the daughter of singer, dancer, and movie star Debbie Reynolds and singer Eddie Fisher. In 1958, Eddie Fisher had an affair with Elizabeth Taylor who was a family friend after Taylor's husband, film producer Mike Todd, was killed in a plane crash.

"And then suddenly, he fell in love with this beautiful woman who had just been widowed," Weller told WPR's "BETA." "And everything erupted. I mean, it was an extraordinary scandal in America. It was a story that housewives and everybody kind of sunk their teeth into. And Carrie grew up with lights flashing, you know, in her eyes as a little girl with paparazzi on the front lawn. I think her grandfather once yielded a rifle against the paparazzi. So it was a huge public event and it also was a hurtful event. Her father left her and her mother."

"She certainly brought it," Weller said. "Later, she started improvising her own lines, and she would go to be in movies and immediately tear up the script. And the producers and directors and actors thought that what she was doing was much better than what was on the page. But at the beginning, she was not a writer, she was a young girl. But she had an attitude, an hauteur, that gave her that non-damsel-in-distress attitude. And it worked.

"And young women who saw it saw, they saw a feminist heroine in that role," Weller continued. "She was a princess, so she had that grandeur about her, and she got into dangerous situations and got herself out of them. And she killed Jabba the Hutt."

Fisher met singer-songwriter Paul Simon while she was filming "Star Wars." They dated from 1977 until 1980. Then they got back together and married in 1983.

"She adored his music and his literacy," Weller said. "They were both short, and she made jokes about that. 'Don’t stand next to me, they’ll think we’re salt and pepper shakers.' They were both very verbal and witty. He was calmer, he was more serious. She was much younger and incredibly smart. People said that you could see the infatuation, it was incredibly strong."

Drugs had a big impact on Fisher's life.

"Her father was an addict, I think we can say that," Weller said. "He had a predisposition to overuse of drugs. There’s a genetic link to it, it’s not always that way but I think in her case, it was. In the '70s, a lot of people were doing cocaine as a 'recreational drug.' Some people like Carrie and John Belushi, for them it couldn’t have been just a recreational drug. It was something that was hard to give up."

In 1987, Fisher made her mark as a writer with the release of her first book, "Postcards from the Edge," a semi-autobiographical novel.

"I think she always wanted to be a writer. As a young girl, she read the great writers. She really admired Dorothy Parker," said Weller. "And after this and a couple of other books, she said 'I’m not an actor who writes, I’m a writer who acts.' It was gathering in her."

"That was a wonderful show. It went on for years. She had a board with a pointer of her crazy family and all the relationships." Weller said. "She talked about being weight-shamed, being age-shamed. She made fun of herself in a way that was so hilarious, women especially, especially mid-life women, felt relief in it. They felt here was a celebrity who was making fun of the same things that I feel secretly ashamed of — being overweight, being older than I would like to be. She took herself to task. She talked about the 'contract' she signed to look always the way she looked in the metal bikini and she said, 'Clearly I broke the contract.'"

Weller said that there are so many things that make up Fisher's legacy, including the way she brought people together.

"After she died and there was this whole private memorial service at her house, they said: ‘Where are we without Carrie? Without Carrie, we wouldn’t even know each other.’ It’s unusual for a woman, especially a long-single woman, to be the focal point like that," said Weller. "And her incredible honesty. I think her destigmatization of bipolar disorder was very important and is enduring. And of mental illness in general. We see ads for bipolar medication on TV now. We never saw them before. When she said in December 2000 to Diane Sawyer, 'I am mentally ill. I can say that.,' that broke some barriers. It really did. It relieved a lot of people, especially women, who were hiding what they had and would stay home from work and make excuses."