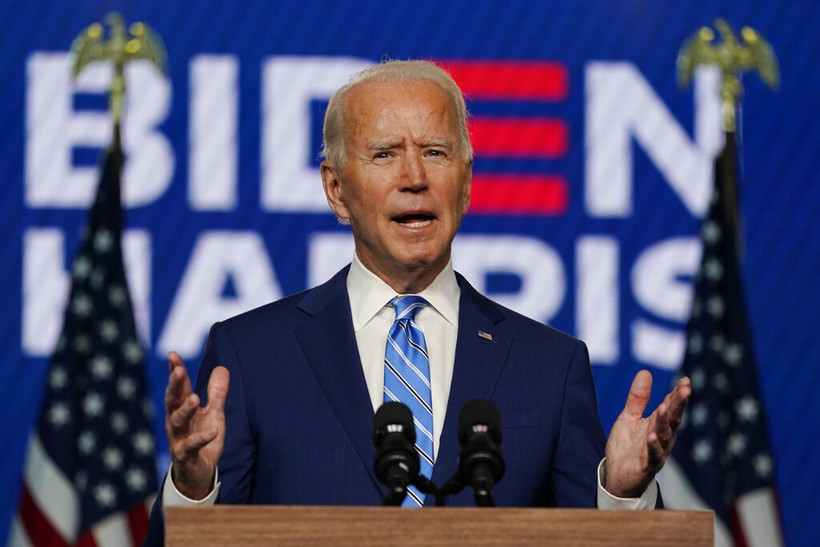 President-Elect Could Rely On Executive Orders To Implement Plan, Although Some Experts Say Legislation Isn't Out Of The Question
By Danielle Kaeding
Share:

Former Vice President Joe Biden proposed the most sweeping plan for combating climate change of any presidential candidate during his campaign. Now that he's president-elect, those engaged in the push for climate action will be watching for whether, and how, those plans might come to fruition.

Some of Biden's proposals, like a $2 trillion plan to lower emissions and transition to clean energy, are likely to hinge on bipartisan support from congressional lawmakers. Biden also plans to take a number of executive actions to address climate change and promote a clean energy transition, orders that activists, researchers and utilities say could play a role in Wisconsin’s energy transformation.

Biden wants the nation’s economy to go carbon-neutral by 2050 and eliminate emissions in the power sector by 2035. That means utilities would need to transition away from burning fossil fuels like coal.

Dana Kelley is among those who have been pushing utilities like We Energies to transition to alternative energy sources. On a recent drive to Oak Creek just south of Milwaukee, she noticed a sewing shop and a day care center within a few miles of the utility’s South Oak Creek coal plant. She's worried about the impact pollution could have on communities nearby the plant.

"Coal is one of those ugly things that is flowing through Milwaukee, and people of color, especially, are being affected in a negative (way) and at a disproportionate rate," said Kelley. "We're paying with our health because particulate matter is able to get under our unsealed doors and through our unsealed windows that we can't afford to fix and retrofit. And, then, we're also paying with our wealth by the energy that’s seeping out of our unsealed doors and windows."

Kelley is an assistant pastor with the Reviving Faith Movement and a lead organizer with Northside Rising, a Citizen Action of Wisconsin cooperative that supports the Green New Deal. The climate proposal to reduce greenhouse gas emissions and an equitable energy transition has been supported by Democrats and vilified by Republicans.

Kelley said Biden’s plan parallels the Green New Deal in many ways. Both would create clean energy jobs she thinks could be a step in the right direction toward climate and economic equity. She’s aware political division may make it difficult to reach those goals.

"We have to come together so that we can grow together," said Kelley. 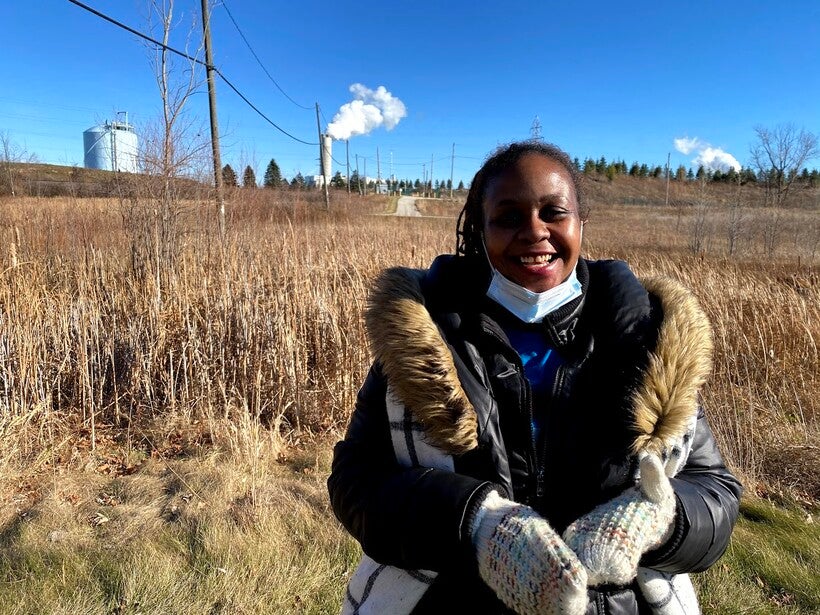 Dana Kelley has been urging utilities like We Energies to transition away from fossil fuels in power generation.
Corri Hess/WPR

Among the actions Biden has pledged to take that can be carried out by executive order is rejoining the Paris climate agreement as soon as February. The United States exit from that agreement promised by President Donald Trump formally took effect the day after the election.

Greg Nemet, an energy researcher and professor of public affairs at University of Wisconsin-Madison, said Biden can accomplish a lot through executive orders.

"The downside is they're not durable if a new president comes in in four years or eight or 12 years and changes direction," said Nemet.

But Nemet said there may be room for common ground as congressional lawmakers weigh another stimulus to recover from the coronavirus pandemic.

During the Great Recession, the American Recovery and Reinvestment Act (ARRA) dedicated more than $90 billion to clean energy programs and technologies. The Obama administration found the stimulus supported 900,000 jobs from 2009 to 2015.

This February, researchers released a report that agreed the economic infusion had stimulated large numbers of jobs in renewable energy and energy efficiency sectors. A 2019 study by COWS projects the state could increase economic activity by around $14 billion and create 162,100 jobs by transitioning to in-state energy resources.

"There’s a lot more kind of basis for saying, 'Yeah, stimulus that has some greenness to it will save money and create a lot of employment,'" said Nemet. "Both of those things will be appealing to a lot of different parts."

In Wisconsin, Gov. Tony Evers set a goal for the state to consume carbon-free electricity by 2050 and created a task force that’s expected to release recommendations on addressing climate change soon.

"That national leadership can matter, and it can have a big difference…in kind of accelerating the pace of where Wisconsin's at," said Meyer Smith. "We have a long way to go."

Meyer Smith said science has shown policymakers and stakeholders need to act fast to address climate change. Climate scientists have warned greenhouse gas emissions would have to be cut nearly in half from 2010 levels in the next decade to avoid global warming of almost 3 degrees Fahrenheit. The use of coal to generate electricity would have to decline to next to nothing, while renewable energy would have to increase significantly.

By 2026, coal is expected to generate 40 percent of the state's electricity. Solar is expected to generate a little more than 4 percent by 2026 based on information submitted to the Public Service Commission earlier this year. Since then, utilities like Alliant Energy and WEC Energy Group have announced plans to expand solar investments and shut down coal plants.

Wisconsin is projected to warm as much as 4 to 8 degrees Fahrenheit by mid-century, according to the Wisconsin Initiative on Climate Change Impacts. The range of temperature changes depends on the degree to which greenhouse gas emissions are reduced, said Steve Vavrus, the initiative’s co-director and senior scientist with the Nelson Institute Center for Climatic Research at UW-Madison.

He noted the last decade has been the wettest on record since record-keeping began in 1895.

Meyer Smith points to flooding and storms across the state in recent years that have caused hundreds of millions of dollars in damage to roads, homes and businesses.

"All the economic devastation that flooding has done (is) largely linked to climate change," said Meyer Smith. 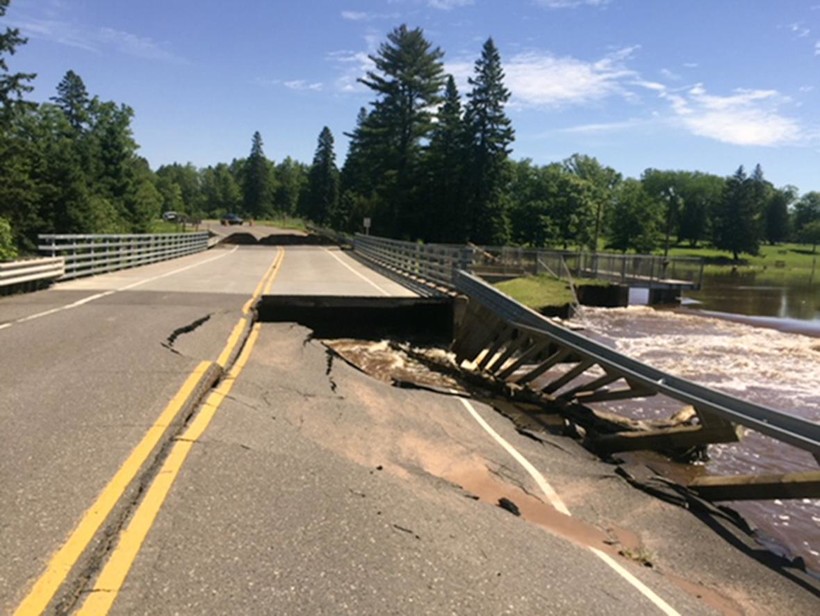 Economics is already playing a key role in clean energy investment, with markets accelerating a transition away from fossil fuels in the power sector as coal becomes more expensive to operate. Xcel Energy, one of Wisconsin’s largest investor-owned utilities, was the first major utility in the nation to announce plans to go carbon-neutral by 2050.

The utility plans to retire all coal plants in the Upper Midwest and replace them with renewable energy resources and natural gas, which is expected to reduce Xcel’s carbon emissions 80 percent by 2030. Beyond that, the utility will be relying on development of new technologies to reach net-zero emission, said Frank Prager, Xcel’s senior vice president of strategy and planning.

"The kinds of things that are going to help us enable an affordable and reliable and fully clean energy system, a lot of those things don't exist now. In fact, none of them do," Prager said. "That's why the value of Congress and the administration focusing on technology advancement is going to be really, really important going forward."

A majority of Americans, including more than half of Republicans, say they would support initiatives to address climate change. Proposals like providing tax incentives for businesses that use carbon capture technology to prevent the release of carbon emissions have received broad bipartisan support, according to Rolf Nordstrom, the CEO and president of the Great Plains Institute. He said Wisconsin and the Midwest are uniquely positioned to lead on that front.

"Both capturing carbon in land practices like in agriculture, things like no-till farming and cover crops, and the way we do forestry, all the way to direct air capture, which we have companies doing," said Nordstrom.

Some Wisconsin conservatives agree the state should examine new technologies and how Wisconsin may benefit from a clean energy transition.

Executive Director Scott Coenen with the Wisconsin Conservative Energy Forum admits he’s been arguing against wind and solar for the last decade.

"However, in the last five years, both wind and solar have changed fundamentally as technologies. They've come down in cost dramatically in the last decade. Utility scale solar is 100 times cheaper than it was 10 years ago," said Coenen. "That puts it in a fundamentally competitive place in the marketplace."

He thinks there’s room for common ground to help utilities transition away from aging coal plants into renewable resources. Consumer advocates have voiced concerns over ratepayers paying twice as utilities may raise rates to pay off investments in coal plants that are now uneconomical while investing in renewable energy like wind and solar.

Coenen also sees an opportunity to invest in renewable energy and electric vehicle infrastructure to help stimulate the economy as part of any future coronavirus relief package.

Even so, utilities like Xcel say the industry is transforming regardless of the political climate or changing administrations.

Wisconsin’s largest utility company, WEC Energy Group, recently announced it would retire the South Oak Creek coal plant as part of a plan to retire 1,800 megawatts of fossil fuel generation and invest $2 billion in renewable resources in the next five years.

A WEC Energy Group spokesperson said the utility is committed to working with state and federal leaders, as well as environmental groups and customers, in the transition to a safe and affordable clean energy future.

Standing in the shadow of the plant, Dana Kelley said she’s excited to witness the transformation.

After a bout with COVID-19 this spring, Kelley said she's even more driven to push for cleaner air, especially for communities of color.