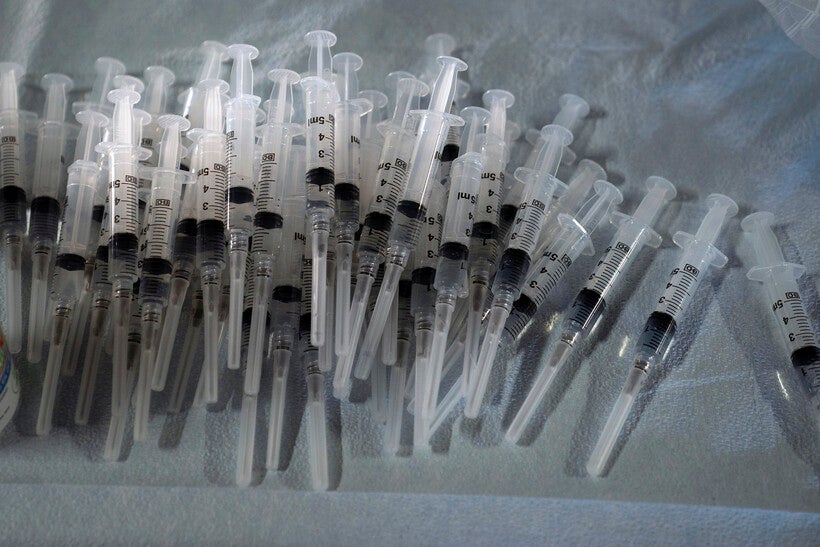 Syringes prepared with Pfizer's COVID-19 vaccine are seen at a vaccination site in Long Beach, Calif., Friday, March 5, 2021. More than 27 million Americans fully vaccinated against the coronavirus will have to keep waiting for guidance from U.S. health officials for what they should and shouldn't do. Jae C. Hong/AP Photos

Similar Arguments Against Vaccines Have Been Recycled Since The Smallpox Epidemics
By Elizabeth Dohms-Harter
Share:

Anti-vaccination sentiment is on repeat in this era of COVID-19, as misinformation about unsafe vaccines and mutated DNA is recycled from vaccination and inoculation campaigns that date back to smallpox.

Smallpox was eradicated from the population in 1979. But prior to that, it showed up in waves since its estimated arrival in about 10,000 B.C. With up to a 30 percent mortality rate, smallpox would show up on the faces of those infected and would often leave disfiguring scars.

René Najera, an epidemiologist and editor of The History of Vaccines project by the College of Physicians of Philadelphia, said inoculations prior to the vaccine — whereby pus or scabs from an infected person were injected or inhaled into the body of a healthy person — weren't widely accepted.

In fact, in Boston a prominent minister who learned of inoculation from his slave, Onesimus, and advocated for widespread inoculation, was attacked.

"His house was firebombed, (he and a physician he worked with) were raked through the mud in the press and in public opinion," Najera said.

By the time a smallpox vaccine was introduced in 1796, misinformation abounded again about its efficacy and safety.

"It's going to turn you into a cow because they're taking the cow puss and giving that to you," Najera said, repeating some of the misinformation that was passed around about the smallpox vaccine. "It's going to make you have stillbirths because look at how many cows have stillbirths after getting cowpox, etc."

Now, centuries later, Najera said the same kind of misinformation is being peddled about the COVID-19 vaccine, particularly that it's going to damage DNA, cause mutations, cause cancer or cause abnormalities in an unborn fetus.

"That's where we get into the realm of unhealthy skepticism," he said.

The first documented anti-vaccine group called the National Anti-Vaccination League appeared in 1866 after Britain's government tried to mandate smallpox vaccinations for its constituents.

All sorts of messaging emerged from the group, including religious stances arguing that getting sick is part of God's plan, and libertarian points of view that proclaimed the government can't tell individuals what to do.

Later, a similar anti-vaccination league appeared in Boston that distributed misinformation about the vaccine by mail and solicited donations, Najera said.

Skepticism and frustrations over vaccine mandates eventually led to a U.S. Supreme Court decision in 1905. Bostonian Henning Jacobson refused to get vaccinated and to pay a fine that was imposed on him as a result. He argued getting vaccinated was against his rights, but in Jacobson v Massachusetts, the court determined that the local Board of Public Health had the authority to issue vaccine mandates.

"It sets a precedent," Najera said of the early 20th century case. "We end up with what we see now at play in the COVID pandemic: local and state governments having much more authority, much more of the power to institute public health guidances and mandates than the federal government."

There are currently no state or federal mandates to get the COVID-19 vaccine, Najera said. And what history has shown is that mandates for such vaccines tend to fall out of favor according to age, he said.

Najera said that when Massachusetts mandated the smallpox vaccine for schoolchildren, it was pretty well accepted.

"And that's been the case with many of the childhood diseases for the most part," he said.

That's not the case with other vaccines.

One example of this, he said, is the opposition to a proposed mandate for the HPV vaccine in Texas for teenagers, which included misinformation campaigns designed to mislead the public about the effects.

The COVID-19 vaccine is the most recent example of this, he said.

"The people who are being affected the most are the elderly and people with chronic conditions," he said. "And for some reason, at a societal level...we don't care as much. (We say) 'You had a good life. Sorry this happened to you.' And so, that seems to play a lot into the acceptance of these things."

But mandates are complicated in a system such as the U.S., where public health has become politicized.

What's perhaps most effective in encouraging people to get the vaccine, Najera said, is peer conversations.

"People who have very ingrained beliefs listen to their peers and will act accordingly to whatever their peers are influencing them to do," he said.

The History Of Anti-Vaccination Attitudes 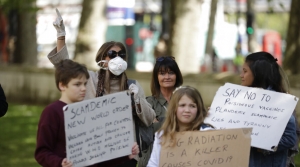 The first anti-vaccination movement came on the heels of the invention of the first vaccine -- which protected against smallpox -- in the early 1800s. Amid the mass COVID-19 vaccination campaign in the U.S. and the hope to prevent another surge, we look at the long history of anti-vaccine sentiment.