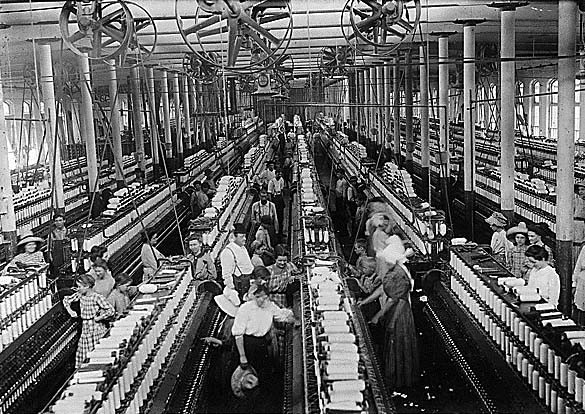 Working conditions in the early years of the twentieth century did not allow for safe or leisurely meals. Image by National Archives and Records Administration.

Historian: Industrial Revolution Gave Us Lunch As We Know It

Like the Sun overhead in the sky, lunchtime might seem like a immutable part of everyone's day, but a food historian said that meals and the practices associated with them can be viewed as a reflection of an evolving society.

Whether eating a sandwich from a lunch bag, microwaving some leftovers or grabbing grub at a local restaurant, the way that most people eat lunch today, the foods they choose and who they eat it with has changed over time, particularly in the last 200 years.

Abigail Carroll is an author and food historian who has taught in the Gastronomy Program at Boston University. In her book “Three Squares: The Invention of the American Meal,” Carroll explains that that of all the historical and cultural factors that have shaped how and what people eat, business is at the top of the list.

Carroll said one of the largest business impacts was the Industrial Revolution, which she said “really upended people’s schedules and their lives.” Not only were people moving from rural areas to live in urban centers, but the place where they did their work shifted from a home or farm to a factory, she said.

Lunch in particular was shaped by labor developments and patterns in the late 19th Century. Historically, Carroll explained, “‘lunch” was once used interchangeably to mean a small meal or a snack.”

In some ways, it didn’t evolve much from that originally meaning, she said, even with the changing cultural landscape.

“It was not a very important meal. (It) didn’t have to be hot, it didn’t have to be fancy, it could be very spontaneous. And you could eat it alone. There was no pressure to eat it with other people,” she said.

Carroll added that lunch “didn’t have to do the cultural work that dinner was doing.” That is, serving as a time for families to gather together and for a substantial and satisfying meal to be shared.

Because laborers were living farther away from where they worked, people were no longer able to get home to eat their midday meal. That meal had traditionally been the most substantial meal of the day and served hot, but that tradition changed to fit a factory worker’s schedule.

As a result, it became necessary to either buy a lunch near their place of work or to bring lunch with them. But for people working in a factory setting, there were many challenges to eating safely.

Without a designated lunch area, hazardous materials and working conditions made eating the midday meal dangerous for many workers. Carroll pointed especially to metal factories.

“People were literally eating the meals that they brought with them at their workshop desks. And sometimes they even reported that they didn’t even wash their hands because it would take such an effort … that it would take up a third of their lunch break,” she said.

In response, government regulators got involved and lunchrooms were developed. First, they were just separate rooms with no amenities. Then, there was a move to provide hot drinks like coffee.

Workers who brought their lunches to work usually ate cold food, often leftover pie or bread with meat or cheese. These provisions were carried in a tin pail, which came to be seen first as a mark of being lower class and then, as a symbol of pride in being a productive laborer.

“Eventually,” Carroll said, “if you were a professional, in an urban area, you might be dining at a fine dining club.”

Divided by trade, these clubs offered men of a certain standing to eat with their peers, and to make valuable connections at the same time.

Women weren't particularly welcome in the men’s lunch clubs, but might not have wanted to patronize them anyway. Carroll explained that when women’s lunch clubs developed, they were “not as prestigious as men’s lunch clubs. Most of the women’s lunch clubs actually started out as charities. It was for that smaller number of women who were working, who perhaps wouldn’t feel comfortable at a lunch room in a factory because it was mostly men.”

Carroll said little has changed since then, but examining eating habits is still an important way to examine a culture and society.

“Food is an amazingly fertile window into culture,” Carroll said, “but it’s one that we just take for granted and we overlook. And it’s just embodied with so many meanings.”