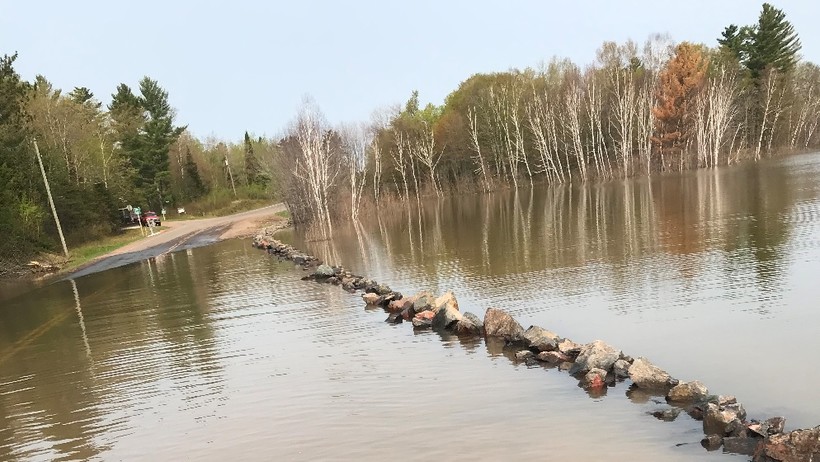 County Road N near Pigeon Lake is closed after high water has flooded the road again. Last fall, the county raised the road 2.5 feet due to flooding. Courtesy of Bayfield County

Trish Bantle of Durand has been coming to Pigeon Lake in Bayfield County every year since she was 8 years old. She grew up camping there and spent her honeymoon by the lake. Now, the lake she’s longed to be near for so many years has come too close for comfort as rising water levels are an ever-encroaching source of misery for property owners.

"My cabin’s OK right now, but a lot of the neighbors are facing water in their basements or just total inaccessibility to their cabins or their homes," Bantle said. "We have a 90-year-old (woman) down the road from us, and she was sleeping in a chair so she could pump her basement every four hours."

She said the problem first became noticeable last June during Father’s Day weekend when as much as 15 inches of rain was reported from June 15 to 17. Heavy rains caused flooding that prompted a federal disaster declaration for six northern Wisconsin counties. As the waters receded, the area surrounding the 200-acre Pigeon Lake saw little, if any, relief. The lake repeatedly swamped a nearby road, causing long detours and multiple efforts to raise the roadway.

Wet weather and flooding in the past year have caused similar challenges for lakes across the state, said Mike Engleson, executive director of the Wisconsin Lakes Association.

"About a decade ago, we were in a period where water levels were very low across the state," said Engleson. "But, with the increase in storms and heavy rainfalls, we’ve certainly seen this developing more and more where water levels are going up again and they’re creating problems."

Engleson said lake levels across the state are so high that it’s creating the potential for property damage and safety issues with some lake associations putting in slow, no-wake rules for boats.

The spring snowmelt exacerbated high water levels along rivers and lakes in the wake of flooding that took place last summer across northern and southern Wisconsin, said Michelle Staff, floodplain management policy coordinator with the Wisconsin Department of Natural Resources.

High water has prompted conversations about lowering levels on some lakes to prevent flooding, including the Yahara chain of lakes. A report released in February found a mix of strategies there, including dredging and pumping, would be the most effective to mitigate flood risks.

Staff noted areas like Rock, Dane and Columbia counties are among those seeing problems similar to Bayfield County, particularly on water bodies known as seepage lakes that are the most common lake in Wisconsin.

"There are these types of systems where they’re kind of a closed area where there’s wetlands or there’s no outlets to the lakes or the outlet is very small but the wetland can’t hold any more water," Staff said.

Water levels on the 525-acre Crystal Lake in Dane and Columbia counties have risen from the maximum depth of 9 feet to 14.5 feet, said Dave Padley with the Fish, Crystal and Mud Lake Rehabilitation District.

A nearby campground that is the largest source of funding for the lake district’s $80,000 annual budget lost around 100 trailers due to the snowmelt this spring, said Padley.

About a decade ago, the lake district received a roughly $740,000 grant to install a permanent pump into Crystal Lake to divert rising water into the Wisconsin River through Roxbury Creek. However, they must meet water quality limits on the amount of phosphorus and suspended solids in their water under a state permit in order to send it elsewhere. Padley expects they’ll have to stop pumping completely in August and September as warming temperatures impact water quality.

Padley said pumps have been running 24/7 on Crystal Lake and nearby Fish Lake. Now, the district is examining whether to upgrade to another pump system that can drain water faster, but the improvement comes with a $150,000 price tag that members may not be able to afford.

"Even if we did that, would it be enough?" he asked.

High water levels also prompted the town of Roxbury to close Mussen Road between Crystal Lake and Fish Lake more than two months ago, said town chairman Ervin Breunig. Now, there’s about 3 to 4 inches of water over parts of nearby Fish Lake Road. He said they’ve spent more than $100,000 on raising roads in the past. He and property owners are growing more and more frustrated.

"When they built their houses, they were 60 to 70 feet off the lake. Now, they’re in the lake," he said. "They’ve got sandbags around them, and they’re still sandbagging now, hoping to save their homes."

In the past, homes surrounding Fish Lake have been offered buyouts that have been repeatedly flooded. Padley said the county is hoping to offer buyouts to more homes there.

The DNR’s Staff said there are state and federal grant programs that can help property owners address flooding, but they require matching funds that some communities don’t have available.

Wisconsin Emergency Management provides federal funding through the Hazard Mitigation Grant Program that will pay for 75 percent of the cost to purchase flood-prone homes after a federal disaster declaration. State and local governments split the remaining share. But, Staff said, there are more properties than funding available.

Wisconsin Emergency Management received $15.9 million in applications last fall. There were 20 counties who submitted applications for buyouts of more than 140 homes, said WEM spokeswoman Lori Getter. She said the agency estimates it will receive $11.7 million from the federal government for the grant program. One of the agency's top priorities is buying out homes with repeated flood damage.

"We want to get those homes out of those areas that continuously flood so those homes can be razed and that area can become a green space," said Getter.

But only primary residences — not cabins or secondary homes — qualify for funding. Getter added the process can take up to two years to buy homes while some people must seek housing elsewhere. Over the last 15 years, she said more than 500 homes have been purchased through hazard mitigation funding. Flooding last August in areas like Dane, Vernon and Crawford counties caused significant damage to residences.

"They saw flood heights 4 feet above the 1 percent chance or the 100-year flooding event," said Staff. "So, as you can imagine, there’s a lot of flooded properties."

Both Getter and Staff urged people to protect their properties by buying flood insurance.

While insurance may save some the financial fallout in the future, people are still grappling now with rising water levels.

"Is there a solution? I don’t know," said Bantle. "Make it stop raining."