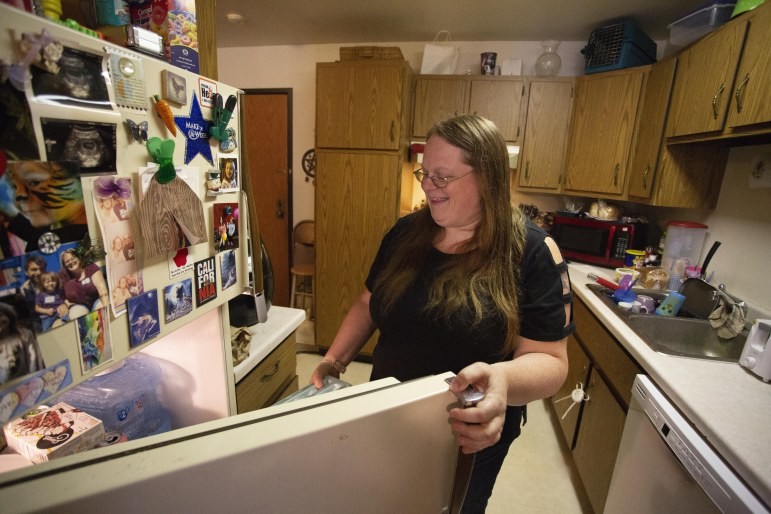 Molly Rodela, of Manitowoc, Wis., prepares dinner in her apartment. Rodela and her husband, Hector, have an accepted offer on a house in Manitowoc that was $20,000 more than the owner’s asking price. Offers over the asking price have become commonplace in a housing market that is marked by tight supply and growing demand. Gary C. Klein/Sheboygan Press

Owning A House Is A Lifelong Dream For Many. But That Dream Is Increasingly Out Of Reach In The Fox Cities As Prices Rise And The Housing Stock Remains Small.
By Jeff Bollier and Natalie Brophy | USA TODAY NETWORK-Wisconsin
Share:

Molly Rodela can’t wait to leave the two-bedroom Manitowoc apartment she, her husband, Hector, and their daughters have shared for more than five years.

The couple searched for years for a bigger place to raise their kids, ages 9 and 5, but they were not approved for a mortgage loan when they first started house-hunting in 2016. Meanwhile, the high price of rentals continued to keep the family in the cramped apartment.

After working hard to improve their finances, the couple earlier this year restarted their house search.

They knew that finding options within their modest budget would be tough during a market frenzy. The story behind how they got their three-bedroom, two-bathroom Manitowoc home illustrates those challenges.

Rodela said she saw their future home online and immediately contacted her real estate agent. She visited the house the same day and liked it so much that she and Hector agreed that night to offer $130,000 — $20,000 over the asking price.

Less than 24 hours later, on May 18, they learned that the seller had accepted.

"For the first week after (our real estate agent) told us, I couldn’t even sleep," Rodela said. "Oh my gosh, it’s such a relief."

Northeastern Wisconsin’s competitive housing market and the sluggish pace of new housing development have frustrated first-time homebuyers for years. It has only worsened in the past year, with median sales prices hitting new records.

Meanwhile, more older homeowners are aging in place, depriving the market of a traditional source of more affordable homes. And some families are pursuing renovations or expansion while avoiding the hot market, further limiting housing supplies.

When house hunters do try to buy, the market’s furious pace forces them to make sometimes risky offers. Rising prices can lock out renters who struggle to afford rent and basic necessities, leaving them unable to save much money for a down payment.

Those struggles, combined with record-setting median home prices and stagnant wages, have increasingly put homeownership — long a cornerstone of the American Dream — out of reach for working families in northeastern Wisconsin.

Discouraged buyers may wonder where all the competition is coming from.

"Everyone wants the easy answer to why we have a housing crisis. That does not exist," said Alex Young, a real estate agent with Keller Williams who works in both Brown and Outagamie counties. "So many things are happening at once." 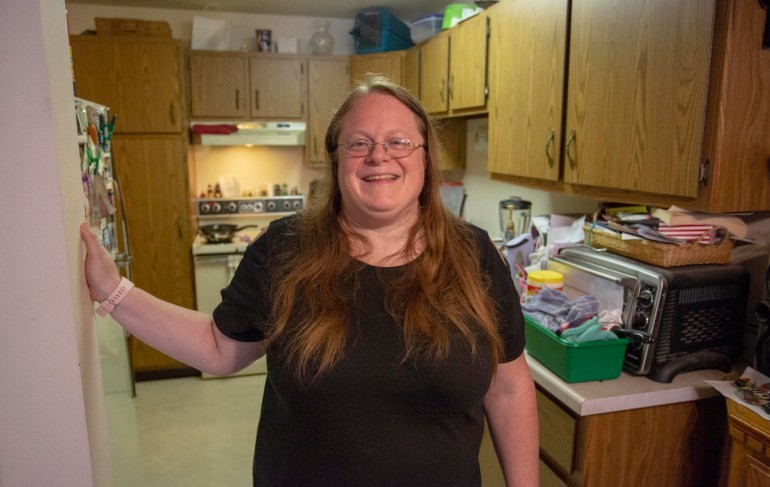 Molly Rodela smiles knowing that she will be leaving the struggles of her current small kitchen when she moves to a home that she bought recently, Tuesday, June 8, 2021, in Manitowoc, Wis. Rodela said they had to offer over the asking price to be in the running for the property. Gary C. Klein/Sheboygan Press

The housing market crash in the late 2000s sent shock waves across the housing industry that still impact the market today. Builders and developers shut down and never returned, while skilled laborers sought other work. Financing the early stages of subdivision development became harder, reducing opportunities to build new homes and apartments.

The pace at which communities are adding new subdivision lots and building new homes and apartment buildings still has not recovered, the Wisconsin Realtors Association found in a 2019 report.

Single-family home construction permits in Wisconsin hovered between 20,000 and 25,000 units a year from the mid-1990s until the market’s peak in 2003, when builders started work on more than 30,000 new homes, according to U.S. Census Bureau data. In 2019, though, only 8,719 single-family building permits were issued, down 71 percent from that peak.

So even as existing home sales in northeastern Wisconsin have recovered and topped 16,000 in 2020, double the pace of the industry's pre-collapse peak, the lack of new construction means surging prices and fierce competition.

Meanwhile, new lots created by subdivision development in Wisconsin are dramatically lagging behind peaks seen before the market’s collapse.

The slow pace of recovery has left the Green Bay area, for example, with an undersupply of apartments and homes affordable to families that earn less than the area’s median income. To meet the need, the Brown County region will need to add, in each year through 2040, up to 170 rental units with rent under $1,000 and 75 homes priced below $158,000, a city housing market study found.

In April, the Wisconsin Realtors Association noted, northeastern Wisconsin had 2.6 months of inventory based on the current pace of sales and listings. One year ago, it was almost four months. Statewide, the inventory of homes for sale for less than $200,000, a range generally affordable to lower income families, is 2.1 months.

Inventories began falling at the end of 2019. Then the coronavirus pandemic hit in March 2020, just as the home-selling season would normally ramp up in Wisconsin. Inventory dried up.

"What we found was that there (were fewer) sellers that were up for selling, but none of the buyers went away," Diersen said.

The result, Diersen said, is today’s market in which sellers can get 20 or more offers for a home.

Those buyers all know they have to offer more money and accept unusual conditions on their offers, like waiving an inspection, in the hopes it will improve their chances.

These conditions have sent median purchase prices soaring in northeastern Wisconsin to $192,500 through the first four months of 2021, up more than 37 percent from five years ago, according to Wisconsin Realtors Association data.

One bright spot for prospective homeowners is also fueling demand: Interest rates have remained around 3 percent, sometimes lower, on a 30-year fixed rate mortgage, allowing buyers to offer more for a home without pushing their monthly payment higher than they can afford.

Chris Boland, vice president of consumer lending manager at North Shore Bank, said buyers should be wary of getting too aggressive.

"Educate yourself. Know what you can buy," Boland said. "If you can’t afford to do anything else, you won’t have the satisfaction of the American Dream."

Building Costs Have Gone Way Up

Another complication for affordable housing construction: the rising cost of materials including lumber, manufacturers’ struggles to meet demand for appliances, siding and other key materials, and rising labor costs amid a skilled worker shortage.

The recent spike in lumber prices alone has added $24,000 to the cost to build a new home, the National Association of Homebuilders reported in March.

A family in Green Bay or Appleton would have to earn the region’s median income, about $80,000 per year, to afford a $300,000 home under a federal guideline that ties affordability to paying no more than 30 percent of household income. That makes new construction unaffordable for about roughly two-thirds of all households in Green Bay and Appleton. This house is being built by NeighborWorks Green Bay on the west side of Green Bay, Wis. New home construction is down in northeast Wisconsin, adding to the lack of affordable housing in the region. Samantha Madar/Green Bay Press-Gazette

The coronavirus shut down Greater Green Bay Habitat for Humanity's plans to build several new homes for low-income families last year with the help of $15,000 per home in city assistance. This month, it had to ask the city’s Redevelopment Authority for another $8,500 per unit due to increased material and labor costs.

"Our cost to build the same home we built a year ago is about 35 percent more expensive," said John Weyenberg, CEO of Fox Cities Habitat for Humanity.

Families like the Rodelas represent just one segment of the competition.

Buyers can also include landlords and property management companies, and investors looking to rent the property on short-term rental sites like Airbnb or VRBO.

In Green Bay, about 65 residential properties have received short-term rental permits to rent to visitors staying for fewer than 28 days. Across Brown County, there are more than 200, with many concentrated in the residential areas surrounding Lambeau Field. In Green Bay, the figures do not include properties where the occupant rents out a spare room.

Additionally, local buyers are competing against out-of-state buyers drawn to the region by its relatively low cost of living compared to major metro areas, high quality of life and an ability to work remotely from anywhere.

Casey Franklin and Desiree Godinez of Denver, Colorado, recently bought a home in Green Bay to be closer to family in Wisconsin. They previously searched for a first home in competitive Denver, but shifted focus to Wisconsin when they transitioned to remote work during the pandemic. They took virtual tours of houses and put in an offer in late March.

"We knew the houses would be less expensive. We would get more bang for our buck, which was big for us," Franklin said.

The Rodelas overcame all of the challenges; they will move into their new home in July. The Manitowoc house has everything the family was looking for — three bedrooms, a yard for the kids to play in, a two-car garage and plenty of room for entertaining. The kitchen and two full bathrooms have been recently updated. The house is also less than a block from their daughters’ school.

Rodela tears up as she describes the feeling of joy and relief she feels at finally owning a home.

"I grew up in a home, and I did not want my kids to grow up living in an apartment for their whole life, where we can’t ever hang up what we really want on the walls or we can’t really decorate how we want or we don’t have a yard that they can play in ever, like we have to go somewhere else to for them to play outside. I can't even begin to tell how much it means to me," she said.