For the 14th consecutive day, Black Lives Matter protesters are out in Wisconsin marching against the killing of George Floyd, a 46-year-old black man who died while in police custody in Minneapolis late last month.

Groups are demonstrating Thursday in places like Milwaukee and La Crosse demanding reforms that include more community control over law enforcement and shifts in funding from police to public health efforts.

Members of Wisconsin's congressional delegation have spoken up about the push for police reform that's sweeping much of the nation. That includes Republican U.S. Rep. Jim Sensenbrenner — who in a surprise move — sided with Democrats Wednesday on creating a national registry of "bad cops."

Here's a roundup of what Wisconsin's members of Congress has said on the topic of protest and police reform:

Republican U.S. Sen. Ron Johnson told Wispolitics.com Thursday that he and his party colleagues are concerned about the events surrounding Floyd’s death.

"I think America uniformly was shocked by that and wants to see justice done," he said.

It’s clear reforms need to be made, but they will come largely at state and local levels, Johnson said. He said he's been briefed on the workings of a Senate Republican task force on police reform, led by U.S. Sen. Tim Scott of South Carolina.

"There hopefully will be some broad bipartisan support on things the federal government can do, within its proper constitutional framework, to encourage better, less discriminatory policing powers," he said.

"Hopefully, you know, the president talking that way will put a little spine in some of these governors that aren't calling out the National Guard to the extent that they need to to restore order," he said.

Baldwin is a cosponsor of the Justice in Policing Act of 2020. The legislation would reform policies that protect officers from facing civil lawsuits and hold them accountable when excessive force is used. It would also ban choke holds, create a registry that tracks the disciplinary records of police officers and require federal officers to wear body cameras.

Last week, Baldwin was among a group of senators who spoke out against Trump's threat to use active military troops to suppress protests. She co-sponsored a bill that would limit the president's authority to deploy the military under the Insurrection Act.

"We cannot allow President Trump to weaponize our military and use active duty troops to violate the constitutional rights of peaceful protesters working to bring about the change our nation desperately needs," she said in a statement.

"A lot of the police union activity that we have seen is to protect bad cops," he said. 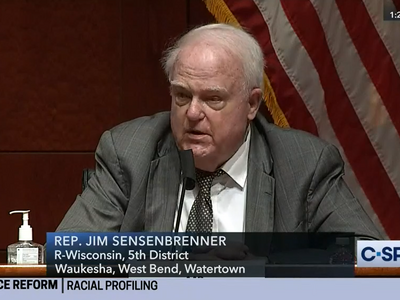 Police unions will need to work with communities to get rid of bad cops, he said, noting the officer who killed Floyd had multiple allegations of misconduct made against him.

“Why was he still on the force?” Sensenbrenner asked.

Sensenbrenner told his colleagues that watching Floyd’s "brutal murder" made him sick. Directly addressing Floyd's brother, Philonise Floyd, he said it’s up to lawmakers to "constructively" address the issue of police brutality.

Sensenbrenner doesn't support defunding the police — a demand that’s been made at protests across the country — because "99 percent" of officers are making their communities safer, he said. He said he doesn’t believe those officers should suffer pay cuts or be put at additional risk because of lack of funding.

Moore is a member of the Congressional Black Caucus, which spearheaded the introduction of the Justice in Policing Act. She’s one of its cosponsors in the House of Representatives.

But reforms need to extend beyond law enforcement to make a more just society, especially with the economic crisis facing the nation, Moore said Wednesday on a call hosted by the Democratic National Committee.

"People of color really are being caught on the brunt of this economic meltdown, really mirroring the Depression era," she said. "Certainly, with unemployment among African Americans and those folks of Latinx origin being something at like 20 percent, that is not something to be celebrating at all."

People of color often face a lack of health care, educational opportunities and employment options, she said. Those factors can result in outcomes that police are too often left to deal with, she said.

Republican U.S. Rep. Glenn Grothman said he isn't opposed to police reform. In 2007, he introduced a bill as a member of the state Legislature that would have made it easier to fire police officers, he said, noting it didn't receive much support.

Grothman said he'd support a bill similar to the one he introduced, but he doesn’t support the Justice in Policing Act. In fact, he believes the bill would be "a disaster."

"I think a timid police department, which is what this bill would result in, is only going to result in more lost lives, particularly in the minority community," he said.

"I’m a little bit appalled that Black Lives Matter doesn’t spend more time addressing the high homicide rates in our big cities that are not caused by police," he said. "It makes you wonder about their sincerity."

Democratic U.S. Rep. Mark Pocan signed on as a cosponsor for the Justice in Policing Act.

"The police violence we’ve seen in the past month is tolerated long before it is called out, and the people of this country are fed up with systemic racial injustice constantly being met with inaction," he said in a statement.

Pocan took to social media earlier this week to call out a tweet in which Trump suggested 75-year-old Buffalo protestor Martin Gugino, who was injured by police during a protest, could have been an ANTIFA provocateur.

"It doesn't matter if he's 75 or 25, that's not how police should treat protesters," Pocan wrote on Facebook, adding that the president’s tweet "enables police violence."

In a statement, Republican U.S. Rep. Bryan Steil said those responsible for Floyd’s death should be "prosecuted to the fullest extent of the law."

"As we move forward, addressing racial prejudice begins with the simple acts of earnestly listening to one another and being willing to engage in thoughtful dialogue about how to improve our communities," Steil said. "I am committed to working with everyone to seek solutions to make our communities stronger and more inclusive."

Most police officers work hard to keep their communities safe, Steil said, adding that he’ll listen to concerns from both local law enforcement and leaders of the African American community as Congress addresses the issues of police reform and retraining.

Republican U.S. Rep. Mike Gallagher, of Green Bay, told the Green Bay Press Gazette this week that he supports some of the provisions in the Justice in Policing Act, including limiting the use of choke holds.

"Anytime we can get upstream of the problem of crime, I'm for it, but that's not something that can be dictated with a one-size-fits-all solution from the federal government," he told the Green Bay Press Gazette.

On Twitter earlier this month, Gallagher said the officers responsible for Floyd’s death deserve to be held accountable, but he said the actions of a few don’t represent law enforcement as a whole.

"I support the efforts in the House — led by the Congressional Black Caucus — to invest in the sort of substantive reforms we need to see in the United States," he said in a statement.

He said he’s proud of the peaceful protests that have been going on in western Wisconsin.