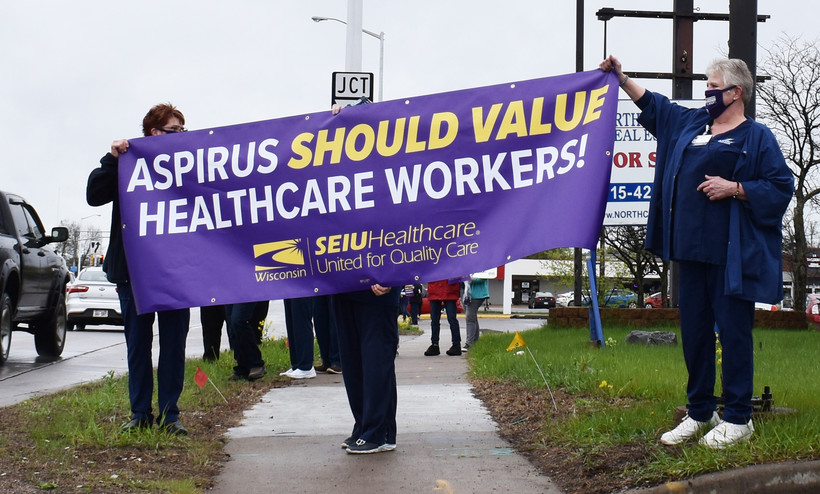 Hospital workers in Wisconsin Rapids say they deserve higher wages in the wake of the pandemic. They're the latest group of health care employees to clash with management in Wisconsin.

Ahead of a new round of contentious contract negotiations that restart Wednesday, a group of workers and supporters rallied at a busy intersection with signs urging the health system Aspirus, which owns Aspirus Riverview Hospital, to value its workers.

"We feel, being frontline workers, that they should be paying us a decent wage and respecting us, and sharing some of their wealth," said Carol Koeshall, a cook for the hospital who is a member of the Service Employees International Union.

Koeshall, who is 61, said she was fortunate in that her seniority at the hospital protected her from losing work hours early in the pandemic when many others saw their hours, and therefore their take-home pay, cut. She said the hospital's patient count is higher now than it was before the pandemic, and workers are "exhausted." 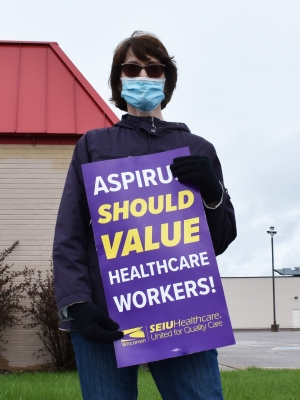 Koeshall and others at the outdoor rally on Monday afternoon said Aspirus should offer more than a 1 percent raise to workers. (In 2017, the Wisconsin Rapids Daily Tribune reported workers' two-year contract included a 4 percent wage hike). They also said the company should drop proposals to increase the amount employees pay for Aspirus health insurance and eliminate the Christmas Eve holiday for workers. Several expressed frustration at their low wages compared to the high salaries of some executives.

"I've been there just under 29 years and make $15.89 an hour," said Sarah Von Loh, a cleaner at the hospital. "That's pretty pathetic. We just want a decent, living wage."

In a statement, Aspirus declined to comment on negotiations, but said the company values all its team members.

"We have enjoyed positive relationships with all our union partners, and look forward to continuing to negotiate in good faith with SEIU leaders and a federal mediator," the statement said.

Negotiations at Riverview have been going on since October. It's not the only hospital in Wisconsin where unions and workers groups have been calling for higher pay, better benefits and a voice for employees in company decisions.

Nurses at Madison's UW Hospital have been trying to organize a union there since late 2019, without success. Some are supporting policy changes in Democratic Gov. Tony Evers' proposed budget that would make unionization efforts easier in Wisconsin; Republicans who control the legislature have rejected those proposals.

In 2020, the Milwaukee Journal Sentinel reported that a nurses union had asked major hospital systems in Wisconsin to offer paid time off to workers who had to quarantine due to COVID-19. Aurora, Ascension Wisconsin and Aspirus all rejected the proposal, requiring employees to use their vacation days instead. A March 2021 report from the Wisconsin Hospital Association found that up to a quarter of health systems' staff were quarantined during the state's fall spike in infections.

In March, nurses at UnityPoint Health-Meriter Hospital in Madison came to the brink of a strike before reaching a contract agreement. Union members had voted in early March to authorize a strike; they approved their new contract March 20.

The Wisconsin Hospital Association report also found that the health care workforce is drained and in some cases traumatized from working through the pandemic. Von Loh said she sees her work cleaning hospital rooms as essential to the health system's efforts to protect patients from infections. But she doesn't feel like it's valued that way.

"I'm in these patients' rooms daily," Von Loh said. "We worked right through COVID. ... We save lives every day, because without us, where would the diseases be?"

SEIU organizer Amy Dummer said she doesn't know what's going to happen when Riverview workers' negotiations restart on Wednesday. She didn't rule out the possibility that workers could choose to strike if no agreement can be reached.

"A strike is always the last option, but it's always on the table if it needs to be," Dummer said. 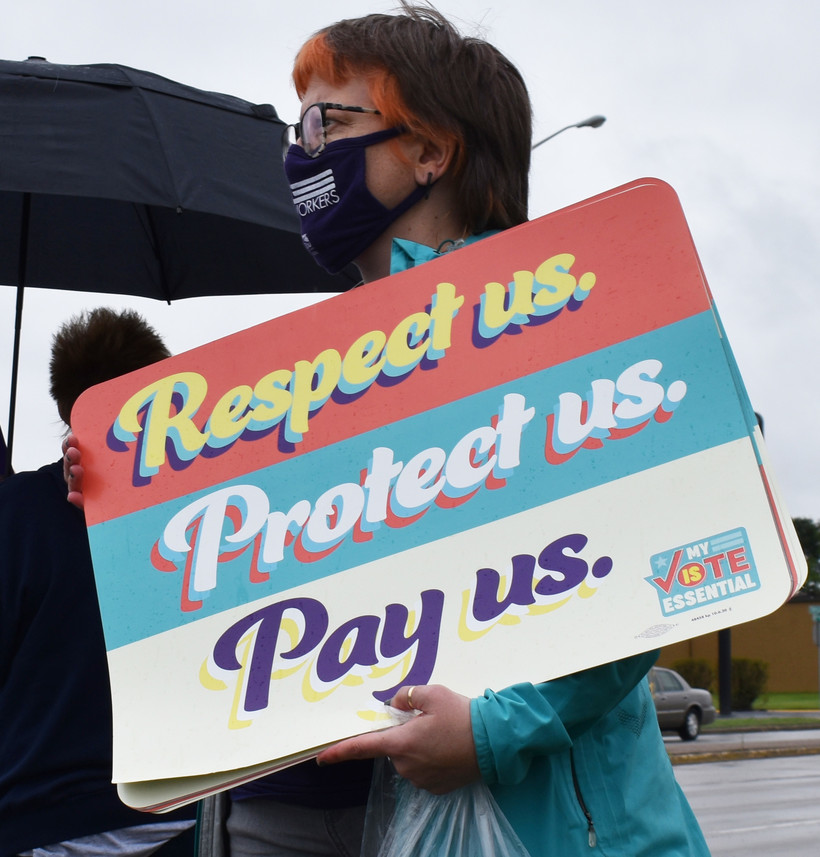