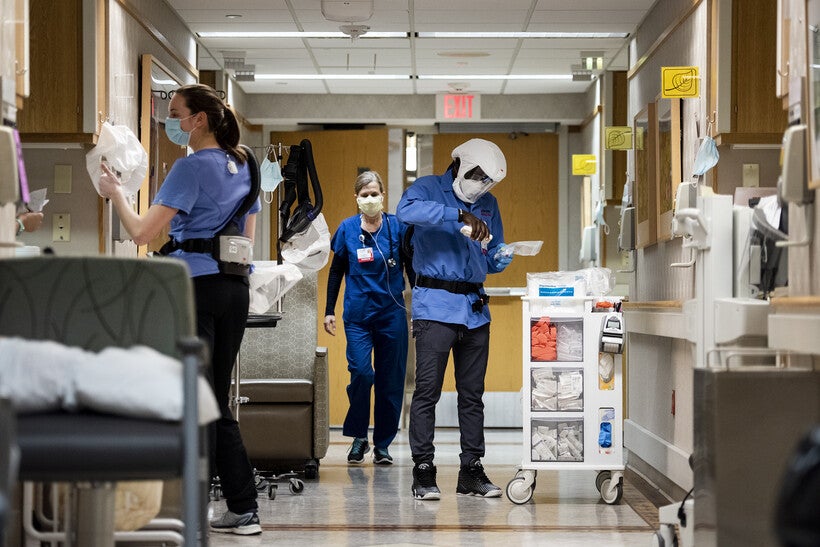 As hospitals across Wisconsin look at ways to grow and retain staff, they face longstanding issues like an aging population which requires more medical care. Hospitals are also in the midst of unpacking a new problem in the wake of the coronavirus pandemic: how should the nation prepare and respond to public health emergencies and where do hospitals fit in?

A new report from the Wisconsin Hospital Association released Wednesday found that as public health departments became overwhelmed during the pandemic, hospitals had to step in and play a bigger role — taking on the role of contact tracers and testing facilities.

"Health care providers became inundated with testing requests from their communities and requests for assistance from their overwhelmed public health partners," said the report, which noted local hospitals were often the only source of testing in rural communities.

Testing was initially limited early in the pandemic because of supply, an issue that also slowed early vaccination efforts. Wisconsin expanded access to testing by designating community sites across the state. A similar method has put Wisconsin ahead of many states in its vaccination efforts — as of Tuesday, 22 percent of people in Wisconsin had received at least one dose of the vaccine.

And while the vaccine offers a glimpse of hope, health care workers are still dealing with the fallout of a stressful year.

According to the report, in the fall of 2020 hospitals and health systems were reporting that up to a quarter of their staff were quarantined due to close contact with an individual infected with COVID-19 or were at home in isolation because they were infected with the virus.

Hospital staff were also dealing with an uptick in cases that left some patients vying for a bed. During a November surge, Mayo Clinic Health System in northwestern Wisconsin put hospital beds in the lobby and in the ambulance garage to accommodate an overflow of patients.

Rising to the challenge of working at a hospital during a pandemic has left the health care workforce "drained," the WHA report found. Long hours and a lack of the gear needed to keep workers safe has led to tense contract negotiations at some hospitals.

"Nurses have had to bear the brunt of this crisis," said Suzi Cossel, a registered nurse who works in the neonatal intensive care unit at UnityPoint-Meriter Hospital in Madison. "We have moral injury from the things we’ve had to do over the last year and really all we’re asking for is a voice at the table."

WHA’s report acknowledged there weren’t enough masks and other personal protective equipment for months after a pandemic was declared.

"Initially I think everyone didn’t know what was going to happen and the rules were to wear your mask indefinitely which many of us felt uncomfortable with for very scientific, well-educated reasons," Cossel said.

Service Employees International Union (SEIU), of which Cossel is a member, has voted to authorize a possible strike for March 24.