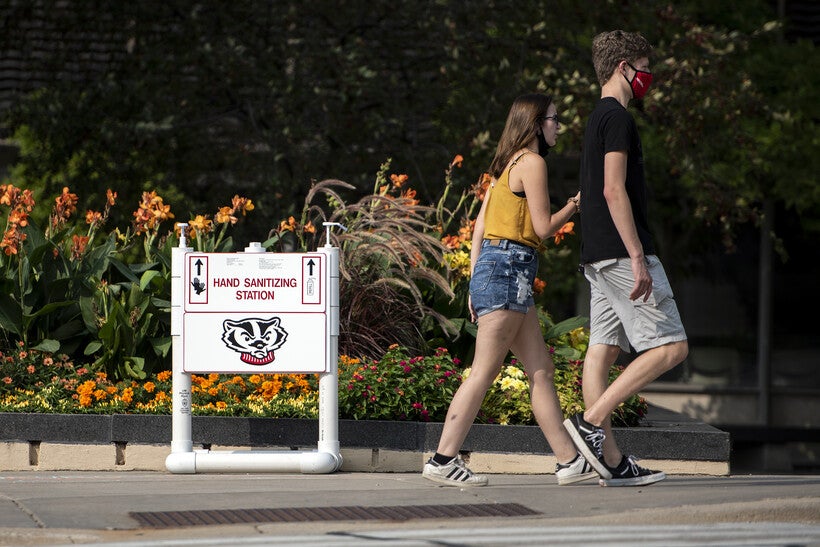 As leaders of Dane County and the University of Wisconsin-Madison spar over the role of college students in the rising levels of COVID-19 cases in the community, local health officials are reporting a lower percentage of positive cases linked to campus.

Public Health Madison & Dane County data shows 65 percent of all new cases in the last two weeks were linked to UW-Madison students and staff. That’s down from 76 percent last week.

Young people, ages 18 to 22 years old, continue to make up the majority of positive COVID-19 cases in Dane County.

But health officials say there's also a "significant" increase among those not affiliated with UW-Madison: From Sept. 8 to Monday, there were 29 cases linked to workplaces and 16 from health care facilities in addition to other sources, including apartments near campus, churches, other schools and weddings.

Local health officials are studying whether coronavirus cases on campus are linked to a recent rise in community spread.

"We are closely monitoring the data for evidence that the cases on campus have led to spread of virus off campus, outside UW students and staff. We cannot say at this point in time for sure that there is or isn’t spillover," said Janel Heinrich, director of Public Health Madison & Dane County, during a virtual press conference Thursday.

Meanwhile, a rise in coronavirus cases linked to UW-River Falls and K-12 schools has Pierce County describing the situation as a "tipping point" for the community.

In a press release Friday, Pierce County health officials said they are limiting outside gatherings to 25 people and 10 indoors. They are also asking businesses to cease delivery, and warning residents against all non-essential travel.

This week, both UW-Madison and UW-La Crosse announced they are resuming in-person classes after pausing due to a rapid rise in cases during the first weeks of the semester.

UW-La Crosse will go back to in-person instruction Oct. 5 after moving classes online and asking students to shelter in place last week due to a spike in cases in La Crosse County.

UW-Madison will start to resume some activity on campus Saturday.

The University of Wisconsin Badgers will kickoff their football season at Camp Randall on Oct. 24 against Illinois. There won’t be any fans in the stands, but Gov. Tony Evers is concerned there could be crowds nearby. The governor has supported the decision for university campuses to open and doesn’t disagree with a decision by the Big Ten to bring back football.

But during a press briefing Thursday, Evers expressed concerns the game might bring too many people together at a time health officials are urging people to stay at least 6 feet apart and avoid large gatherings.

Dane County has a public health order limiting gatherings to 10 people inside (not including employees) and 25 people outdoors.

The state is working with the university about controlling game-day crowds, he said.

"And we’re hopeful that the city of Madison will help us as it relates to making sure that people understand the importance of keeping those crowds small. But it is a huge issue," said Evers.

The focus on colleges comes as the state sees what the governor described as "unprecedented, near exponential growth" in the number of COVID-19 cases, recording the second-highest total of daily cases — 2,504 — Friday.

State data shows the number of infections among those age 18 to 24 years old is five times higher than any other group.