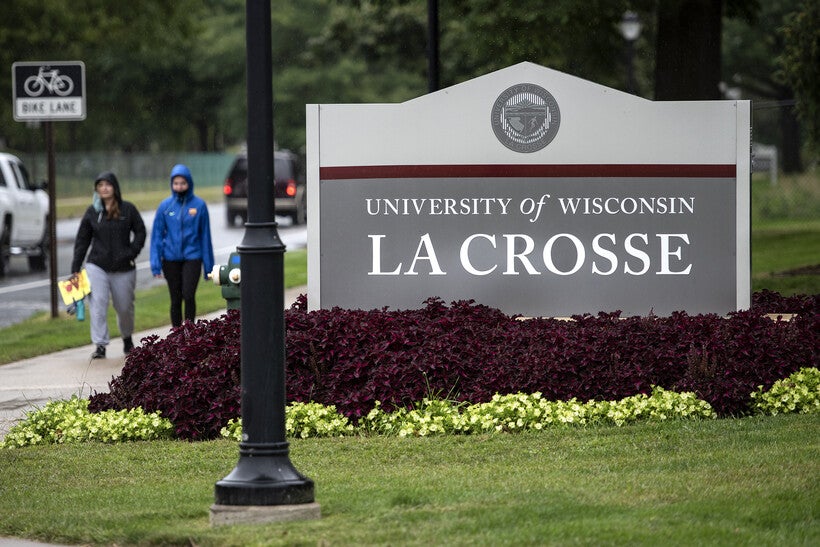 People walk on the sidewalk near UW-La Crosse on Friday, Sept. 11, 2020. Angela Major/WPR

Despite a rising number of COVID-19 cases in the community, University of Wisconsin-La Crosse leadership is preparing for students to return to campus.

The university moved to all online courses and asked students to shelter in place last week after a spike in coronavirus cases in La Crosse County.

During an online campus forum on Thursday, UW-La Crosse Chancellor Joe Gow said the university made the decision after systematic testing in the residence halls found a significant number of students tested positive for the new coronavirus but were asymptomatic.

"(Current) numbers are not nearly as high as they were two weeks ago. So that's a good thing, and we think we can quarantine and isolate those students effectively," Gow said during the forum.

The university plans to test all 3,000 students living in residence halls before resuming in-person classes on Oct. 5.

Officials have already started testing the roughly 1,500 students who remained in their dorms. Starting Monday, students who left their residence halls last week will return to campus in shifts after being tested by the university or showing results of a recent test.

The university is also hosting two mass testing events on campus with the La Crosse County Health Department for off-campus students, staff and the community on Thursday and Friday.

As of Thursday, La Crosse County had the highest number of COVID-19 cases per 100,000 people in the state, according to data from the New York Times. The county has averaged 102 new cases per day over the last week. According to the county health department, 80 percent of last week's positive cases were among people age 18 to 24 years old.

Gow recognized during the online forum the high level of virus spread in the La Crosse area. But he said part of the rising numbers could be a result of the university doing more testing than was previously available in the community.

"The challenge, of course, is to bring (case numbers) down to a reasonable level and we’re doing that here on campus. Out in the community, it’s another matter. And so we have to hope that our young people, because it's not just college students, it's the young people who are not impacted dramatically by the virus, that they have to come to realize that the rest of us are," he said.

Gow assured the campus community that university classrooms were safe and called on students and staff to do their part by wearing a mask and practicing social distancing in other campus spaces.

The return to campus for students comes as the La Crosse area marks what was scheduled to be the annual Oktoberfest festival. The event was canceled in June in response to the pandemic.

"We have received some reports that there will be bars that are running their own specials possibly and, possibly, a lot of different house parties," Hill said during the online forum. "We have officers that will be working in collaboration with City of La Crosse Police Department that will be out on party patrols, looking for underage drinking, and we’ll also be trying to provide education to people that we see that are not physical distancing or wearing their masks."

Hill said the department will not try to enforce the statewide mask mandate or write citations related to it.

La Crosse Police Captain Jason Melby said the return of students to campus is a concern considering the high number of COVID-19 cases already in the community.

He said the department has already dealt with large gatherings held by students this semester but has focused on issues like underage drinking, noise complaints and unlicensed beverage sales instead of trying to enforce the state’s coronavirus-related mandate.

"By addressing those concerns, we can maintain some level of maintenance on the size of these gatherings, just using the traditional enforcement actions that are available to us," Melby said.

Melby said the department also worked with local bars and other businesses this summer on enforcing mask requirements when students returned to campus. But he said enforcing the order has been difficult given exceptions for eating and drinking.