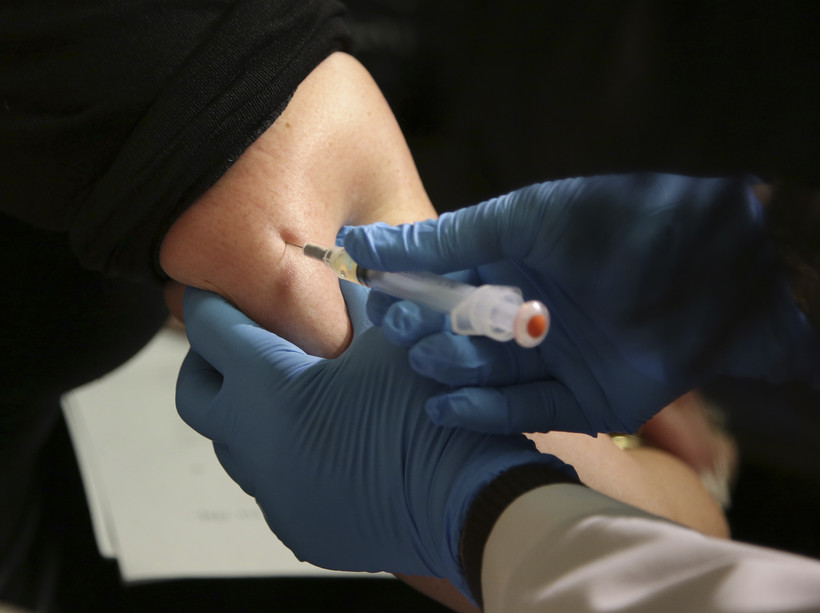 In Some Counties, 30 To 40 Percent Of Residents Not Fully Vaccinated
By Corrinne Hess
Share:

Wisconsin health officials say the state is at high risk for a measles outbreak.

The anti-vaccine movement has been blamed for the resurgence of the measles, which was declared eliminated in 2000, according to the CDC.

Children’s Hospital has opened appointments for measles vaccination at 23 of its primary care locations. Families can go online to schedule an appointment or check their child's vaccine history in the Wisconsin Immunization Record.

Milwaukee Public Schools, the state's largest school district, has been working to increase its vaccination compliance rates. Currently, 89.4 percent of students have met the minimum immunization rates compared to 44.9 percent in the 2005-2006 school year, according to district spokesman Andy Nelson.

Some families choose not to vaccinate for personal, medical or religious reasons. This is legal in Wisconsin, but families are required to provide a signed waiver to the school.

"In the event of an outbreak, MPS would work closely with the (Milwaukee Health Department) to identify students who are not up to date with their vaccines. These students would not be allowed to attend school until they receive their vaccination," Nelson said.

Wisconsin has the fifth-highest rate of measles vaccine refusal in the nation. And although the state hasn't recorded a case of the disease since 2014, Dr. James Conway, professor and associate director for health sciences at the University of Wisconsin-Madison School of Medicine and Public Health, said it's remarkable we haven't seen a case yet.

Measles is highly contagious and initially causes symptoms that can be easily mistaken for influenza or other common viruses. These ambiguous symptoms usually precede a classic measles skin rash. The disease also has a long incubation period and people who are infected might become contagious before they notice symptoms.

These factors make measles a difficult disease to control and they’re compounded in 2019 by the growing ranks of unvaccinated individuals, particularly children, and a health system that has become unaccustomed to the disease, Conway told Wisconsin Public Television's "Here and Now."

A bill has been proposed by state Sen. Patrick Testin, R-Stevens Point, and state Rep. Tony Kurtz, R-Wonewoc, that would allow trained pharmacists to give shots to younger children with a doctor's prescription.

In Vernon County, about 60 percent of residents are vaccinated, according to state health records.

"A lot of this is because of personal convictions, and that is something that we don't have much control over," said Beth Johnson, Vernon County Health Department director. "Measles is a very communicable disease and we’re out there working all the time, but we haven't gotten many more calls for the vaccination."

Michele Armbrust, a public health nurse in Taylor County, said many residents have read too many articles telling them vaccinations are bad.

"It's about trying to change the mindset, but unless you drag them in from the streets," Armbrust said.

In Taylor County, about 65 percent of residents have received the full dose of the MMR vaccination.

"People are scared because of the measles now, but we haven’t seen an increase in people requesting (the vaccination), and we haven’t done anything out (of) the ordinary to advertise come get your measles shot.”

Health officials with the Mayo Clinic Health System in northwest Wisconsin, headquartered in Eau Claire, told WisContext they are ready for a possible outbreak.

Stephanie Schauer, immunization program manager at the Wisconsin Department of Health Services, said the reasons differ from county to county as to why people aren't being vaccinated.

"We do try to provide scientific evidence to let people know that vaccines are safe and effective," Schauer said.

The department is also working on access issues and making sure people are aware of the federally-funded The Vaccines For Children program, which provides free medication to children who qualify.

"We don't want anyone not immunized due to cost," Schauer said, adding that nearly half of the children living in Wisconsin are eligible for the program.

Editor's note: WisContext's Will Cushman contributed to this report.

Related Links:
WisContext: Why Wisconsin Presents A 'Perfect Opportunity' For A Measles Outbreak