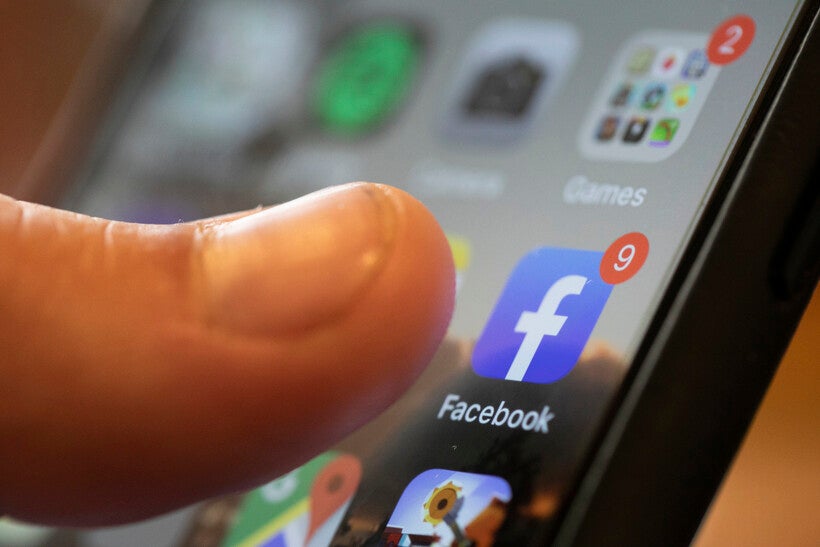 In this Aug. 11, 2019 photo, an iPhone displays the Facebook app. Jenny Kane/AP Photo

US Surgeon General Warns False Information Can Spread 'At An Unprecedented Speed' Through Social Media
By Shamane Mills
Share:

Milwaukee resident April Hill got vaccinated against COVID-19 as soon as she was eligible. She hoped the rest of her family would follow suit, but her daughter and six grandkids, who live in Kentucky, remain unvaccinated.

The situation became all the more dire when Hill's cousin in Georgia was put on a ventilator due to complications of COVID-19. That same cousin's son recently died of COVID-19.

"When they got to the hospital they asked, 'Can I get the vaccine now?'" Hill recalled. "And they said, 'No, it's too late.'"

Hill’s partner, John Spirewka, has also been dealing with vaccine-hesitant family members. His adult son doesn’t plan on getting the vaccine, while his other four children are vaccinated.

"I was excited. Like, 'Hey, you know what? Everybody gets a shot, and we can do things again. We can actually get together as a family again.' But we can’t." Spirewka said. 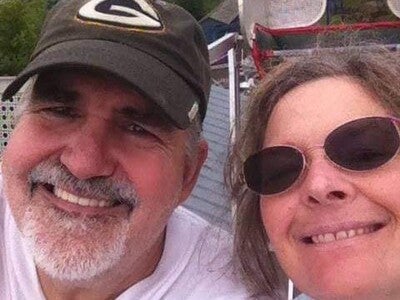 Milwaukee residents John Spirewka and April Hill both have relatives in Wisconsin and elsewhere who don't want to be vaccinated against COVID-19 despite pleas from family members. Shown in this 2017 photo, Spirewka and Hill relax at Little Amerricka Amusement Park in Marshall. Photo courtesy of John Spirewka

Health officials from the U.S. Surgeon General to local health departments have called on the public to counter misinformation and encourage family and friends to get vaccinated against COVID-19. They acknowledge it can be difficult to do, but say it saves lives.

However not everyone is willing to join the pitched battle over facts, even if they're vaccinated and want others to be.

On social media plenty of people stake out their stance on all things pandemic, including Facebook picture frames decrying "Disinformation is Deadly. Vaccines Save Lives." Many even engage with those who wrongly claim COVID-19 is just like the common cold, vaccines for the disease don’t work or could be harmful.

Pete Loerke recognizes those false statements when he sees them. Both he and his spouse are vaccinated, but he’s reluctant to urge others to get a shot.

"I just don’t think it’s my call to tell someone else what to do with their body," says the 54-year-old Madison resident who has "quite a few" friends who refuse to get vaccinated.

That hesitancy has public health officials concerned, and they’ve encouraged the public to help out.

Dr. Ben Weston, medical director of Milwaukee County Office of Emergency Management, is one of those officials.

"It may seem like an awkward conversation to start but it’s a critical one. Share your experience with the vaccine, tell your story," Weston said during an Aug. 3 media briefing. "You can help them to protect themselves and their community." 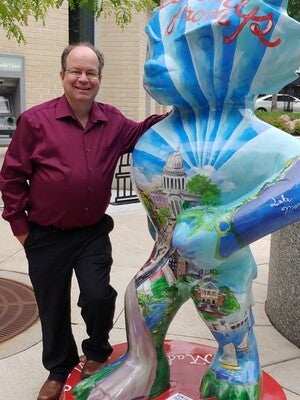 Pete Loerke poses on the Capitol Square in Madison next to a Bucky Badger statue in this 2018 photo. The Madison man is hesitant to call out people who post pandemic misinformation even though he wishes more people would get vaccinated against COVID-19. Photo courtesy of Pete Loerke

The main argument Loerke has heard from friends is they don’t think vaccines work.

It’s a common misconception, according to a Kaiser Family Foundation poll which found most unvaccinated adults don’t believe the vaccines are very effective and that they are a greater health risk than COVID-19.

But, the director of the National Institute of Allergy and Infectious Disease, Dr. Anthony Fauci, has said studies continue to show that vaccines are not only effective against the virus, they're also highly effective at preventing serious disease, hospitalization and death.

State health officials say they are trying to be "honest and upfront" in explaining how mask-wearing and vaccination can protect people, but concede their communication efforts are being thwarted by misinformation.

Misinformation was described as "a serious threat to public health" in a July 15 U.S. Surgeon General’s report which noted misinformation can spread "at an unprecedented speed and scale" through social media.

"Unfortunately, that has led many to believe that the most important tools are not effective or not safe," despite millions of people being protected from severe disease by getting the vaccine and a very small number having complications, said Wisconsin Department of Health Services Deputy Secretary Julie Willems Van Dijk during a July 28 briefing.

Politics, too, has played a role with skeptics thinking both sides have an agenda in either downplaying the pandemic or exaggerating the number of cases or their severity.

And that uncertainly can determine whether people accept or reject the vaccine. A Quinnipiac University poll released Thursday found 33 percent of Republicans don't plan to get a COVID-19 vaccine, compared to 22 percent of independents and 5 percent of Democrats.

Spirewka said he believes his son has conservative friends who are influencing his decision not to get a vaccine.

Epidemiologist Ajay Sethi teaches a class at the University of Wisconsin-Madison called conspiracies in public health. He says misinformation can have serious consequences and if people see or hear something that’s wrong, they should try and counter it, similar to rejecting racist remarks or actions.

"I don’t tell my students to do this, but I tell them maybe we should draw on the principles of calling out racism," said Sethi. "If you see something, say something, recognizing you may be talking to a Russian bot online. So, we have to decide when our efforts are worth it."

The Centers for Disease Control and Prevention has tips on how to talk with friends and family about COVID-19 vaccination and also how to address misinformation.

Related Links:
Vaccine Misinformation Is Spreading Among Kids, Too — Especially On Social Media