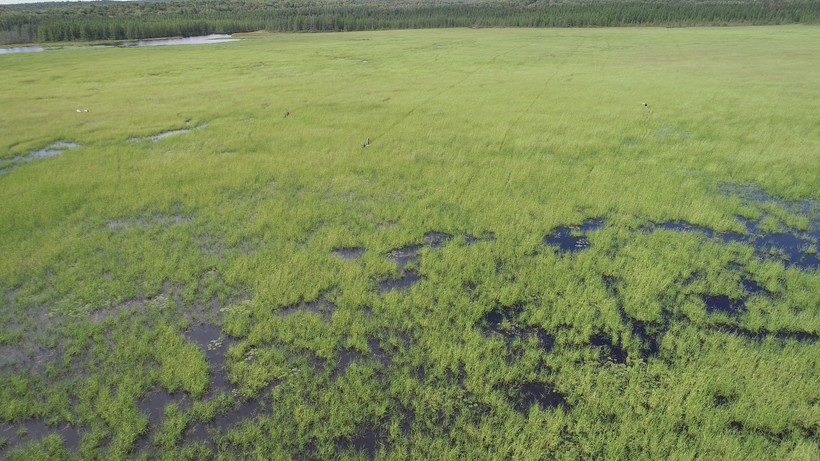 Great Lakes Indian Fish and Wildlife Commission identifies fungal disease in many areas across the northern part of the state
By Jenny Peek
Share:

With the end of summer comes peak harvest time for Wisconsin wild rice, known as manoomin in Ojibwe.

Despite declining wild rice populations, this year's harvest is expected to be "relatively average" across the northern part of the state, the Wisconsin Department of Natural Resources announced Monday. But what's average now is a sharp departure from harvests of the past.

"While most lakes, flowages and rivers that have historically produced wild rice are likely not going to produce enough to make harvesting efforts worthwhile, there are a few regions showing promise for good harvest," DNR Wetland Habitat Specialist Jason Fleener said in a press release.

Fleener later told Wisconsin Public Radio that the last five to 10 years have been especially difficult for the crop.

"If you go back several decades, there were a lot more rice waters that were productive enough to make a harvest worthwhile," Fleener said. "And over time, unfortunately, a lot of those rice beds have all but disappeared on numerous lakes."

Climate change, habitat destruction and poor water quality have all contributed to the crop's decline.

The Great Lakes Indian Fish and Wildlife Commission, or GLIFWC, is in charge of monitoring manoomin throughout the state. They list open harvest dates and paddy locations on their website for anyone interested.

Kathy Smith is GLIFWC's Manoomin Genawendang — or "she who takes care of the wild rice." She recently spoke to WPR's "The Morning Show" about how the end-of-summer harvests are estimated.

"We fly over the Manidoo Ogitigaan, which means the 'Spirit Gardens,'" Smith said. "So manoomin water bodies are assessed from the air which are given an overview of conditions for the upcoming season."

GLIFWC uses both aerial and on-foot assessments to help determine if a crop is ready to harvest. Those surveys also help the DNR and GLIFWC track brown spot, a fungal disease that threatens wild rice.

This year, GLIFWC found evidence of brown spot in paddies across the state. But there haven't been any "definitive outbreaks" of the fungal disease like in past years.

The crop, which grows in northern wetland areas, has been increasingly impacted by climate change in recent years. And while exact numbers are unknown, researchers estimate close to half of the manoomin that was once in Wisconsin has been lost.

"The climate change threats to manoomin are higher humidity levels and fluctuation in our water depths," Smith said. "Periods of prolonged high water levels prevent seed germination and spring flooding. It actually uproots the young plants during the floating leaf stage. So if we have a high rain event, that can really compromise the plant."

But Fleener says the outlook isn't all bad, and that people looking to harvest wild rice this year shouldn't be deterred.

"It's not all bleak, because there are a lot of lakes that are doing very well," he said. "It's just a matter of knowing where you go."

Wild rice is unique to the Upper Midwest, and can't be found anywhere else in the world, Fleener said. It's one of the many reasons the DNR and GLIFWC are working to educate people about the species.

"An important thing for folks of the public to know ... is just to recognize what wild rice looks like," he said "We encourage folks if they're going out on the water to really be respectful of rice, and not only because it's a harvestable crop or resource, but it's really important for wildlife. And it's extremely important for Indigenous people of Wisconsin."