An 'Indicator Plant': Wild Rice Struggles To Survive In A Changing Climate
Manoomin, A Cultural And Nutritional Staple For Thousands Of Years, Faces Wide Range Of Threats
Home
/
On The Table
Monday, March 2, 2020, 6:00am
By
Mary Kate McCoy
Share:

Manoomin, or wild rice, has been a spiritual, cultural and culinary staple for Wisconsin tribes for thousands of years. But experts estimate it’s lost nearly half of its historic range and say climate change is likely the greatest threat it’s ever faced. Those who work with manoomin know how sensitive the native, annual plant is, and warn it’s an indicator species of climate change. In this series, WPR is exploring how the state can adapt to and mitigate the affect climate change is having on some of Wisconsin’s most iconic foods.

If you pay attention, wild rice makes a distinct sound when it blows in the wind, said Peter McGeshick III, wild rice chief of the Sokaogon Chippewa Community.

McGeshick, 55, has been harvesting manoomin, or wild rice, almost his entire life — he still gets impatient for harvesting season every late summer, he said.

Out on the water during ricing season, McGeshick stands in his canoe, reaches into his tobacco pouch and thanks the Creator. When ricing, you’re watching an entire ecosystem at work, he said.

"I'm looking at our lake and it's beautiful, it's green, you can see them (manoomin) — usually the wind is blowing a little bit at this time and you can hear it," McGeshick recalled. "The moment you hit the rice you feel safe because that steadies your boat."

Manoomin has been a spiritual, cultural and culinary staple for Native Americans for thousands of years. Ojibwe prophecy led the people to migrate from the eastern part of the continent to the Great Lakes region, where the food grew on water.

That food turned out to be manoomin, a grain that was an incredible nutritional source in the region and became critically important to the native diet for generations.

As manoomin’s role as a food source has evolved over time, so has the role of tribal rice chief, McGeshick said.

Today, McGeshick is tasked with restoring manoomin on historic lakes and protecting its cultural significance.

While exact numbers are unknown, researchers estimate close to half of the manoomin that was once in Wisconsin has been lost. The waterways it’s found a home on for thousands of years have been turned upside down by habitat loss, water quality and human activity.

Climate change is yet another challenge to manoomin’s future. Tribal members and researchers are fighting to preserve the plant through restoration and educational efforts, but say the sacred plant faces an uphill battle to survive in a changing environment.

To McGeshick, restoring manoomin is about more than just the one plant — it’s restoring an entire ecosystem that people, animals and plants rely on. 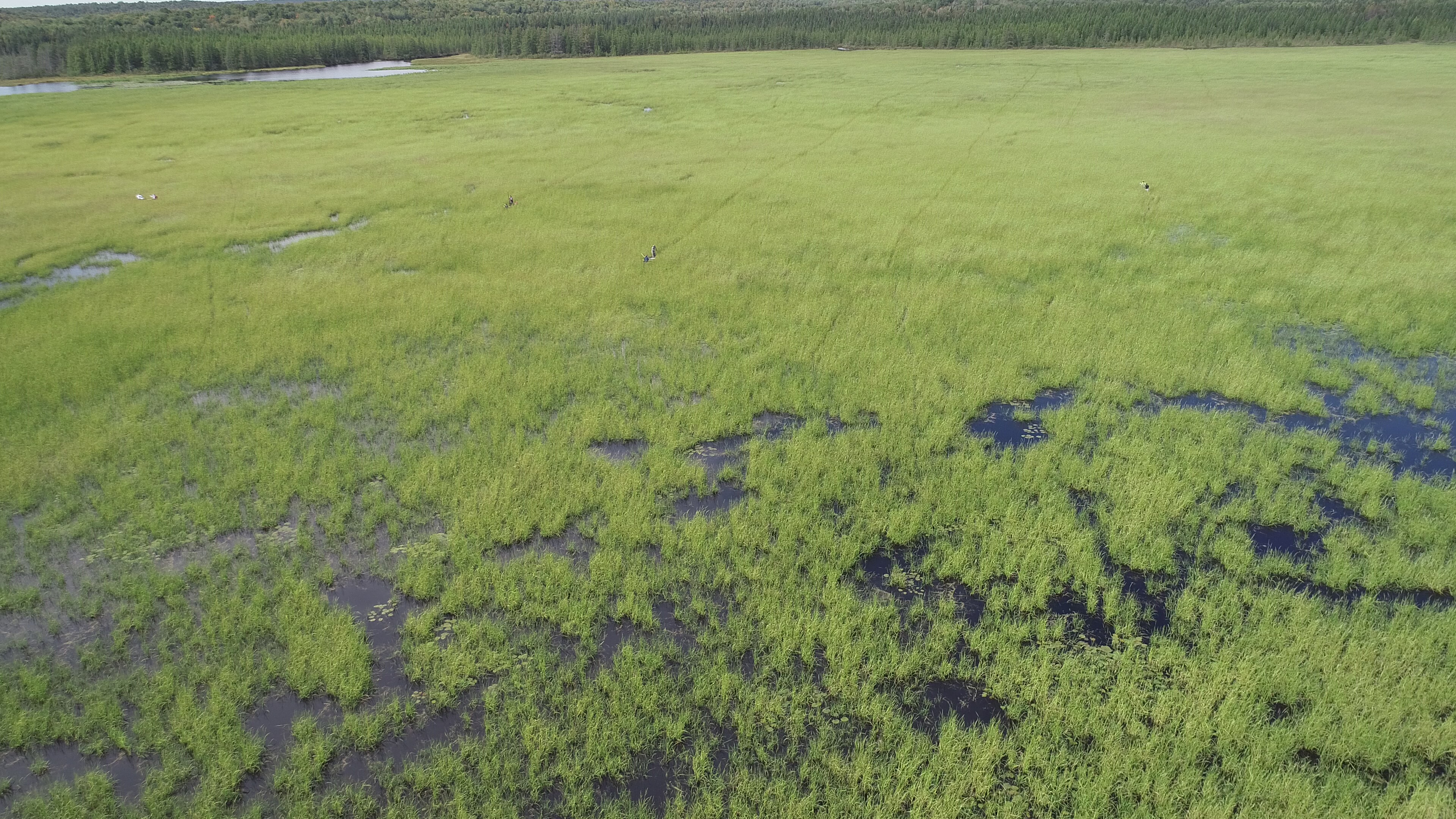 By mid-August manoomin begins to ripen.

McGeshick can tell right away if the manoomin is ready to harvest.

"If it's really ripe, I will see it when I reach over to grab it because it will start to fall off," he said. "I want to get as much of that rice into my boat as possible, but know that the majority of that rice is going to come off before it gets to the boat."

At the same time he’s harvesting manoomin for the year, he’s reseeding the lake for the following season with the manoomin that falls into the water instead of his boat.

Manoomin, an annual plant that grows in roughly the northern third of Wisconsin, is extremely sensitive. It’s adapted to the cold, harsh conditions of northern Wisconsin and needs to go through an overwintering period to germinate in the spring.

It’s also picky about water conditions, particularly in early summer during its floating leaf stage — when it floats on the water like a bobber, said Nathan Podany, Sokaogon Chippewa Community hydrologist. 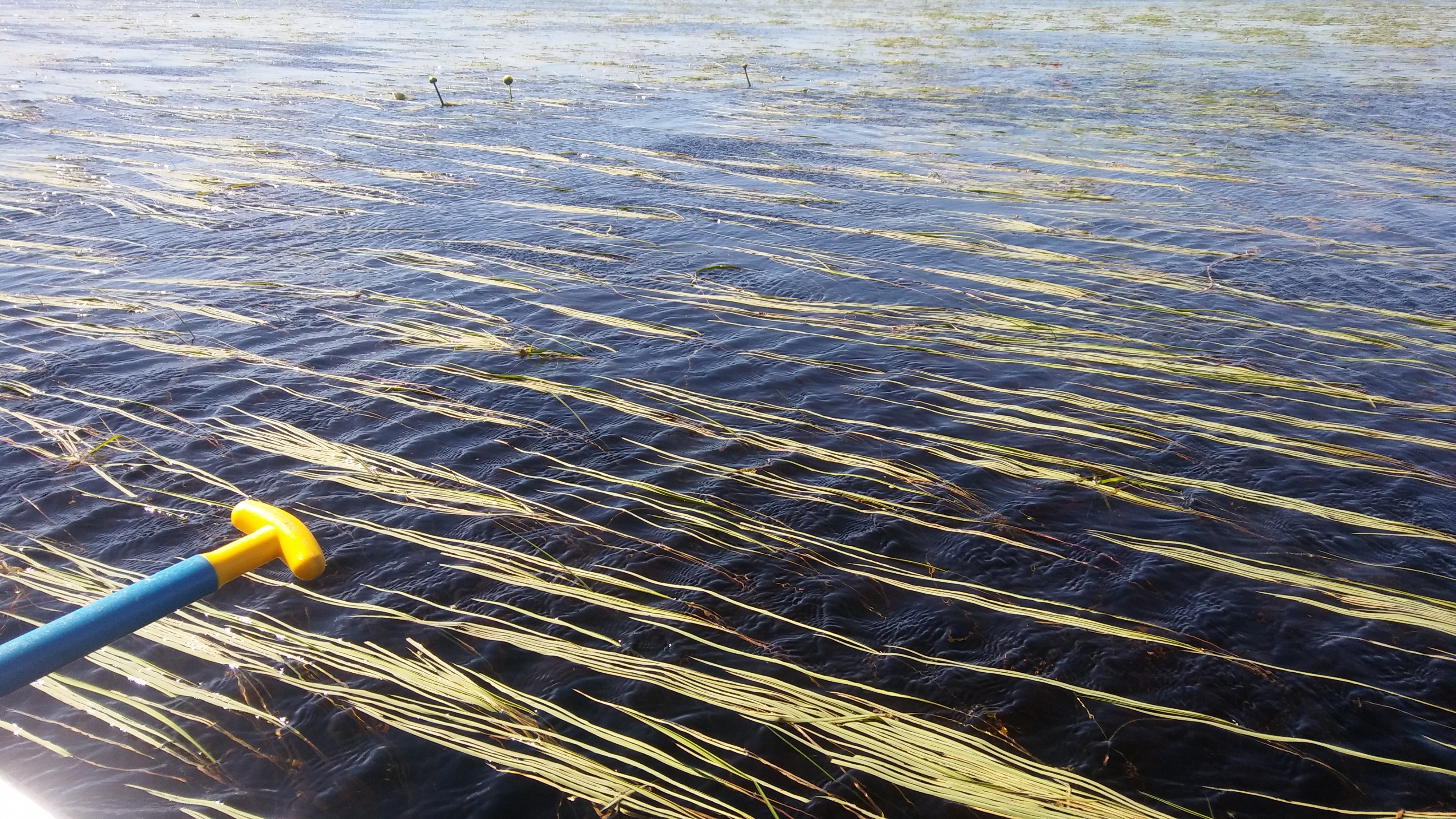 Manoomin during the floating leaf stage. Photo courtesy of the Sokaogon Chippewa Community

Manoomin favors clear, flowing water that’s about a half foot to 3 feet deep. During the floating leaf phase manoomin is particularly vulnerable to fluctuating water levels and heavy rain that can uproot it’s delicate root system.

But too still of water, and manoomin can be outcompeted by other plants like lilies and cattails.

"Everyone that works with rice realizes how sensitive it is," Podany said. "All these things that climate change is exacerbating definitely impact wild rice ... it's going to be one of these plants that's really impacted by climate change the most."

"All these things that climate change is exacerbating definitely impact wild rice ... it's going to be one of these plants that's really impacted by climate change the most," said Nathan Podany, Sokaogon Chippewa Community hydrologist.

The Biggest Threat Manoomin Has Ever Faced

Manoomin isn’t just food on the table that’s replaced with another food, or food from another place, he said.

"The whole aspect of harvesting it and interacting with it and having a relationship with it is a big part of the cultural tie," he said. 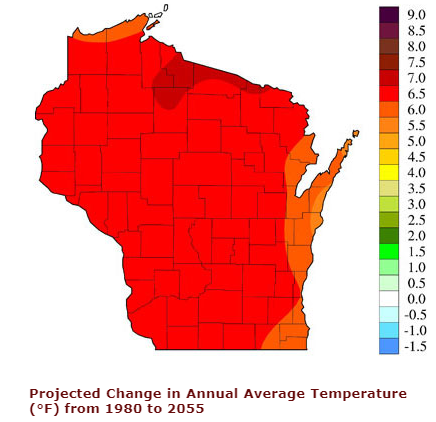 Northern Wisconsin is expected to warm the most in the state over the next 50 years. January 2020 was earth’s warmest January on record, and four of the warmest Januaries have occurred since 2016.

2019 was the wettest year ever recorded in Wisconsin, capping off the state’s wettest decade on record. Statewide projections suggest Wisconsin will experience a roughly 25 percent increase in heavy precipitation events of at least 2 inches by mid-century.

As winters warm and extreme weather events occur with more frequency, so do the odds of major losses to the native plant.

An intense rainfall can wash out or drown manoomin and wreak havoc on infrastructure like dikes and dams that support artificial flowages — areas where rice has been planted to make up for historic losses.

Graph courtesy of Dan Vimont, director of the Center for Climatic Research

Manoomin is at the mercy of the weather more than many other traditional agricultural crops, Podany said.

While farmers have the option to hold off planting for a time, manoomin self seeds and needs to overwinter.

"You can't just put it into the water when you want," Podany said. "It has to go through an overwintering period, and then once it reaches a certain temperature and we have certain daylight hours, then it'll start to germinate."

Plant disease and pests flourish under warm, wet and humid conditions. And concerns about brown spot, a fungal disease that can wipe out production, are a constant worry throughout the summer, Podany said.

Outbreaks weren’t common for many years, though the unusually warm years of 2005 and 2010 dramatically affected harvest. But Podany said it could be a big issue moving forward.

"As we have hotter, more humid nights combined with those hot, humid days, these leaves and stalks just really never dry off and brown spot can take over really quite quickly," he said.

Milder winters also appear to be opening the door to non-native competition that typically can’t survive in the region’s harsh winters, David said.

"It seems like the milder the climate becomes, the more different invasives you have to deal with," he said. "The harsh climate kept some things sort of at bay and not a direct competition (to manoomin)."

Growing up off the reservation in Rhinelander, McGeshick said he would pick manoomin after school with his dad, who was rice chief before him.

"(He) showed me where all the places were where he grew up," McGeshick said. "And now of all the places that he took me to … I would probably say there's about 20 bodies of water that used to have rice, now I know that I can pick on two of them."

Wisconsin’s manoomin population falls along the southern edge of the plant’s habitat.

Tribes' gathering rights are restricted to the lands ceded in the treaties of 1837 and 1842, lands that include the southern edge of northern wild rice's range, David said.

"And if it turns out that a century from now, the wild rice is going to do fantastically in Canada, that doesn't help our members," he said. 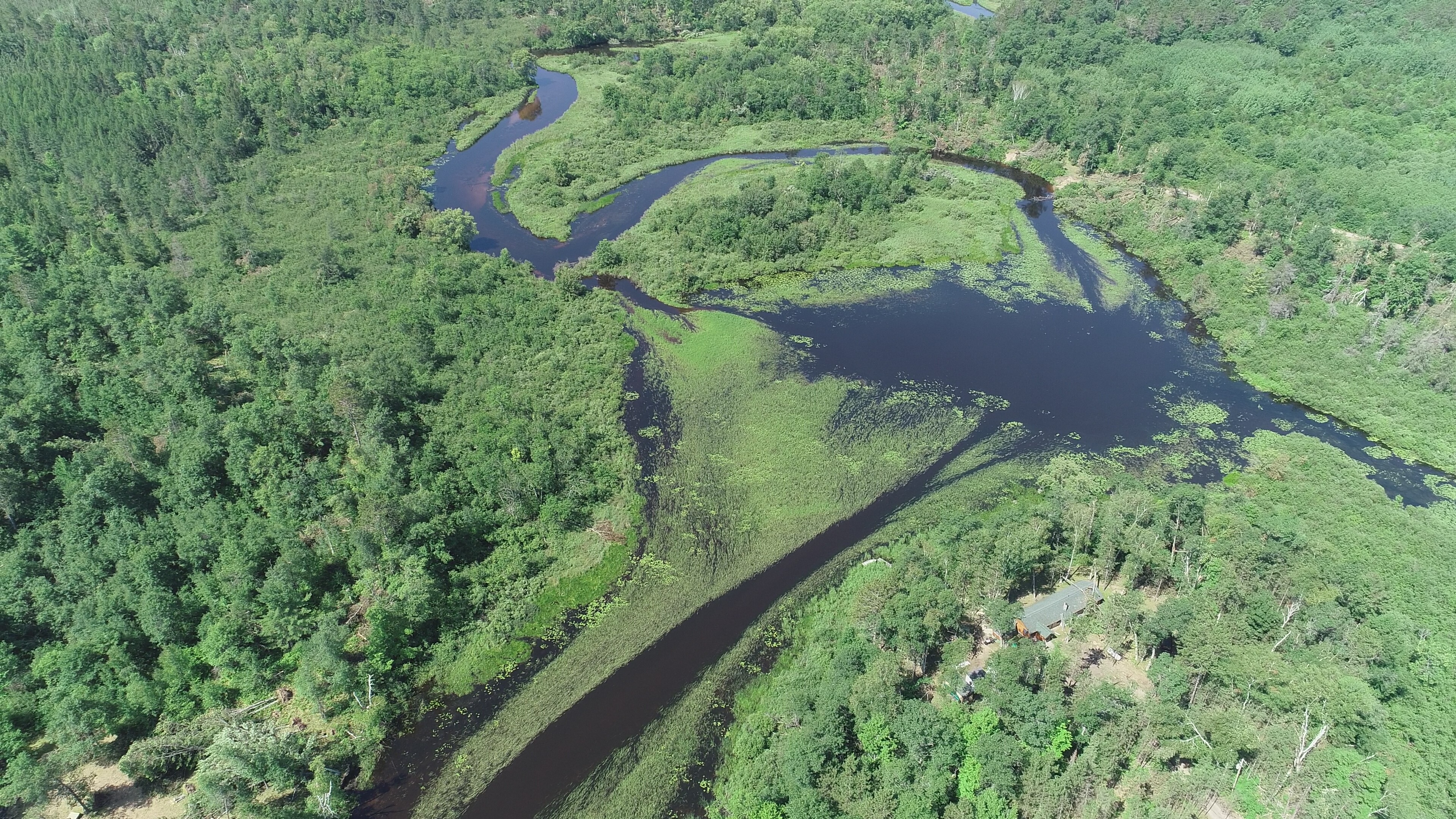 Manoomin on the Wolf River. Photo courtesy of the Sokaogon Chippewa Community

McGeshick said he hopes it’s not too late for manoomin.

"People are starting to find out that wild rice is really an indicator plant," McGeshick said. If manoomin grows, it’s a sign the water is good, he said.

And more people are beginning to take notice and understand the challenges manoomin faces, Podany said. Restoration efforts can have a large impact.

On the Sokaogon Chippewa Community reservation in northeastern Wisconsin, 2019 was one of the best years for manoomin in recent memory.

"The crop that we had this year is reminiscent of crops that we had 20 years ago," McGeshick said. "We picked 20,000 pounds of wild rice off of our lake this year, which is an incredible amount of wild rice."

But that didn’t come without hard work, Podany said.

For manoomin to flourish, the entire ecosystem needs to be intact.

On Rice Lake where McGeshick harvests, no houses or motorboats disturb the manoomin, and trees and wetlands buffer the lake. And a great amount of work has gone into removing the lilies and cattails that can outcompete manoomin, Podany said.

"There's been a lot of money, time and effort put in by a lot of people, a lot of community members ... to rectify some of these hydrologic issues that have occurred," he said.

Though there’s not much you can do when an extreme rain happens.

And once manoomin has been lost from a lake, it’s difficult to bring it back because of the amount of time, money and effort restoration often needs.

"I don't think we should lose hope," Podany said. "I still believe in restoration efforts. I still believe that rice has a place in this state and it should forever as long as we continue to care for it."

"I don't think we should lose hope. I still believe in restoration efforts. I still believe that rice has a place in this state and it should forever as long as we continue to care for it," said Nathan Podany, Sokaogon Chippewa Community tribal hydrologist.

McGeshick gets emotional when he speaks about manoomin.

"People always ask me what it means to me … and I always found it difficult," he said. "I always tell them, 'You know what? It's a feeling, it's not something that you can put into words.'"

To him, it’s family, he said. He respects it and cares for it like his family members.

McGeshick’s job now is to make sure it’s there for future generations. 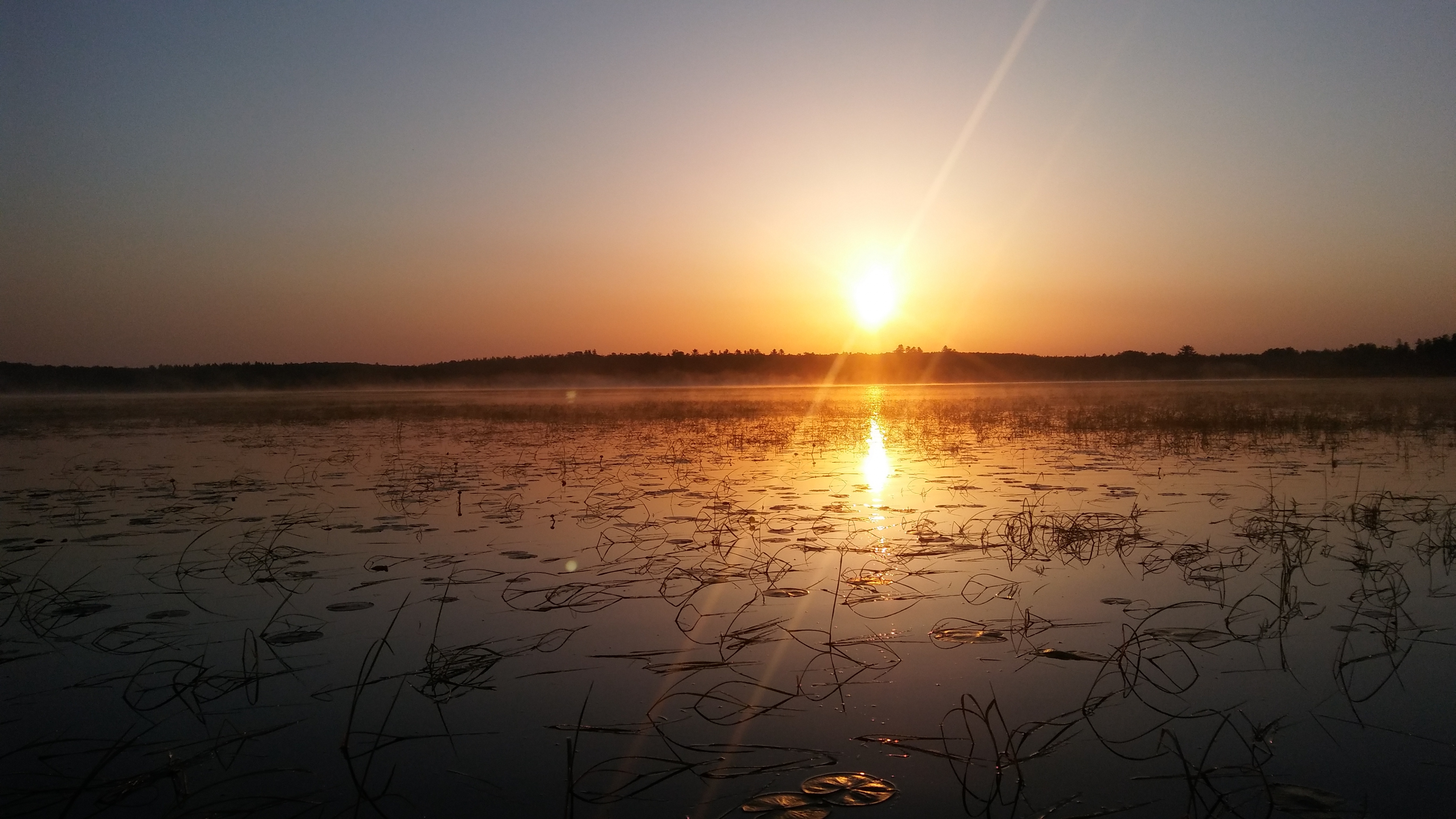 Manoomin during its emergent phase on Rice Lake. Photo courtesy of the Sokaogon Chippewa Community