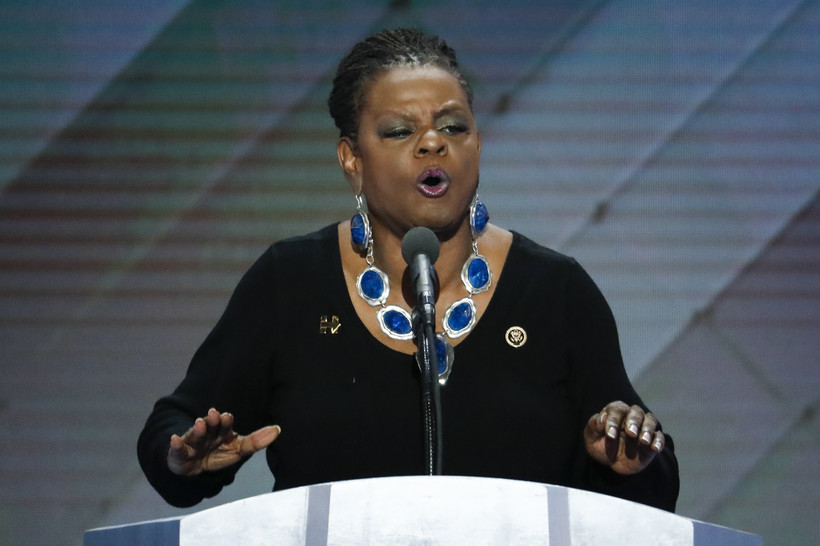 U.S. Rep. Gwen Moore is no fan of President Donald Trump's proposed border wall and said she is interested in other options to improve the nation's border security.

The president's plan, which includes diverting funds from other military projects to fund a physical barrier, has been met with stiff resistance among Democrats in Congress, Moore included. She had strong words for the president's proposal.

"His is just stuck on stupid, waiting on dumb to come, to spend all this money on a border wall," Moore said.

The interview has been edited for brevity and clarity

Kate Archer Kent: This year, President Trump moved $3.6 billion in funding for military base projects to pay for the border wall and we recently learned some of this money would have funded a small arms range for Wisconsin's Air National Guard. (U.S.) Sen. Ron Johnson says Congress will approve new funds to cover that project. What is your view here?

Gwen Moore: With all due respect to Sen. Johnson, he is covering his behind with those comments. It is really a hard negotiation to get a budget done. We worked toward getting these funds for the Defense Department, and as a matter of fact, the Pentagon has pushed back on this notion that we're going to just allow the administration to hijack, to steal the money, and we could just backfill it. No. Not only do they want to take $3.6 billion out of the fiscal year budget, but prospectively in the fiscal year 2020 budget. He wants to take another $8 billion plus for his border wall.

We need border fencing. We have appropriated dollars in Congress to fix up fencing where it's appropriate. But even Republicans (have) ... indicated that this is just stuck on stupid, waiting on dumb to come, to spend all this money on a border wall. There (are) much more effective ways to protect our border and we need to use these funds for more electronic and technological surveillance as well as providing more personnel.

KAK: What do you think of how Democrats are responding on the international front?

KAK: What should our response be to Iran?

GM: We're not under any obligation. We have sold a lot of weapons to Saudi Arabia. It's their responsibility to, to protect their terrain and their assets and their resources. President Trump, for example, says we're not going to be the police of the world. So why make the first exception Saudi Arabia? We don't have a formal agreement with them versus our strong relationship with NATO. So it seems so counterintuitive to me for us to be backing away from our strategic and historic alliance with NATO. And yet we're going to double down on a relationship with Saudi Arabia. If we're going to do anything, he needs to come to Congress with that and not make some unilateral decision from the White House based on an old authorization to use military force.

KAK: We talked with Sen. Ron Johnson earlier this week about NAFTA and the replacement for it, the United States-Mexico-Canada (USMCA) trade agreement. It seems as if Democrats are on board with it. House Speaker Nancy Pelosi said earlier this week that they're on a path to yes. Do you support that agreement?

GM: There are still some sticking points. The working group is focusing on four areas that the caucuses identify that this USMCA is falling short. That is strong enforcement mechanisms (for) the labor rules that Mexico has adopted, access to affordable medicines, the chapter on pharmaceuticals, the environmental rules, and again, the enforcement for all of the above. I think we're waiting on the U.S. trade representative to really get back to us and try to figure out where we can come to some compromises on these elements.

KAK: We also spoke with Johnson about the chance of another government shutdown as we see Sept. 30 coming. He voiced his concerns (that) House Democrats and Senate Republicans remain far apart on spending. What is your view?

GM: I'm suppressing my hysterical laughter from just listening to your little blurb there of Sen. Johnson talking about how the Democrats don't want a deal. As I indicated earlier, just a teeny tiny sticking point is that the Republicans want over $8 billion to be taken out of the fiscal year budget for that stupid wall in addition to $3.7 billion from fiscal year 2019.

KAK: This summer, you introduced a bill that would expand Medicaid reimbursement rates for doulas and midwives, and you said it would help low-income mothers and mothers of color who too often experience poor birth outcomes. But there are lots of competing interests here: dentists, nurses, mental health professionals. There are so many others who want Medicaid rate hikes. Are doulas and midwives your top priority for expanding Medicaid?

GM: Thanks for that question, Kate. I think it was a great setup for a conversation about the need to expand Medicaid, period. The reality is that dental, vision, all of these things are important for people's overall health but you got to be born first. You know you got to have a good start. And we have found that maternal deaths and infant deaths really rival those in so-called third world countries. So this is a crisis, particularly among women of color, when you can have better outcomes in places like Afghanistan than you can in the United States.

KAK: Aside from Medicaid reimbursement rates, are there other ways that the federal government should be addressing these socioeconomic gaps and birth outcomes?

GM: Well, yeah. We've talked to doctors that systemic racism, period, really threatens the health of people of color. We (don’t) know whether or not people's symptoms will be taken seriously. I remember way back in the day when I was in my 20s, a former classmate of mine went to the emergency room and they literally gave her some Tylenol and (said), "Go home." She had an ectopic pregnancy. They just didn't take her symptoms seriously, didn't put their best effort forward to address her. We found this problem compounded over the years. And it's just unnecessary. These are preventable deaths.

GM: You don't save money at the expense of feeding children. (Trump) wants to lower the threshold for eligibility for (food stamps) down to 130 percent of the poverty level. We already know the poverty level is way far below what it ought to be. This would put about 4 million people more in deep poverty and not provide them with just basic nutrition.

Another thing (Trump) wants to do is include (food stamps) as part of public charge. The new rules that were just promulgated would really target low-income, poor immigrants to say they wouldn't have a path to citizenship if there were any uptake of the use of (food stamps). This would mean that immigrants would find themselves being hungry when otherwise they might be eligible. And this is just another inhumane way of poking a finger in the eye of immigrants.