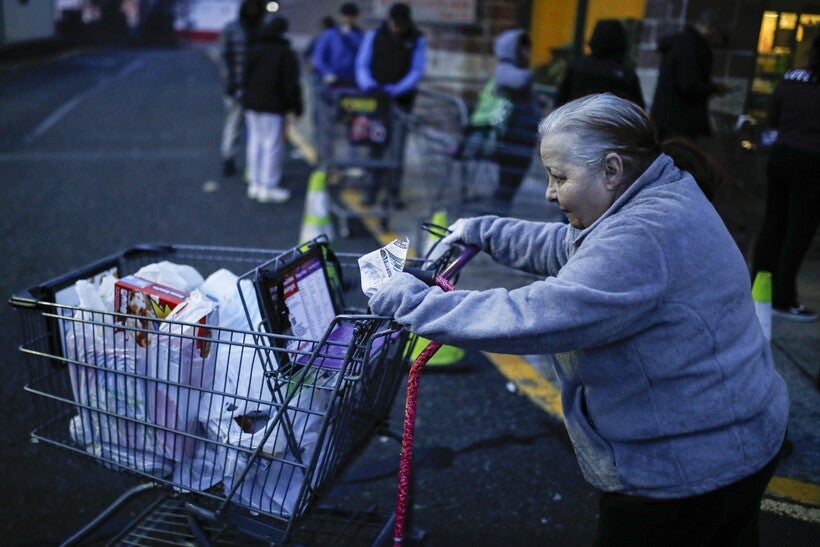 Customers exit with loaded shopping carts at a Stop & Shop supermarket that opened special morning hours to serve people 60-years and older due to coronavirus concerns, Friday, March 20, 2020, in Teaneck, N.J. For most people, COVID-19, the disease caused by the new coronavirus, causes only mild or moderate symptoms, such as fever and cough. For some, especially older adults and people with existing health problems, it can cause more severe illness, including pneumonia. John Minchillo/AP Photo

Grocery Industry Leader: How To Shop During The Coronavirus Outbreak

Food Supply Chain Is Solid, But Panic Buying Can Cause Problems
By Judith Siers-Poisson
Share:

Grocery stores in Wisconsin and across the country are feeling the pressure to keep up with demand as people stock up amid the new coronavirus outbreak.

Panic about how long the threat of COVID-19 could last has led some consumers to buy massive amounts of household items such as toilet paper and disinfecting wipes. And there have been reports of some bare food shelves as people prepare to wait out the virus at home — though many stores report that most items are in stock.

Brandon Scholz, president and CEO of the Wisconsin Grocers Association, said it’s understandable that when people see empty shelves that are usually full, that can make some people panic and want to stock up.

But Scholz said he thinks after those initial impulses to fill home pantries and supply closets, people are taking a bit of a break as they settle into a new reality of staying home. And if they've gotten the most necessary supplies, they can slow down on stockpiling.

The Wisconsin Grocers Association and their members stores are hoping to reinforce the message that no one needs to be afraid that store shelves are going to be bare in the long run.

Scholz said they're encouraging people to buy what they need for the day, or maybe the week, but not much more. He said it’s the buying that is outside of usual shopping patterns that makes it hard for the entire food supply to adjust to keep up, and to predict need and demand.

"If they go on a massive panic buying, stockpile and hoard, that’s really going to challenge not only the retail level at the store, but it’s going to challenge the supply chain from the beginning, of manufacturers and growers and processors up through ... distribution, transportation and eventually retail." he said.

"We could keep products coming in," he added, "but we just have to have it balanced."

Some retailers have put a limit on how many of one item shoppers can buy at one time. Those might be products like toilet paper and bottled water, which have been sold out in many stores, or food items like rice or chicken that have been in high demand.

Scholz said it's not an indication of shortage, but just trying to reestablish that balance of how much people are buying.

Some shoppers might be noticing that stores are cutting back their hours, and often closing earlier than usual. Scholz said that serves three main purposes: one is to restock shelves because they may be getting one or even two trucks in each day with new merchandise.

"That’s a lot of product to show up into a grocery store’s docking station in back, and it takes a lot of manpower to put that stuff on the shelves quickly," he said.

The second reason for reduced hours is to give employees a break in a time of unprecedented demand.

Scholz hopes that despite the stress shoppers are under, they’ll think to thank the grocery workers who are helping them. He also asked that people hold off on using reusable bags right now so workers are not exposed to the virus that may be on them.

The third reason stores may be open less is to completely sanitize the store.

According to Scholz that includes "anything that's touchable." And that is especially important as some stores reserve the first open hour or two for high-risk individuals to do their shopping. That means they're able to use the store when it's at its cleanest.

The state and federal government have also been paying attention to the food industry and have changed certain regulations to relieve pressure on the system.

Scholz pointed to Gov. Tony Evers' lifting weight restrictions on trucks from 80,000 pounds to 88,000 as a helpful step.

"Some people might think 8,000 pounds isn’t much, but because we’re running trucks every day, twice a day, that extra 8,000 pound allowance ... helps just to put more product on the truck," he said.

Scholz acknowledges that this type of crisis and the shopping habits it’s inspiring is unique, and neither individuals nor the system has had to deal with it before. But he's confident that with consumer cooperation, his member stores and those beyond are up to the challenge.

"The grocery industry, and its suppliers, manufacturers and vendors and producers will put the food in the aisles so you can put the food on your tables," he said. 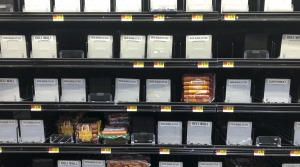 As more people head to grocery stores to stock up on food and other household essentials amid the novel coronavirus outbreak, many customers are being confronted with bare shelves. We talk with an industry expert about how grocery stores are handling the increased demand in Wisconsin.