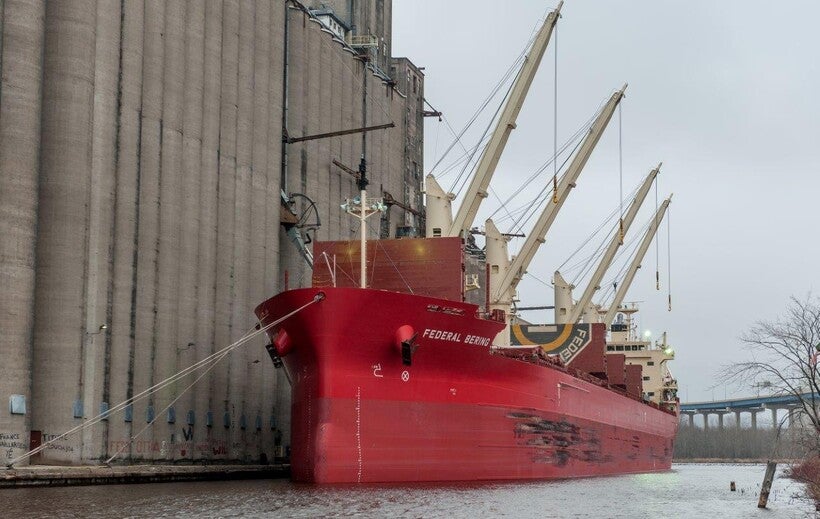 The Federal Bering loads grain at the CHS elevator in Superior.
Photo by Robert Welton and courtesy of the Duluth Seaway Port Authority

Great Lakes ports are reporting a rebound in cargo shipments this year after the region’s largest port witnessed historic lows during the coronavirus pandemic in 2020.

The Port of Duluth-Superior bounced back this year after cargo shipments dropped to their lowest level in 2020 since 1938 with a total of 25.8 million tons moving through the lakes’ largest port. As of the end of November, the port had handled around 29 million tons of cargo, marking a 30 percent increase from the same time last year.

The port has already surpassed 30 million tons for the year as the shipping season is set to wrap up on Jan. 15 with the closure of the Poe Lock at the eastern end of Lake Superior.

"We really expected a bounce back. All the trends were in place for things to rebound from those COVID-induced lows," said Jayson Hron, communications director for the Duluth Seaway Port Authority. "Domestic steel demand was on a good trajectory, and that certainly helps given that iron ore comprises a little over half of our total tonnage from this port."

The port handled around 17.9 million tons of iron ore through November, which is up 37 percent from last year and roughly 22 percent ahead of the five-year average.

The port also saw a more than 50 percent increase in coal shipments with 6.8 million tons moving through the Duluth-Superior harbor. Hron said that was driven by an increase in shipments of petroleum coke, or petcoke, heading overseas. Petcoke is a byproduct of the oil refining process that can be used as a substitute for coal in power plants.

The Port of Green Bay reported that cargo shipments were up 9 percent from the same time last year through November, handling a total of roughly 1.8 million tons. Last year, the port moved around 1.9 million tons — down more than 15 percent from 2019.

The port’s director, Dean Haen, said the largest growth stems from movement of petroleum products as foreign imports are six times higher than last year. He noted they also saw smaller increases in shipments of limestone and cement, as well as shipments of new commodities like carbon anodes and ash.

Haen said demand for products has increased as manufacturing and new construction has been strong across the region.

"The port tends to be like a leading indicator, so as we're ending the year strong, (it) means the economy in our area should stay strong well into the spring," said Haen.

Other Great Lakes ports like Cleveland said overall cargo shipped was up by more than 50 percent while the Port of Toledo saw overall tonnage increase 22 percent as of the end of November, according to the Chamber of Marine Commerce.

"U.S. Great Lakes ports have roared back this year — recovering from major 2020 declines in traditional cargoes like iron ore and steel but also developing new business and seizing on opportunities for infrastructure investment," said Bruce Burrows, president and CEO of the Chamber of Marine Commerce in a statement.

The St. Lawrence Seaway, which serves as a gateway between the Great Lakes and the Atlantic coast, saw iron ore shipments rise 17 percent while general cargo shipments increased 71 percent through November.