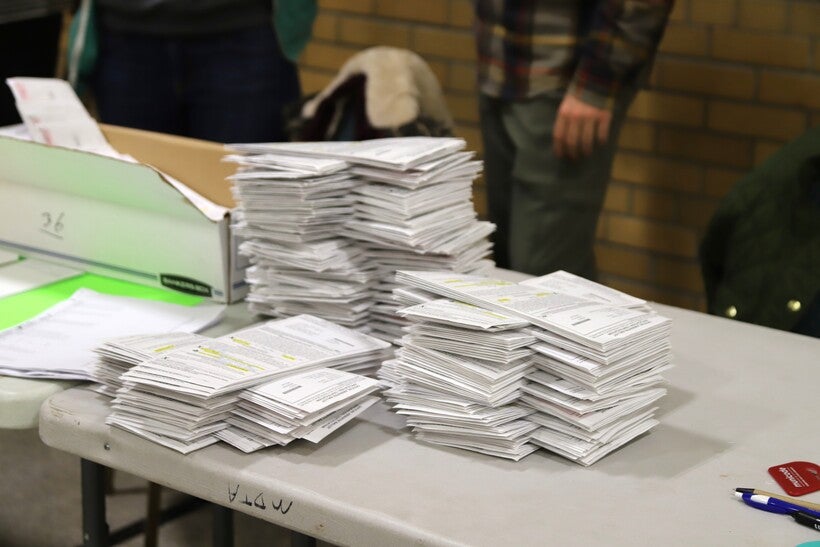 Stacks of absentee ballots wait to be counted at Mendota Elementary School on Madison's north side on Nov. 3, 2020. Steven Potter/WPR

The plan could affect thousands of absentee ballots in the upcoming election
By Shawn Johnson
Share:

The Legislature's top Republicans want to revoke a policy that requires clerks to fill in missing information on absentee ballot witness certificates, a move that could lead to the rejection of tens of thousands of ballots statewide.

The bipartisan Wisconsin Elections Commission unanimously endorsed the policy in 2016, issuing written guidance to clerks on how to handle absentee ballots. Under that policy, municipal clerks must take action to correct errors in the witness addresses on certificates.

After the nonpartisan Legislative Audit Bureau scrutinized the Elections Commission's actions, the agency began the process of turning its guidance into an administrative rule. That would give it the force of law, but it also gives the Legislature a chance to veto the plan.

In a letter released Thursday, Senate Majority Leader Devin LeMahieu, Assembly Speaker Robin Vos and Assembly Speaker Pro Tempore Tyler August called on the Joint Committee for Review of Administrative Rules to suspend the proposed rule, which would kill it.

"WEC does not cite any explicit statutory authority that allows it to promulgate a rule covering all of these issues," wrote the GOP leaders.

The co-chair of Legislature's joint rules committee, Sen. Steve Nass, R-Whitewater, has been among the most outspoken critics of the WEC. A spokesperson for Nass told WisPolitics.com that the panel would meet next week to suspend the rule.

The idea behind the original Elections Commission guidance, and the rule submitted to the Legislature, was to cut down on the number of absentee voters who might be disenfranchised.

In a summary explaining the rule, the commission said that it had formally examined the risk of voter disenfranchisement as it pertains to missing absentee ballot certificate information several years ago.

"This review led to the conclusion that many instances of potential disenfranchisement could be avoided through proactive measures by the municipal clerk," read the WEC summary.

The WEC rule does not require clerks to contact voters or witnesses before making corrections.

Should the rule be revoked, it could potentially affect tens of thousands of Wisconsin voters based on a review by the Legislative Audit Bureau.

As part of the bureau's election audit last year, it reviewed 14,710 absentee ballot certificates in 29 municipalities and found that 1,022 certificates were missing parts of witness addresses. That's roughly seven percent of all certificates reviewed.

Timing of the change would also be significant with the state's Aug. 9 primary just around the corner.